When I got up, the air felt cool, clean, thin, and bracing. The temperature this morning was in the low sixties; Evanston lies far from any major city or industry or source of heavy air pollution; the city is some 6,750 feet above sea level, so the air is much thinner than the sea level air I’m used to; and the combined effect made me feel cheerful, alert, and a little light-headed. I decided to take a walk in Evanston before I started the day’s long drive; Bear River State Park was just minutes from my motel, and soon I was walking along the Bear River. I left my binoculars in the car, because I needed to walk, not stand and look at birds; and of course there were many birds in the marshes and willows and green grassy fields around the river, and I soon wished I had brought the binoculars, but I managed to walk briskly for an hour without them.

As I drove down the highway towards Salt Lake City, I couldn’t decide which route to take. About an hour from Evanston, I stopped at a rest area that had Utah tourist information. There was a brochure for Bear River Migratory Bird Refuge — a different Bear River from the one I walked beside in Evanston, this was a Bear River in Utah that empties into Great Salt Lake. So instead of going through Salt Lake City and then driving west across the salt flats, I went north towards Idaho, got off the highway at Brigham City, Utah, and headed west to the auto tour route of the Bear River Refuge.

I generally dislike auto tour routes; I don’t like sitting in my car to look for birds, I prefer to get out and walk around. But this auto tour route proved to be exceptionally beautiful: driving on dikes through the Bear River delta, the flatness of Great Salt Lake to the south, the dry flat plain gradually rising up from the Lake to the north and east, towering mountains appearing at a distance in all directions, bright sun coming down through the dry, incredibly clear desert air; and all around the dike on which I drove was the incongruous sight of water in the middle of the desert. 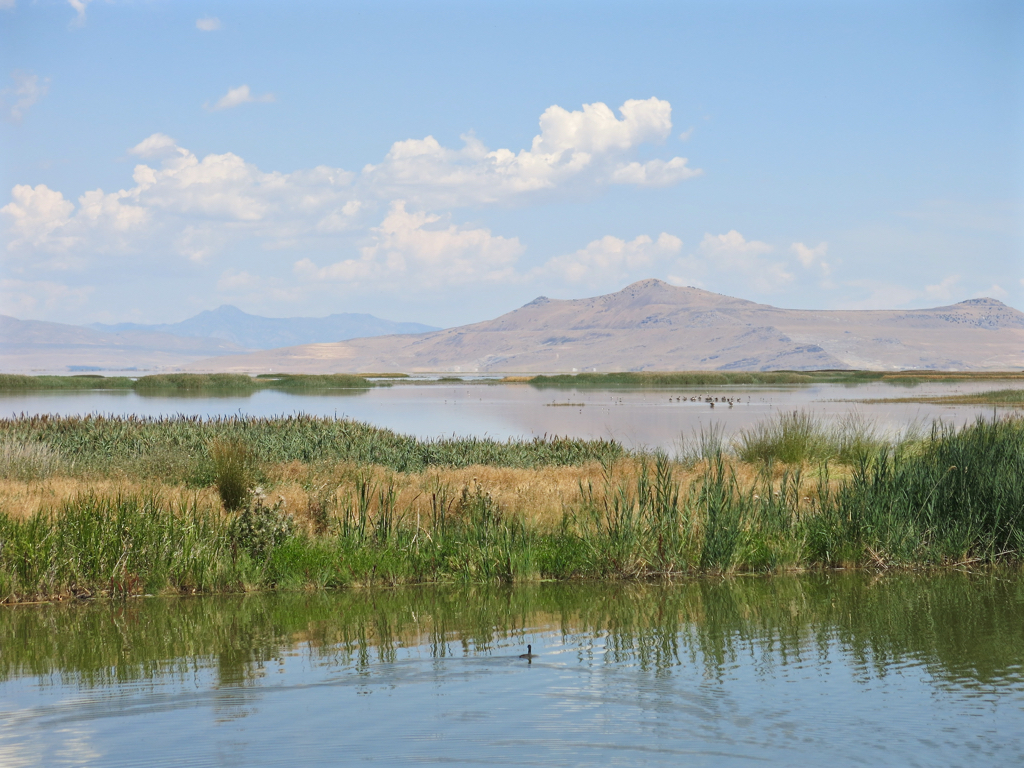 I spent two hours driving along the auto tour route, getting out frequently to to look at birds, or admire the landscape, or for no real reason at all. Had I had all day to spend, I would have liked to have walked all twelve miles of the auto tour route. But as it was, my average speed was just six miles an hour: plenty of time to see adult Western Grebes swimming with their fuzzy babies, and Cliff Swallow nests, and half a dozen American White Pelicans soaring in formation over the open water of the marsh.

From the refuge, I drove north on Utah Highway 82, past the turnoff for Promontory Point, past Orbital ATK with its exhibit of a huge NASA rocket, drove on the interstate for a few miles, then headed west on Utah Highway 30. A sign informed me that there were no services for the next 100 miles. There was very little to see but vast plains, sudden steep hills, mountains in the distance, and the slowly gathering clouds in the sky overhead. I drove through the village of Park Valley, where the Overland Trail Motel had once sold gas but was now closed, and saw two children riding horses up and down a large mound of dirt. More plains and cattle and carefully irrigated hayfields, then the hamlet of Rosette with a tiny post office. The road turned south towards the north edge of the great salt flats, and I stopped to stretch my legs — it had been a long time since I had left Bear River Refuge — and looked out over the salt flats in the distance. The plain I stood on tilted downhill, but when it met the perfectly level salt flats I had the impression that the salt flats were tilting up and away from me. Then the salt flats are so vast that you become aware of the curvature of the earth’s surface. I guessed I could see for a hundred miles or more. I am not used to seeing that far on land, and I found it disconcerting. 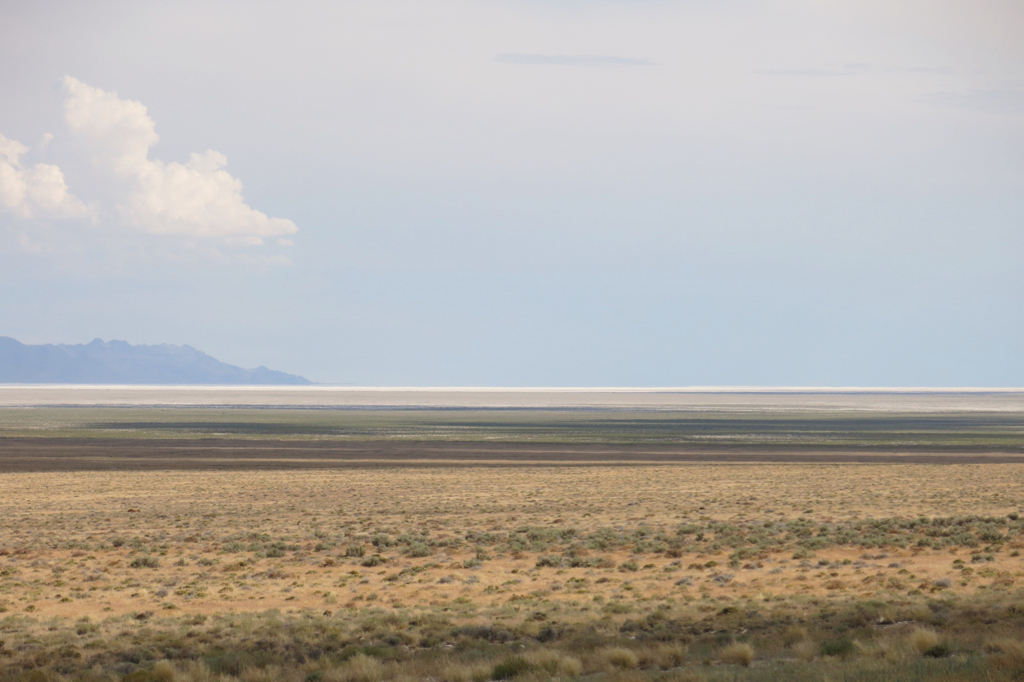 I kept driving across the open landscape, resentful if I saw another car — which was not often — feeling very much at peace. I realized that I had not wanted to drive through Salt Lake City, so even though this route was longer and slower, I was very glad I had come this way. At last I rejoined the interstate highway in Oasis, Nevada, and though there weren’t many vehicles on it, it felt busy and crowded. I am not looking forward to plunging back into the bustle of city life when I return home tomorrow.

At Pequop Summit, I pulled over to stretch my legs again. It started raining. It wasn’t a heavy rain, or a hard rain, but it was a steady light rain. The sage brush smelled strongly in the rain. I had to try to photograph rain in the middle of the Nevada desert, though you can’t see any evidence of rain in the photo — the air was so dry the pavement didn’t get wet — all you can see is dark clouds. There was a roll of thunder, and I got back in my car and continued driving west. 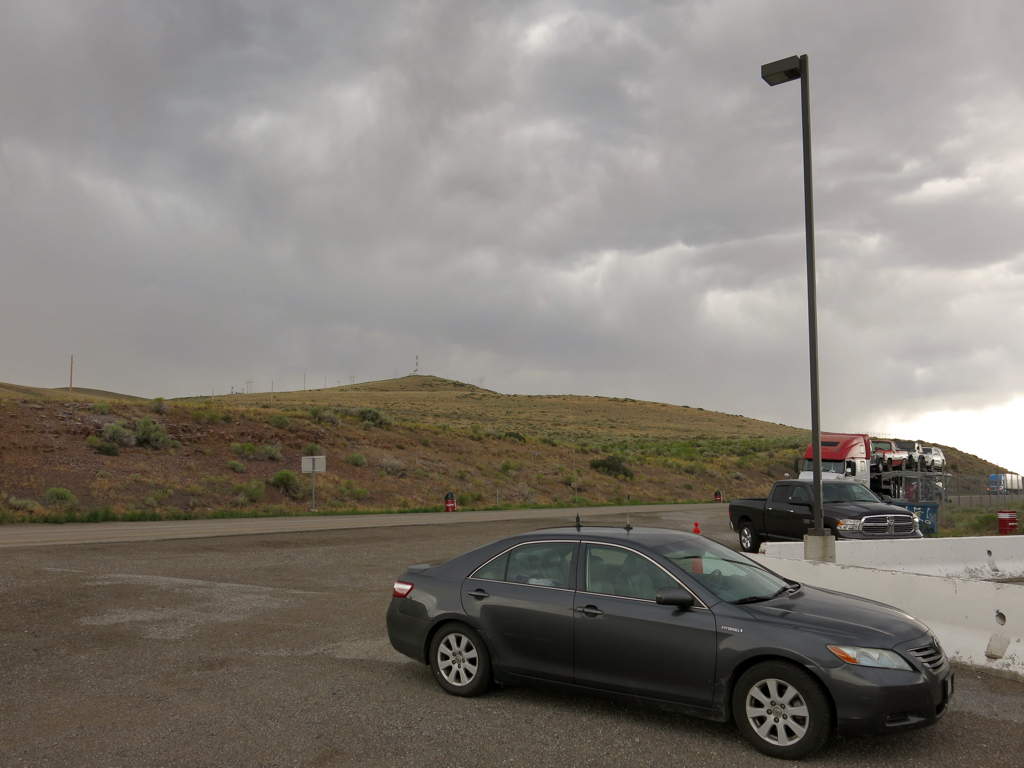 If I ever return to the area north of the salt flats, I’d like to go see Nancy Holt’s huge environmental artwork “Sun Tunnels,” about ten miles south of Utah highway 30.

I ate dinner at a Chinese restaurant in Elko, Nev., and the fortune inside the fortune cookie read: “You desire to discover new frontiers. It’s time to travel.” — an ironic fortune to receive when I’m about to end my travels and return to work.