I drove into DeSoto National Wildlife Refuge at about ten o’clock. The refuge comprises an oxbow bend of the Missouri River that had been cut off by the Army Corps of Engineers in order to shorten the main navigation channel. I had high hopes for DeSoto National Wildlife Refuge, but it had been over-developed, with carefully graded and graveled paths, and easy-to-drive roads, and large buildings, and distant refuge staffers who obviously saw too many tourists each day to want to spend more than the minimum time talking. The oxbow bend had been channelized by the Army Corps of Engineers before it had been cut off, and it too looked carefully arranged. I spent an hour and a half walking the short, easy-to-walk trail and looking for birds, and then I drove through the rest of the refuge, and as I drove back to the interstate I was just as happy to leave the refuge behind.

That unsatisfactory visit left me with no time to do anything during the rest of the day but drive, and listen to Great Expectations. As Great Expectations progresses, the impossible coincidences pile up, but the characters feel real, and the moral force of the book feels real, and so the coincidences of the plot quickly fade out of consciousness.

As I drove across Nebraska, the Midwestern Prairie gave way to the Great Plains, and the sky loomed larger and larger, and made me feel less and less consequential. Just before I got to Sidney, I pulled over at a rest area to check the directions to the motel. A large thunderhead towered to the south, to my left, and the sky to the north was covered in thick black roiling clouds lit from within every once in a while with a weird sickly orangey-yellow light. I got out to make a sketch of the thundercloud to my left, with the tiny new moon visible to the west in a patch of sky that was yet clear. I had done only a quick sketch when a gust of wind hit the trees behind me, and then a gust of wind hit me, carrying spattered rain drops, and I ran and got back in the car. The car rocked with the wind as I drove towards Sidney. Another spattering of light rain hit me as I got out of the car to check into the motel — but that was all; the main force of the storm passed to the north, and I was able to carry my luggage inside without getting wet. 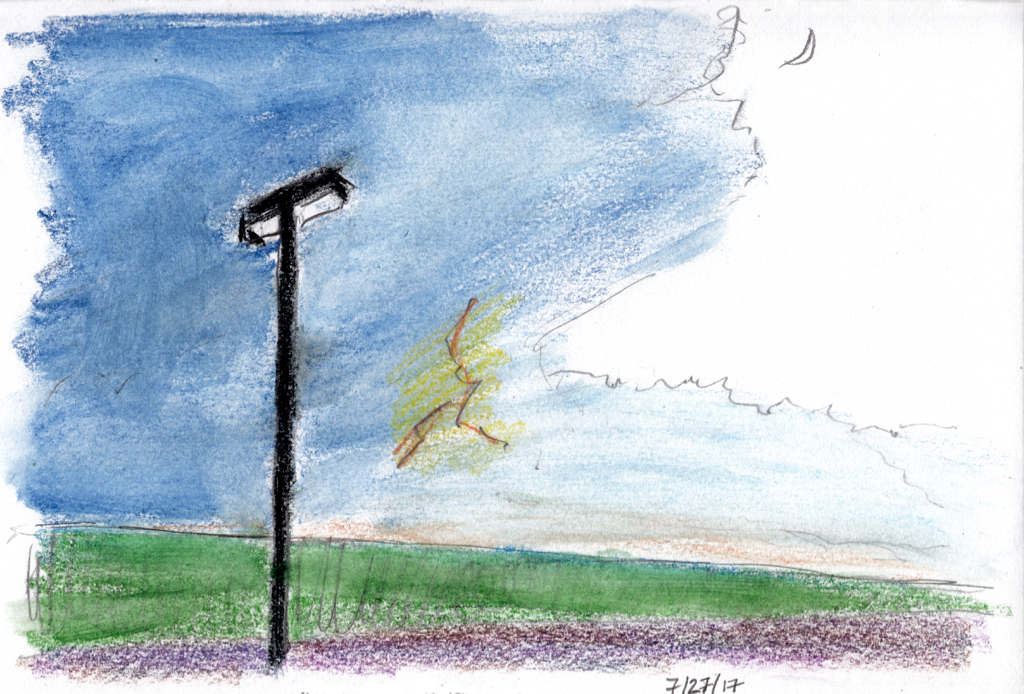