I made a detour to Port Louisa National Wildlife Refuge, along the Mississippi River about six miles north of Wapello, Iowa. It was 86 degrees when I arrived, and the dew point was probably in the low seventies: the air was warm and moist and smelled of fields and river bottomlands. I walked down the bluff to the bottomland. There was standing water not far from the trail, which the map told me was Little Goose Pond, a back water of the Mississippi River. Four Double-crested Cormorants sat in the topmost branches of a dead tree on the opposite shore of the back water, their mouths gaping open for no apparent reason. But I didn’t see many birds; mostly I heard birds, and often I couldn’t be sure what they were; I’ve left behind the eastern woodlands and moved into the prairies and plains of the middle of the continent, an ecological stage with a somewhat different cast of characters.

I stopped to talk to a member of the refuge staff who was cutting brush, aided by two summer interns. “Have you seen many birds?” he asked, looking at the binoculars hanging around my neck. “I haven’t seen many different taxa,” I said, “but I have seen quite a few individuals. Like there were about twenty Wood Ducks back there.” At this, one of the interns perked up. “Twenty?” he asked, somewhat skeptical. “I didn’t see them all, but I heard them,” I told him. We talked about Wood Ducks a bit, then the intern turned and pointed in the woods. “A deer.” I almost didn’t see it, skulking through the woods a good hundred yards away.

Back at the top of the bluffs, I was dripping with sweat. A few drops of light rain falling didn’t cool me off. I turned to look over the broad wooded bottomlands along the Mississippi, wishing I had an entire day to spend there. 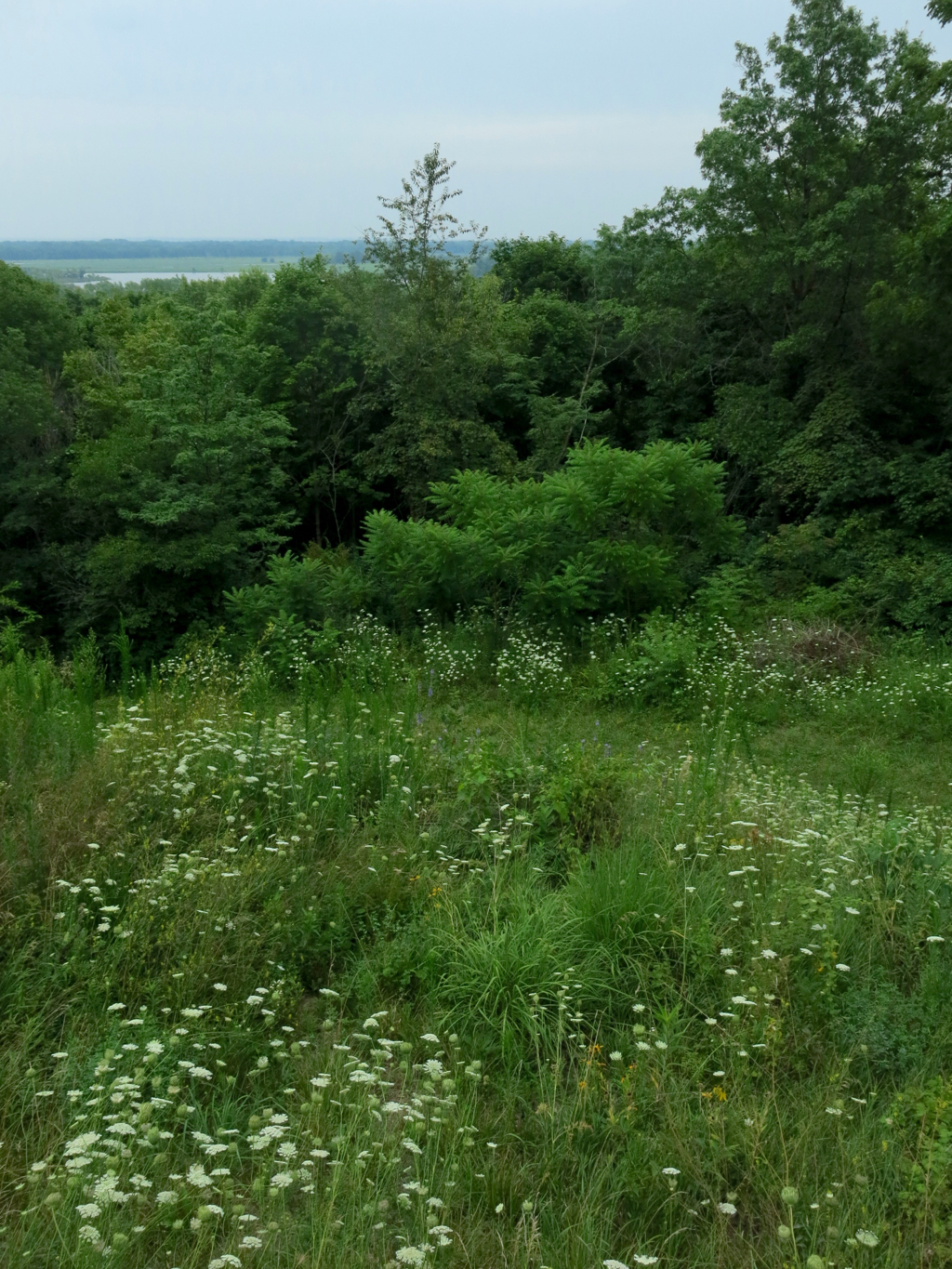 At a rest area west of Des Moines, I stopped because a blade from a wind turbine had been erected there. A plaque said it was 148 feet tall. The children playing on the playground below it, and the picnickers sitting at tables near it, made it look much bigger than the same-sized blades slowly turning on wind turbines on the ridge above. 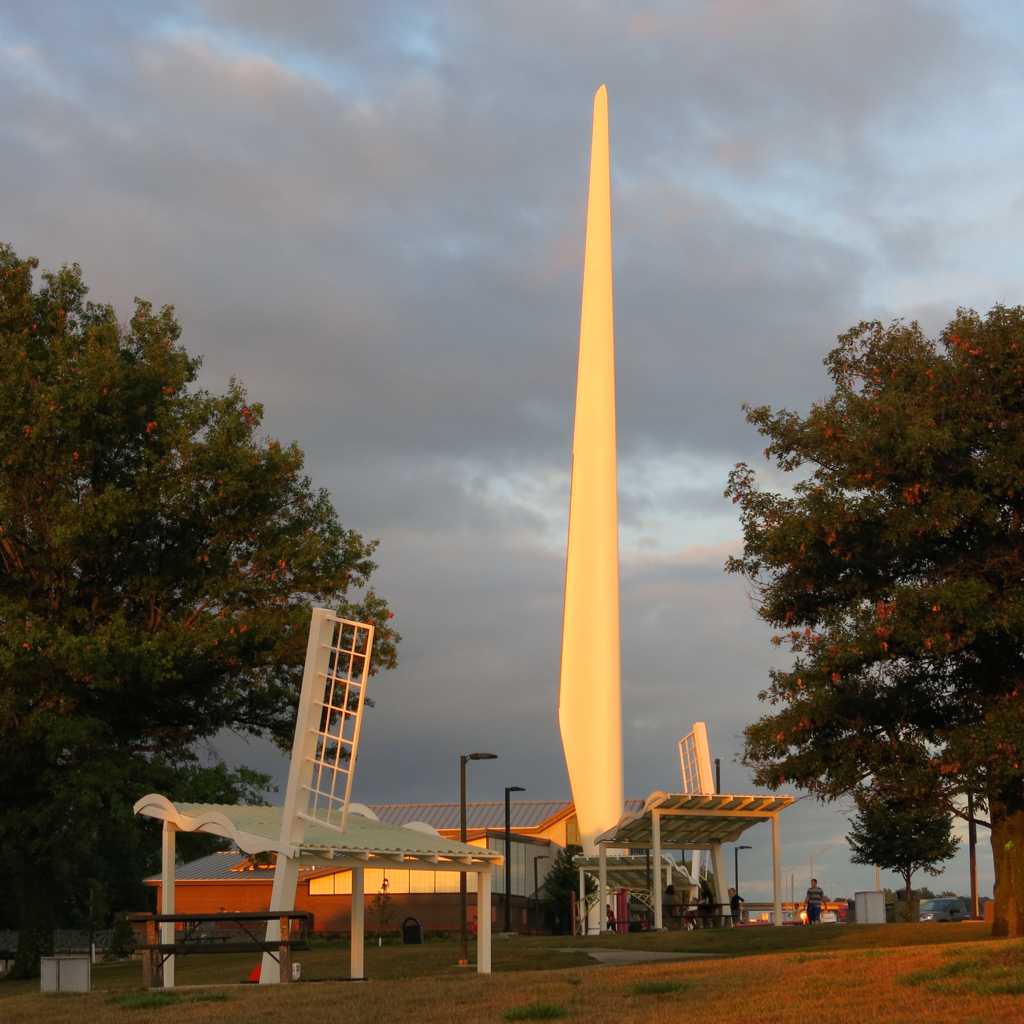 I pulled into Avoca at nine o’clock, and took a moment to watch the light fade over the steeply rolling hills to the west. The air temperature was just about at the dew point; mist began to gather where the land was lowest; the windows on the car were quickly covered with dew; and in the western distance it became hard to tell where the land stopped and the clouds started. 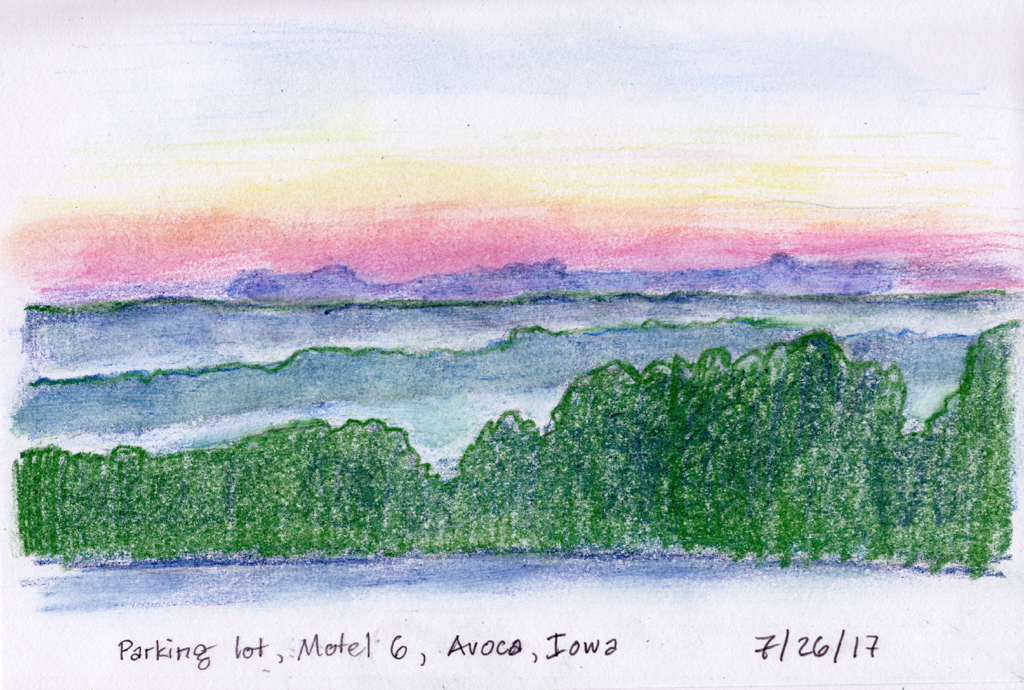