Another day when I got up late. I decided not to feel bad about it, because I had lost two hours in the past few days from crossing into more easterly time zones.

I grabbed a cup of coffee and drove immediately to Midewin National Tallgrass Prairie, which was just a few miles from the motel in which I spent the night, eating breakfast as I drove. I parked at the Goff Road trailhead, and at first I thought I had made a poor choice. I walked down a paved road, partially overgrown at the edges since it was only used by bicycles and farm equipment and National Forest Service trucks. The prairie on either side of the road has not yet been reclaimed here, and is still being farmed for soybeans. I thought about driving to another trailhead, but it was too late for that so I kept walking.

And soon I decided that I had made the right choice. The relatively wide paved road, along with a light breeze, seemed to keep the biting insects away, and it also afforded excellent views into the trees and brush that had grown up between the road and the soybean fields. Even though it was hot, even though it was the middle of the day, there were birds everywhere, and that’s what I had really come for. I turned to look up in a tree just as a Yellow-billed Cuckoo landed on a branch above me, a large green insect, maybe a grasshopper, grasped firmly in its bill. 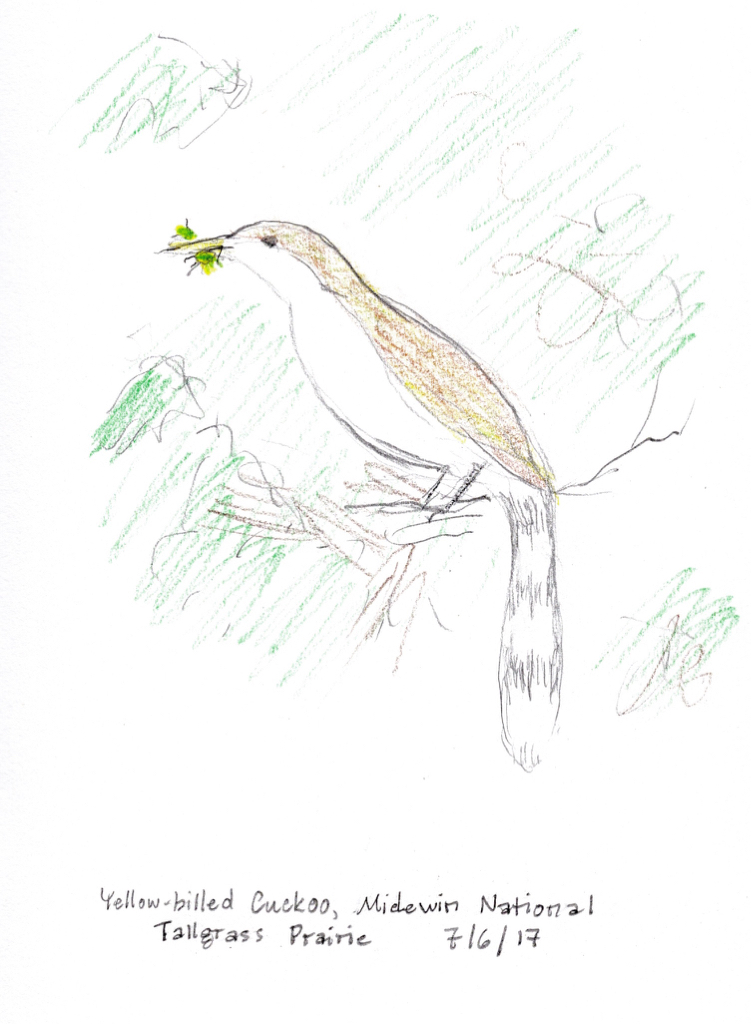 I walked for about a mile and a quarter, taking my time and looking for birds. I was dripping with sweat. It was time to turn back.

Not long after I turned back, a man on a bicycle pulled up beside me, and asked if I knew why the road was closed where I had turned back. I said that I had seen on the Midewin Web site that there were unexploded munitions and other hazards in parts of the land. It turned out that the man on the bicycle has been in the National Guard for something like twenty-five years, and in his early days he had had training sessions on what is now Midewin National Tallgrass Prairie but was then a military base.

We kept talking. I think he was happy to ride slowly, as slow as my fast walk. He said he had just gotten the bicycle; he was a deputy for the Will County Sheriff’s Office, and had recently taken training on bicycles for police; I finally noticed that his bike said “POLICE” on it in big letters. I asked him how he liked it, and he said that while he liked it, it didn’t do so well on some of the gravel roads he encountered in Midewin; but we agreed that every bicycle is a compromise.

We talked for most of a mile back to the parking lot. He told me about coming across some cows wandering in Midewin while he was riding a couple of days ago, and I told him about the handwritten sign I had seen on the gate at the trailhead: “Please close the gate, my cows are loose in here.” I showed him the map of Midewin posted at the trailhead, and told him how I downloaded one from their Web site. We shook hands, both said how much we enjoyed the conversation, and then as I was getting in my car he said, like a good police officer, “Drive safe!”

The rest of the day consisted of a mix of construction areas with stop and go traffic, construction areas with people driving too fast, and — every now and then — clear roads and easy driving. between the construction, and crossing into the Eastern Time Zone, I found myself getting further and further behind schedule. I decided I had better look into returning via Interstate 70, to avoid the horrendous backups at Chicago. But I had hoped to drive up into Michigan — the one state of the lower forty-eight that I have not yet been to — on the return trip.

There is one exit between the Indiana Toll Road and the Ohio Toll Road, and on a whim I got off there and drove north a few miles till I was well inside the Michigan border, then turned around and drove back to the interstate. That put me even further behind schedule, and it was ten thirty when I finally pulled in to the motel in Mentor. Carol had texted me earlier in the day: “Mentor, OH — I was a girl there. Look for the rose farm.” But it was dark and I was late, and I did not see a rose farm.