The day did not start well. I awakened in the midst of a dream about work — you know a vacation is almost over when thoughts of your job work their way into your dreams. And then when I got to the Minidoka National Wildlife Refuge in mid-morning, I found out that I would need a high-clearance vehicle to access the interesting parts of the refuge. So I drove on towards Winnemucca, trusting to luck.

I followed a sign pointing to Shoshone Falls, and pulled over at the Hansen Bridge overlook. The view from the little parking area was dramatic — the bridge crossing a nine hundred foot wide canyon some four hundred feet above the Snake River. I thought that maybe if I kept walking on the adjacent Bureau of Land Management property, the view up the canyon towards the bridge would be even more dramatic, and it was. I climbed down and out on the volcanic rock of the canyon rim and watched Swainson’s Hawks and Red-tailed Hawks circling far below me, startling flocks of Rock Pigeons roosting in holes in the cliffs as they circled past. 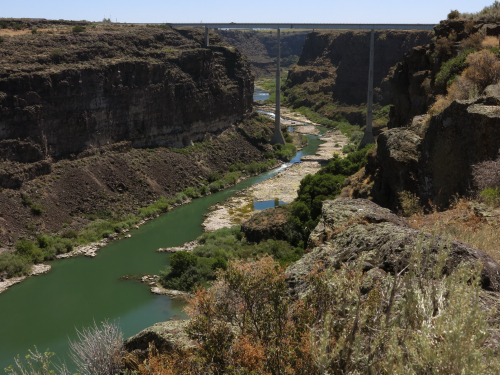 Then I looked down the canyon, and that view was also dramatic: the canyon became broader, and the river divided into several streams, flowing around islands in the middle of which were buttes, the green of the riparian corridor making a strong contrast with the harsh black cliffs of the canyon walls. I walked around for three quarters of an hour, entranced by the view down into the canyon. 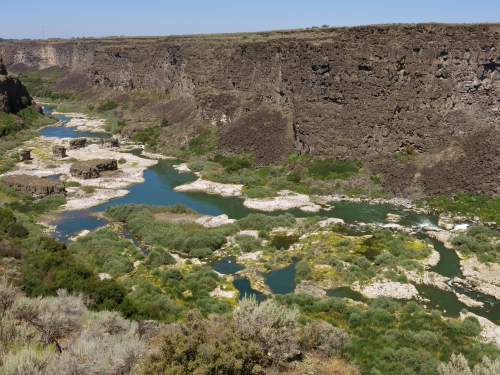 At last I drove on to Shoshone Falls. There isn’t enough water in the summer to make the falls truly dramatic, but they were dramatic enough. I was almost more interested in watching the tourists watch the falls, than in watching the falls themselves. I thought about walking up the trail to where Evel Kneivel jumped his motorcycle across the canyon, but instead drove up to Dierke’s Lake, which lies in a large flat bench partway down the canyon. The swimming area was swarming with people, including lots of children; it was a friendly, homey scene. I walked up past the swimming area and wound up talking with a man from San Jose who was taking his daughter to tour colleges.

From there, I drove on, stopping briefly in Jackpot, Nevada, where I chatted with the cashier at the grocery store where I bought my lunch-time caffeine; she said Jackpot was the kind of small town where you knew everyone, though she admitted that winters could be kind of long. I ate my lunch at a highway rest area by the side of a stream. Of the three picnic tables in the rest area, two were occupied by single men who appeared to have a lot of possessions with them; one of them had a friendly chat with the workers who stopped to empty the trash cans and restock toilet paper at the pit toilets. I assumed these two men lived in or around that remote rest area.

In Wells, Nevada, I stopped at the Emigrant Trail Center, and talked with the volunteer who was staffing it today. He had grown up in Wells, which began as a railroad town — his parents worked for the railroad — and when the railroad reduced its operations in the late 1960s, jobs shifted to supporting the new interstate highway that came through town. The ranchers in the area, he said, also contributed a good deal to the local economy. After the earthquake of 2008, which destroyed many of the old historic brick buildings in the town, a vein of gold was discovered, and plans are now being made to mine that vein — which, he hoped, would add more jobs to the local economy. On my way out of town, I stopped to take a picture of the Community Presbyterian Church, which — so said my friend who grew up in Wells — had stood for more than a century, pretty much unchanged. 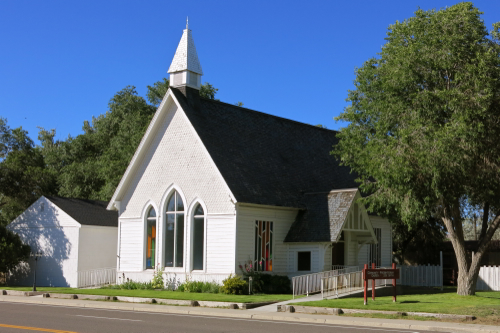