“At the border of the [Great American] Desert,” said Mark Twain, “lies Carson Lake, or The ‘Sink’ of the Carson, a shallow, melancholy sheet of water some eighty or a hundred miles in circumference. Carson River empties into it and is lost — sinks mysteriously into the earth and never appears in the light of the sun again — for the lake has no outlet whatever.” Although I had no interest in walking forty miles across the Great American Desert, without water, as Mark Twain had to do when he was taking the stage coach to Carson City, Nevada, I was interested in seeing the Carson Sink, so I left the interstate highway and drove down U.S. 95. There was no water in the Carson Sink when I drove through, just thousands of acres of bleak desolate salt-encrusted, dried-up mud. The Bonneville salt flats west of Great Salt Lake in Utah are pristine white and shine in the sun, and look sublimely beautiful; but the Carson Sink looks like dirty snow, with more dirt than snow, and looks merely grim.

South of the Carson Sink, the land rose, and grew greener and greener, and there were ranches on either side of the highway, and then I was in Fallon, Nevada, the self-proclaimed “Oasis of Nevada.” I turned east on Nevada Route 116, drove some ten miles through hay fields and ranch lands, passed through the little hamlet of Stillwater, and then out into the 77,000 acre Stillwater National Wildlife Refuge. East of Stillwater, the land grew steadily drier and less hospitable, and it seemed like the only vegetation was clumps of black greasewood (Sarcobatus spp.). 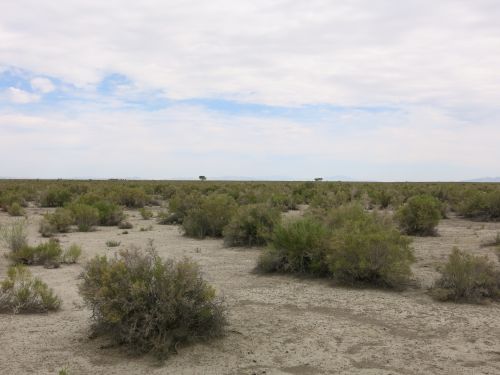 When I went around a bend in the road and suddenly saw open water, I thought at first that I was seeing those heat mirages so common in the Nevada desert. But no, it really was open water, surrounded by tule rushes and cattails. 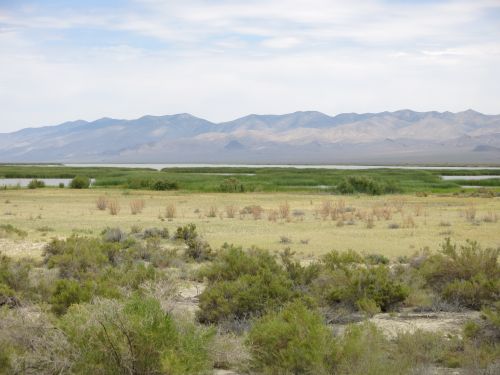 The Stillwater marshes provide breeding grounds for many birds, and I saw juveniles of several species, including American Coots, Eared Grebes, Pie-billed Grebes, Ruddy Ducks, and various kinds of swallows. I saw Great Blue Herons, Loggerhead Shrikes, Snowy Egrets, Virgina Rails, White Pelicans — and watching huge White Pelicans glide in graceful formation against the backdrop of distant rugged desert mountains was a sight worth seeing. There were other animals in and around the marsh, too — lizards, and some hidden animal, probably a muskrat, that moved noisily among the rushes just at water level about five feet from where I stood, and and half a dozen jackrabbits. 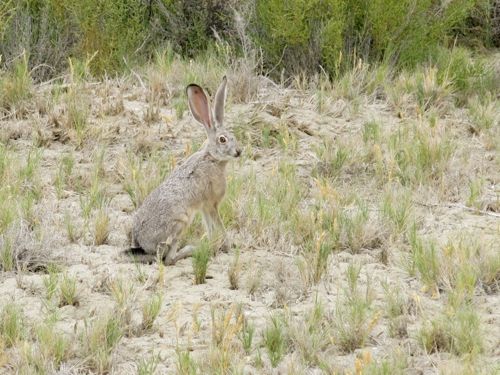 Mark Twain calls this animal a jackass rabbit: “He is well named. He is just like any other rabbit, except that he is from one third to twice as large, has longer legs in proportion to his size, and has the most preposterous ears that ever were mounted on any creature but a jackass.” One of the jackass rabbits I saw started from cover when I got too close, stopped when i froze and stared at me with big black and yellow pop-eyes, let me take a photograph of it, then started suddenly and bounded away and lost himself among the clumps of greasewood.

When I got to Stillwater National Wildlife Refuge, the sky was overcast, and the temperature was about 85 degrees — a very pleasant temperature in the dry desert air — but slowly the sun came out and the temperature climbed up to 97 degrees, and there wasn’t any shade to speak of, and I decided it was time to move on. When I sat in the car, almost instantly my back grew wet with sweat; it had been so dry that my sweat dried almost instantly as long as the air could get to me, but once the air was blocked off it soaked my shirt.

From North Dakota to central Nevada the highways are lightly traveled and there were many times when I couldn’t see another vehicle in front of me or behind me. But from Reno to the Bay Area, the highways are heavily traveled, and they wind and twist and go up and down abruptly, and I had to dodge the occasional crazed driver (all of whom seemed to have a California license plate) who thought it great sport to suddenly change lanes and dodge in front of me and slow down and speed up with no apparent rhyme or reason. Driving was no longer enjoyable, and I settled down to suffer.

From Maine to California, I had periodically been monitoring 29.600 MHz, the amateur radio national calling frequency for FM simplex, and in all those miles and hours had heard nothing but static. The driving required too much of my attention to want to try to listen to an audiobook, so I turned on the little 10-meter band radio and started listening to static. Just east of Sacramento, I realized I was hearing someone giving a call sign with a Hawai’i prefix. I replied, he heard me, and I wound up talking to Norm, who lives on the Big Island, some 2,450 miles from Sacramento. Traffic got bad so I had to end the contact — and of course by the time traffic got more reasonable, ten miles west of Sacramento, I could no longer hear Norm, and there was nothing but static once again.

And here I am, back home once more. I like the fact that I don’t have to worry about driving six or seven hours a day any more. I like seeing Carol again. I’m even looking forward to going back to work on Sunday. But I wish vacation weren’t over.