Every once in a while on a long trip you have a day where nothing goes wrong. That happened today. In fact, today was as close to perfect as I’ve gotten on any cross-country trip. I got up on time, and got on the road on time. The drive was easy, with little traffic and no delays. I arrived at Camas National Wildlife Refuge at four o’clock, with at least four hours to spend there.

The refuge consists of over ten thousand acres of varied habitat — open water, marsh, seasonally dry ponds, uplands with bunch grass and sage brush — along Camas Creek. The refuge provides habitat protection for breeding and migrating birds, but hunting and agriculture are also allowed in parts of the refuge. 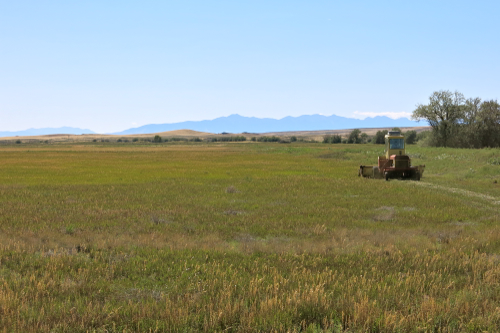 The weather was perfect, with a temperature of 79 degrees, dry air, light variable breezes, and perfectly clear skies. Almost as soon as I pulled into the parking lot near the refuge headquarters, I flushed a Common Nighthawk from where it was roosting in a tree, and with the sight of it circling around over me calling with a plaintive “peent, peent,” I found myself detached from any thought of workaday affairs. And it got better from there. When you come across inviting green marshlands with large areas of open water in what is close to being a desert landscape, with just over ten inches of precipitation a year, it is an amazing and refreshing sight. 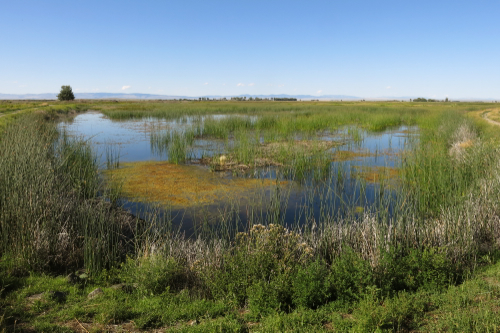 The marshlands were teeming with birds. Admittedly, most of them kept far away from me, and I would have seen more birds if I had had a scope. But the light was excellent, and I could make out many of the birds I saw, even from a distance. I saw a good number of birds that had hatched this year. I saw two Trumpeter Swans accompanied a cygnet, a great many Mallards with ducklings, and lots of American Coots with their young — these three species are captured in the photo below, about as they appeared through my binoculars — as well as many other juvenile birds. 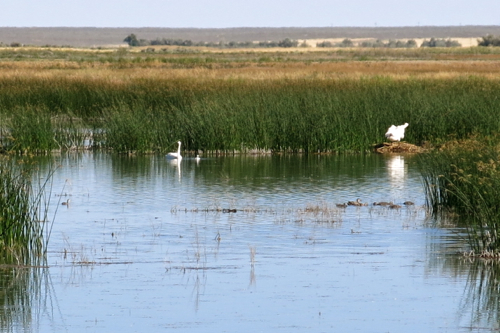 The refuge staff manage the water levels in the pools to maximize food sources, and several of the ponds had been allowed to dry out. These dry ponds looked stark and lifeless at first. 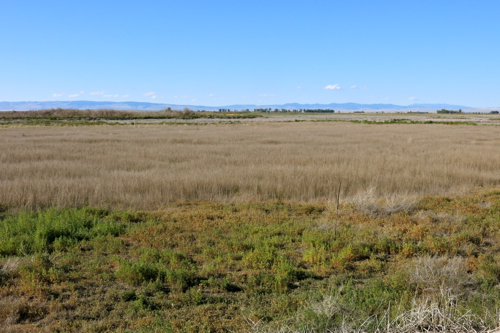 But a closer look at one of them revealed five Pronghorn Antelope — four adults and one juvenile — who were watching me cautiously. I stood watching them watching me, and as I did so a car drove by without even slowing down. A little boy looked at me through the rear window, and I wanted to tell him to tell his parents to turn around and come back and look — but then I got distracted by two juvenile Northern Harriers flying low over the dry grass.

If there was a disappointment in an otherwise perfect day, it was that I didn’t see any Sage Grouse, even though I spent half an hour walking along a trail in the upland habitat near dusk. These uplands hardly merit the name based on elevation, for they are only about ten feet above the level of the marshlands. But that ten feet is enough: the soil is dry gravel, and the vegetation is dominated by short bunch grass — dried a crisp brown in late July — and sagebrush. But I was more than compensated by this disappointment a little later. While I was sitting eating my picnic dinner, with the sun about to set behind the distant mountains, two Swainson’s Hawks tried to roost in nearby trees, only to be repeatedly attacked out by brave Western Kingbirds, and after ten minutes finally driven away, screaming loudly. It was a dramatic conclusion to the day.

I suppose if you are not all that interested in birds, this may not sound like an almost perfect day. Really, though, looking for and identifying birds wasn’t the point. I think we human beings are meant to be outdoors as much as possible, and we are meant to be interacting with other living things as much as possible; evolution has shaped us to this end. Computers and automobiles and toilets and hospitals have made our lives easier and longer and more comfortable, but not necessarily better and more soul-satisfying.

Posted a day late due to poor Internet connection.