Of course I awakened late. First of all, I hadn’t gotten into the motel room until 11:30 the previous night. Second of all, the time I awakened might seem late in the Eastern time zone but in the Pacific time zone I got up at six o’clock. When I finally got to Erie Bluffs State Park, it was half an hour before noon.

Erie Bluffs State Park, the largest undeveloped stretch of Lake Erie lake front in Pennsylvania, is mostly fields and woodlands. There is a boat launch, and there’s a tiny beach at the mouth of Elk Creek. 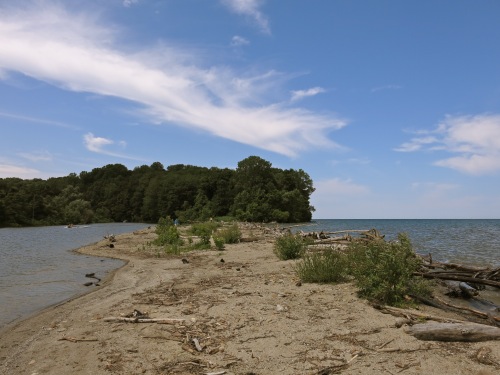 But, as I say, it’s mostly fields and woodlands. I walked down through the woods to the shore. The trees were mostly maples and oaks, with some nut trees and sassafras — typical woodlands of the middle Appalachian region, and very similar to the woodlands I got used to growing up in eastern Massachusetts on the eastern edge of the hills of central New England. The woods felt familiar, more familiar than the town I grew up in which has been so altered by development and gentrification, and so many of the woodlands built up with very expensive houses, that it no longer feels like the town I once knew. But there were still surprises in the woodlands of Erie Bluffs. I came across a downed tree covered with some kind of insect I had never seen before, coming out of its larval stage to its adult stage. 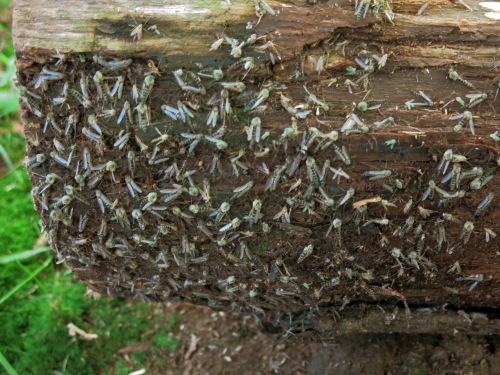 There wasn’t much to see at the shores of Lake Erie except people on personal watercraft bouncing over the chop raised by the northeast wind. I got tired of their buzzing, and the faint stench of two-cycle engine, and head back up the bluffs to the fields. The eastern fields at Erie Bluffs cultivated, with what I think was an annual rye grass, some kind of seed-bearing grass that probably provides good foraging for migrating birds. The western field is not cultivated, and it was filled with birds: Field Sparrows, Blackburnian Warblers, Indigo Buntings, Baltimore Orioles, and many more birds took advantage of the ecotone, the edge zone between the woodlands biome and the field biome. 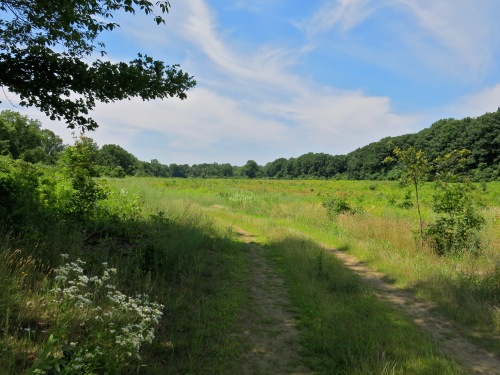 After dark, I stopped at a rest area somewhere in upper New York state. By that time, there was little traffic on the highway, and few people in the rest area. Just one other person was waiting for coffee at Starbucks, and she and I got into a conversation with the two workers at Starbucks. I asked the workers if they got time and a half for the holiday, and they said they did. But, they said, no benefits. I told them I thought Starbucks had good benefits, but they said they were actually employed by the company that runs the rest area, a company which pays minimum wage, provides not benefits, and does not allow them to take tips. The other customer and I commiserated with them. She — the other customer — said she drove that stretch of highway regularly, because one of her children was involved with Circus Smirkus. We both said we love to drive, and we both agreed that the best time to drive was after dinner, after the crazy drivers got off the road. When I left, I told one of the workers that I wasn’t leaving a tip, because that wasn’t allowed, but it looks like I left some money on the counter by mistake so they better keep it.