I was sleepy today, and had to stop twice in rest areas to take long naps. I tend to drive myself pretty hard at work, even when I’m on sabbatical, and I suspect my body is constantly putting out a little adrenalin to keep me moving fast. Now I’ve been away from work long enough that the adrenalin has stopped, and it makes me sleepy. Because of the naps, I got in late tonight, so this will be a short post.

In the middle of the day I stopped for a walk at the Kuehn Conservation Area in Dallas County, Iowa, three and a half miles along well-graded gravel roads from the interstate. A cold front had gone through last night, with thunder and lightning, and the day was cool and gray; the grass was wet, and the sky still threatened showers. There was not another car in the parking lot. I walked around the upland meadows, looking and listening to the birds, all from the eastern half of the continent — no more Chestnut-backed Chickadees, now there were Black-capped Chickadees; no more Scrub Jays, now there were Blue Jays; no more Western Bluebirds, but rather Eastern Bluebirds.

I walked down a wooded bluff into the Bear Creek valley. The rolling grasslands near the creek were damp and unbelievably green to an eye which has become accustomed to dry, drought-ridden California. You could see the humidity in the air, turning everything a faint blue. 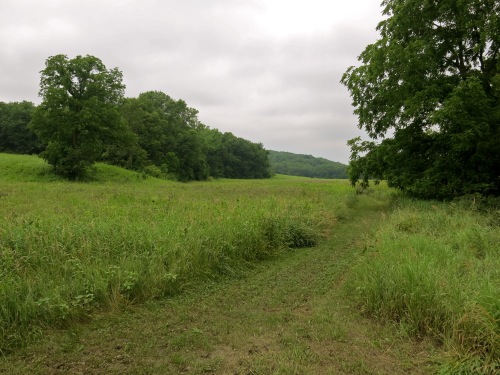 But what really captured my attention were the variety and number of butterflies. I must have seen ten different species (not that I could say what species they were, but they were so obviously different), and a great many individuals: flittering through the grass, basking on the mud or gravel, dodging in and out of the brush in the woods, sitting half hidden in the leaves. 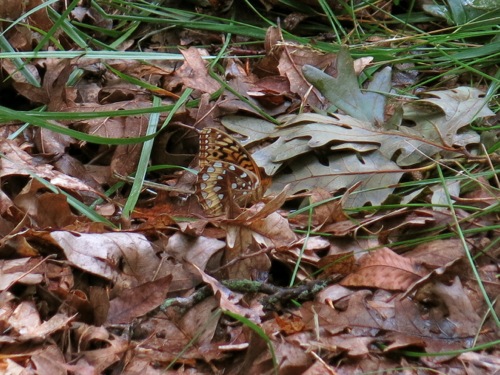 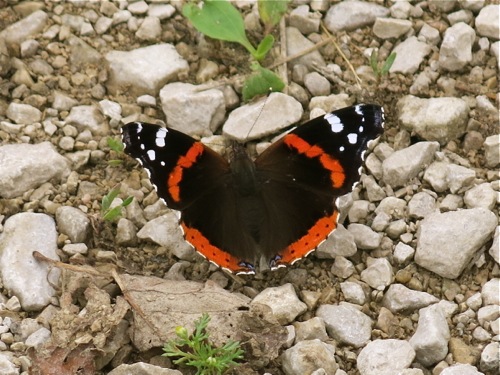 The rest of the drive was uneventful. I drove, it rained off and on, I stopped in Grinnell, Iowa, to find Chinese food and a bookstore, I drove some more, took another nap, it rained, and slowly it got dark. I knew when I was getting close to Chicagoland because there were more buildings, more cars, more people. I have now left behind the lightly settled western two-thirds of the United States, and entered the busy, crowded, bustling eastern third of the country.