From my dad’s condo, I drove along Route 117 to get to the interstate highway. In Stow, I remembered I needed to get gas before I got on the highway, so I stopped at the little gas station at corner of Hudson Road. Ed and Nancy used to live just up the street from there, and it was a little disconcerting to remember that they now live in Wisconsin, and that I would be seeing them at the end of the week. I bought a copy of the local newspaper, the Stow Independent, to bring to them; a quarter of a mile down Route 117, I stopped at Applefield Farm to buy blueberries and carrots, but those will get eaten long before I get to Wisconsin.

The drive down to Pennsylvania is not all that interesting. Traffic is always heavy enough that you can’t really look at the scenery, when there is scenery worth looking at. You also have to figure out which route you’re going to take: from Hartford, will you take Interstate 84 or the Merritt Parkway through Connecticut? from the Tappan Zee Bridge, will you take the Palisades Parkway or the Garden State Parkway to get to the New Jersey Turnpike? when the Jersey Turnpike divides, will you go on the cars-only side, or the cars-buses-and-trucks side?

I passed by one of New Jersey’s refineries, and the smell brought back memories of all the trips my family took to Staten Island to visit my grandmother. In the 1960s, the highway system was not as well-developed, and the drive would take nine hours. Dad would take a day off from work, we’d pile in the car, Jean and I would annoy each other in the back seat (“I’m putting up an invisible shield, and you can’t get me!” “There! I put my hand through your invisible shield!” etc.). We’d pull in Friday night, Grandma would give Jean and me each a big hug, and we’d sit down to dinner. On Saturday, Dad would work the whole day around the house for Grandma, and Jean and I would play in the basement, or read books in the little room off the stairs. Grandma’s next door neighbors Dave and Alice would usually stop in for a visit. Dave was a big man, over six feet tall I think, a New York City cop, and when I started to get tall he told me that I had to learn to stand up straight instead of slouching over. Then on Sunday we’d drive home. We’d make this trip two or three times a year, and we all got to know that drive pretty well. Mom and Dad would debate whether to take the Merritt Parkway, or the new route, Interstate 84. When the Verrazano Narrows Bridge from Brooklyn to Staten Island opened, we drove across it — but just once, and never again, because going through Brooklyn took forever. Sometimes we’d get to stop at a Howard Johnson’s for lunch, though mostly I remember Mom packing lunch for us. And when we drove past the refineries, in New Jersey, Jean and I would loudly exclaim that it stank, and we’d roll up the windows until we were past.

Driving in the northeast corridor is not like driving out in the Far West, where traffic is almost always light and people do not routinely drive like maniacs. I remember the radio raconteur Jean Shepherd talking about driving down the New Jersey Turnpike, and looking in his mirror only to find that the driver behind him was so close that he was using Jean Shepherd’s rearview mirror to shave. When I finally got to the New Jersey Turnpike, I was feeling a bit frazzled. I pulled over at the Vince Lombardi Service Area to relax for a few minutes. The Vince Lombardi Service Area was huge, and not particularly relaxing. Hundreds of semi-trailers filled the truck parking lot. 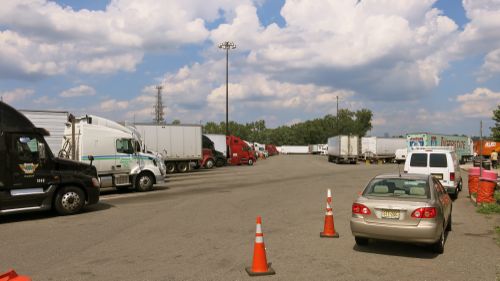 The parking lot for cars was also active, with cars and people coming and going constantly. The last time I had stopped at the service area was in the 1990s, and back then they had had Vince Lombardi memorabilia on display. But now the entire service area was devoted to retail sales, fast food joints and a coffee shop and a travel store. more and more, this is the fate of our public spaces: they are dominated by sales of consumer products, or advertisements featuring consumer products. I missed the replica of the football stadium Vince Lombardi’s team played in, a model built entirely of matchsticks. It was kind of stupid, but definitely worth looking at.

The rest of the drive was more of the same. I was glad to pull into Steve and Cheryl’s house in Paoli, and sit down to a peaceful dinner with uncle and cousins.