The wind storm from yesterday continued unabated. The National Weather Service warned of sustained winds of twenty to thirty miles per hour, and gusts up to sixty miles per hour. It was an unpleasant drive from Dickinson to Theodore Roosevelt National Park, and I was glad to park the car at the trailhead for the Paddock Trail. As soon as I parked the car, I realized that I was right next to a Prairie Dog town; thirty feet from the car, a Prairie Dog sat feeding at the entrance to a hole, warily keeping an eye on me. 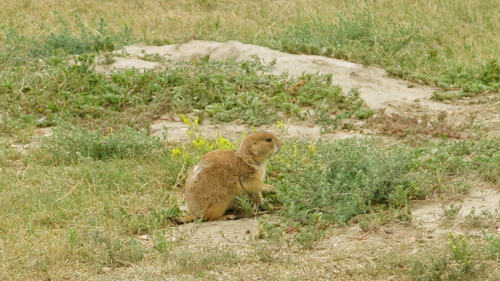 As i looked around me, I saw more and more Prairie Dog holes, lighter-colored mounds of earth dotting the close-cropped vegetation. The mounds started near the edge of a creek and extended up a gently sloping plain to the foot of a butte. 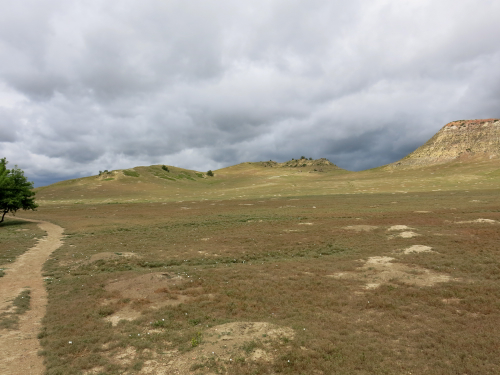 I estimated that the town covered an area of several acres. I walked up the Paddock Trail to the end of the town. Wherever I walked, a Prairie Dog would give a shrill alarm call, poised at the opening of a hole, ready to dart down inside when I got too close. I saw a pair of Mountain Bluebirds and an immature American Robin hopping around in between the holes; perhaps they were feeding. As the ground rose beyond the edge of the Prairie Dog town, I was more exposed to the full force of the wind, and to occasional spatters of light rain. It wasn’t fun, so I turned back, and decided to try the Jones Creek Trail. It turned out to be a little bit more sheltered, and I walked in for about half an hour, beneath the protecting buttes and amid the sagebrush. 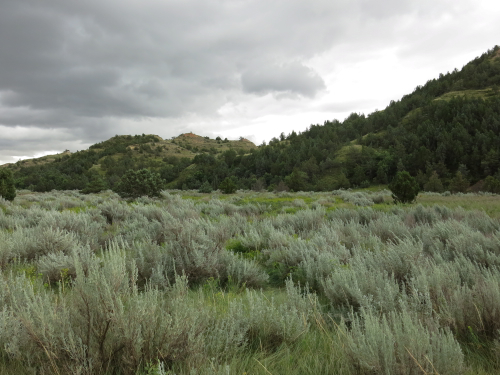 Two female Northern Harriers flew above me, one apparently pursuing the other, twisting and turning through the tree tops, screaming at each other in the face of the high wind. I wanted to just keep walking for the rest of the day, but I had to drive halfway across Montana before nightfall, so I headed back.

When I was almost to the car I saw two people with binoculars around their necks. “Did you see the Harriers?” I said excitedly. They looked at me blankly. “Harriers?” said the man. “You’re not birders?” I said, pointing to the binoculars. “No,” said the man, with undisguised scorn. “Never mind,” I said, and didn’t bother to tell him what he had missed.

I stopped in Beach, North Dakota, for lunch; I avoided the fast food joint right next to the highway and drove a mile into the town and found La Playa Restaurant was open. In the restaurant, classical music was playing, and the young woman at the counter said, “Sit wherever you want, but not at a table that’s not clean yet.” A man with a graying pony tail sat across from a thin middle aged woman and talked about people they knew. An older woman with a grumpy face said to a young waitress, “There’s no lettuce left at the salad bar. The eggs are gone, too.” I ordered a small steak, medium rare. “Here’s your steak, darling,” said the waitress, and it came cooked perfectly. An elderly man and woman walked in, having a conversation that I’d describe as eccentric, with leaps of logic that I couldn’t follow. It was after two o’clock, and the music switched to a country rock radio station. The grumpy-faced woman ate methodically and stoically. I paid my bill, left the restaurant, and drove around a couple of blocks of downtown Beach. The town had a friendly feeling to it, and I particularly liked a hand-lettered sign in the park: PET POOPS YOU SCOOP. 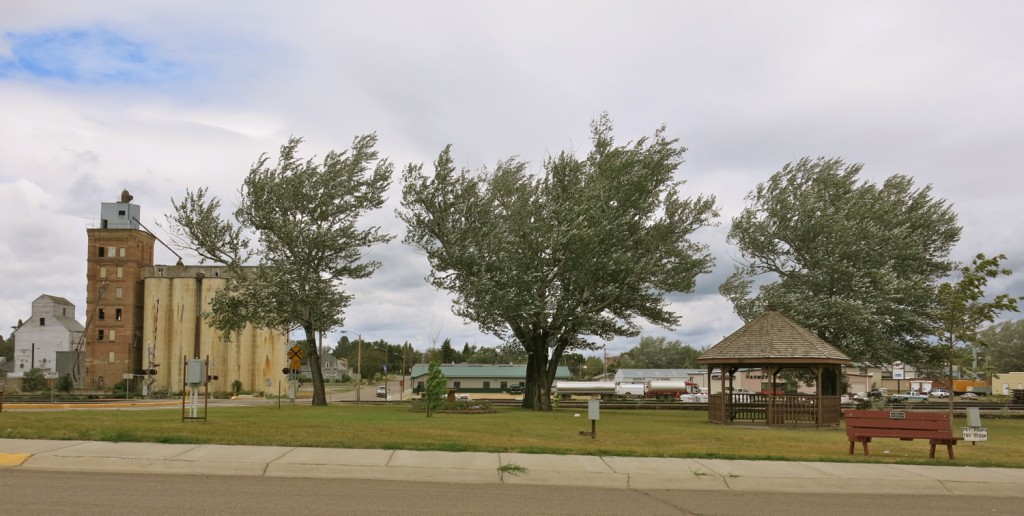 The highway wound through the buttes and over the rivers and creeks of Montana. I was driving right into the teeth of that strong wind, so strong that the car was using about a fifth more gas than usual. I stopped for gas, and kept driving: a broad plain with cultivated fields; fantastically eroded buttes; a glimpse of a river with muddy water; softly rounded buttes; huge rolls of hay; cattle at a water hole; a small valley with a cluster of ranch buildings and trees whipping in the wind; another creek; another butte; the landscape passed by, always a little different, slowly changing as I drove onwards, the big sky overhead. I had a recording of of Terry Reilly’s minimalist masterpiece “In C,” and it seemed to fit the passing landscape perfectly: slowly changing, a sense of excitement and discovery slowly waxing and waning.

I stopped for a moment at a roadside rest area where I looked out over Rosebud Creek. The old Chinese art critics said the highest form of landscape painting depicted a landscape that you could wander in. This was a landscape you could wander in: the railroad winding between a cliff and a river; a large island in the river; ranch buildings just visible hear an there among the wide-spaced trees; mysterious bluffs in the distance leading to a hidden prairie beyond. 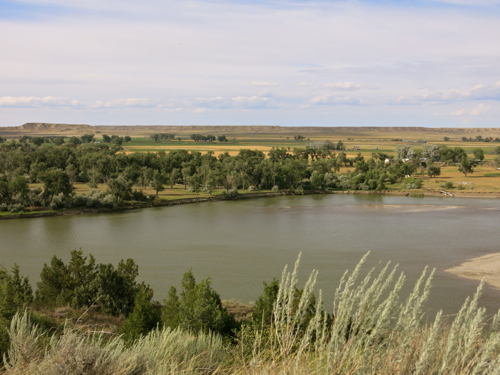 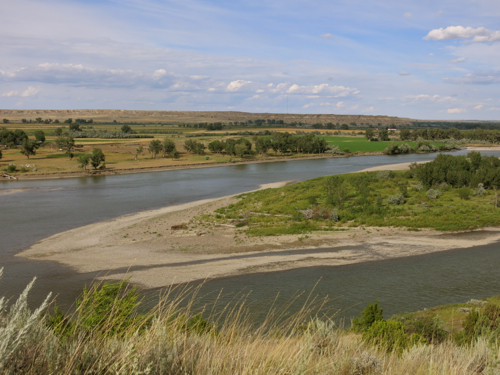 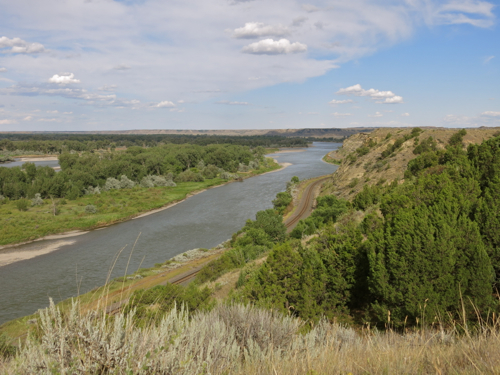 By the time I reached Billings, I had to buy gas. Carol had said Billings was worth stopping in. Had Carol been with me — Carol, that best of traveling companions, who always knows where the interesting places are to be found in any city — I’m sure I would have found the funky quarter where there are good cheap restaurants, a farmer’s market, a used bookstore, and a coffee shop with free wifi. But since Carol could not come on this trip, all I found was a supermarket and a gas station.

This post is for Carol, who asked for lots of photos.