We started driving at nine in the morning, quickly leaving behind the crowded roads of Chicagoland.

Water towers are prominent features of the midwestern landscape, and traditionally the municipality that owns the water tower will paint its name on the side. Stuart, Iowa, has updated this tradition: a large white wind turbine had “STUART” painted in large letters down the tall tower.

We stopped at a rest area west of Des Moines, and as I looked out at a large field of corn I couldn’t help comparing the ecological characteristics of corn fields with lawns. Both crops cover large areas of North America (one source says that lawns cover more land area than any other single crop). Both crops are raised as monocultures that require huge amounts of chemical fertilizer and chemical controls for weeds and pests. Considered from the point of view of ecological science, both lawns and corn fields support a low density of species; and the “insurance hypothesis” predicts that lawns and corn fields will be relatively vulnerable to changes such as drought, invasive species, pest infestations, etc.

Above: Corn field near a rest stop west of Des Moines

As we drove by the Adair wind farm on Interstate 80, we could see a highway rest area with a tall white monument in front of it. As we passed it, we realized it wasn’t a monument at all: it was a wind turbine blade standing upright.

We decided to stop in Omaha for dinner. Carol found what sounded like a good restaurant, McFoster’s Natural Restaurant, using her smartphone. When we got there, we realized we had been at that restaurant some years earlier. At that time, the restroom walls had been covered with stickers, so Carol stuck one of her own stickers on the wall: a yellow spiral with the words “Urine Charge, Take Life Full Circle.” Alas, the restrooms had been renovated, and all the stickers were gone.

As we sat eating dinner, a couple in their early twenties walked in. The woman was saying to the man, “Yeah, I don’t know if you’ll like this place, but it’s my favorite restaurant. If you don’t like it, we can go somewhere else.” When they were out of earshot, Carol said aloud what I had been thinking: unless they were brother and sister, the man had better at least pretend that he liked that restaurant. As we were walking to our car, we saw them coming out of the restaurant; they both seemed to be in a good mood.

We had a long way to go, so we got in the car and kept driving west, into the setting sun…. 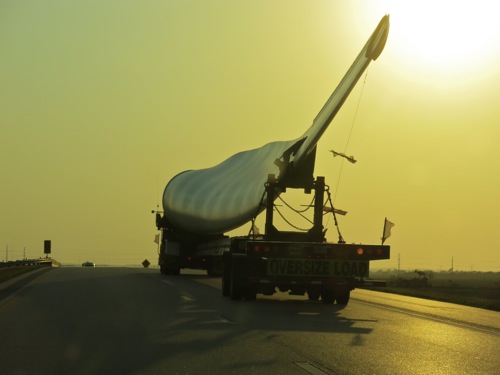 Above: Wind turbine on Interstate 80 in Nebraska 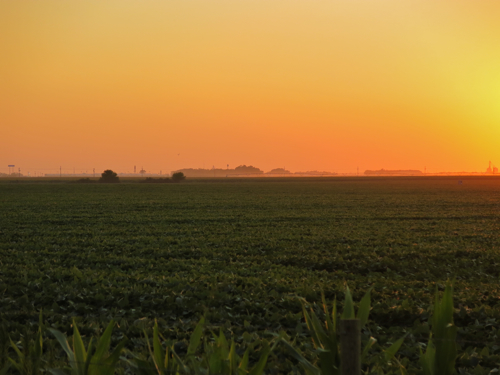 Above: Sun setting over a Nebraska soybean field