I got up at 6:30 and went to the gas station across the street from our motel to buy a newspaper. They stocked three, and I got a copy of each — the Akron Beacon Journal, the Cleveland Plain Dealer, and USA Today — and went to the Bob Evans restaurant to spend an hour eating breakfast and reading newspapers.

The lead paragraph of one of the front page articles in the Beacon Journal declared: “Amid sirens and cheers, the 77th Annual All-American Soap Box Derby kicked off its weeklong festivities with the opening ceremony Monday.” I remembered seeing a small black trailer hitched to a car in the parking lot outside our motel, with a sign that Kara’s something-or-other soapbox derby team. Sure enough, just as I was coming out from the restaurant, the car and trailer drove past me. Someone had taken white chalk and written on the side of the trailer: Honk for Luck!” I was walking so I couldn’t honk, but I silently wished Kara (whoever she may be) the best of luck in the world championships.

We left Macedonia and drove along Interstate 80 until we reached Illinois Route 53 — also known as Historic Route 66 — and headed south a dozen miles to the Midewin National Tallgrass Prairie. Midewin was established eighteen years ago on what used to be the old Joliet Arsenal. The prairie is still being restored by the National Forest Service, which maintains huge seed beds of native prairie plants, protected from deer by nine foot high fences. I stopped to look at a bed of Wild Bergamot (Monardo fistulosa) in full bloom. 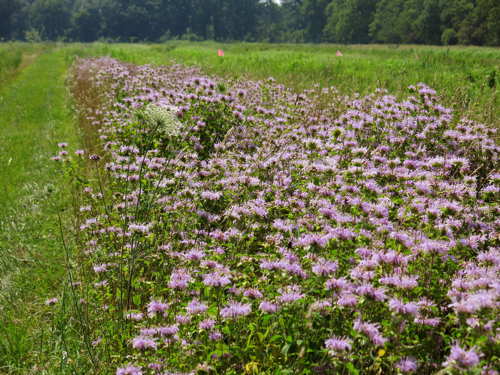 We walked along an access road lined with trees to get to the trailhead; stopping to eat some perfectly ripe mulberries. It was hot and humid, too hot to walk in the sun. We headed down Prairie Creek Trail, one of the few shaded trails at Midewin. When we emerged from the woods an hour later, the sun was partly blocked by clouds, but it was still too hot. I walked slowly, paying attention to the birds — that was my excuse for walking slowly. Carol pointed to a Ring-necked Pheasant walking along the trail behind us. A Sedge Wren called from the top of a shrub. A bright blue Indigo Bunting landed on a fence, not fifty feet from me.

Carol walked faster than I. She disappeared out of sight into the shaded access road. I stopped and turned to look out over the prairie and the woodlands. Even though I could hear the constant rumble of trucks along nearby Interstate 55, I felt as though I were far from that world. 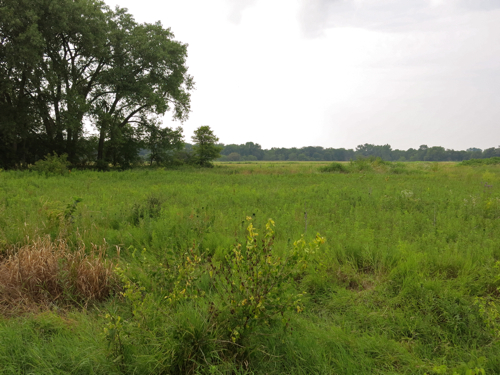 After we checked in to our motel in Joliet, we went out to eat at a little Chinese restaurant in a half-abandoned mall. That big empty mall parking lot resembled the tallgrass prairie in an eerie, slightly sinister way — the way the Fetch of Irish folklore resembles a living human being. 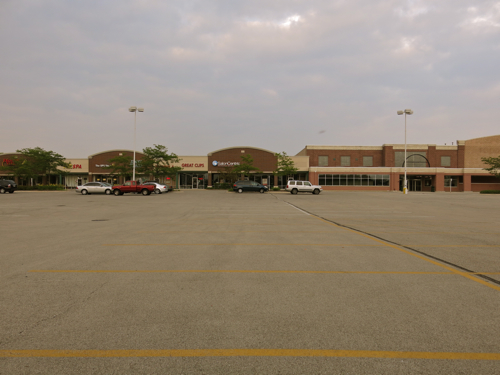 Above: Mall in Joliet, Ill.