We made a detour to Red Canyon, part of Flaming Gorge National Recreation Area. For an hour and a half, we walked through Ponderosa pine woods, stopping now and again at one of the overlooks set up to offer perfect picture postcard views of the sheer red sandstone walls of the canyon dropping a thousand feet down to the perfect emerald water of the reservoir. It is almost impossible to take a bad photograph of Red Canyon. 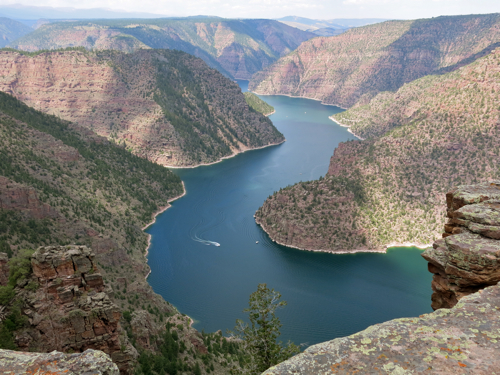 We drove back to the interstate, across broad sagebrush-covered plains, down steep, twisting roads, emerging every once in a while into valleys that were bright green with irrigated agricultural fields.

Sagebrush and mountains dominated the landscape. The interstate plunged down into Echo Canyon, historic route of the Hastings Cutoff on the California Trail. Somewhere in Echo Canyon there are the remains of stone breastworks erected by early Mormons as an act of defiance, as they prepared for an invasion by the U.S. Army; the army had spent months moving its troops westward and was camped out for the winter near Fort Bridger, Wyoming, prepared to forcibly extend the territorial rule of the United States over the Mormon theocracy. Open war was averted, barely. Eventually the coming of the railroad changed the political landscape, by making it far more difficult for the Mormon hierarchy to remain so isolated — and by making it obvious to all concerned that the U.S. Army could mobilize forces, not in a matter of months, but in a matter of days.

We stopped at a rest area in Echo Canyon, and climbed a fifty-foot high hill that was covered in sagebrush bushes ranging in height from two feet to the extraordinary height of seven feet. I looked at one of the seven-foot-high sagebrush bushes. Mark Twain was right; squinting my eyes and using my imagination, the sagebrush turned from a small bush into a huge old tree towering over me:

“If the reader can imagine a gnarled and venerable live oak-tree reduced to a little shrub two feet-high, with its rough bark, its foliage, its twisted boughs, all complete, he can picture the ‘sage-brush’ exactly. Often, on lazy afternoons in the mountains, I have lain on the ground with my face under a sage-bush, and entertained myself with fancying that the gnats among its foliage were liliputian birds, and that the ants marching and countermarching about its base were liliputian flocks and herds, and myself some vast loafer from Brobdignag waiting to catch a little citizen and eat him.” 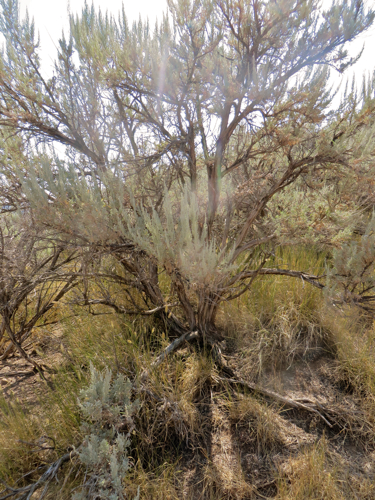 As we drove along, I compared our route on a map of the California Trail published by the National Park Service; I also looked at the official highway map of the state of Utah, which shows the historic route of the Hastings Cutoff of the California Trail, in greater detail and with more accuracy than the Park Service map. After Echo Canyon, the Hastings Cutoff went north of present-day Interstate 80. Leaving Salt Lake City, the interstate crosses a part of Great Salt Lake that is often dry, while the Hastings Cutoff followed higher ground along the base of Oquirrh Mountain, then in along the Tooele Valley, and up over Hastings Pass. The old trail passed by some fresh water springs, crossed over the present route of Interstate 80, then across great slat flats. 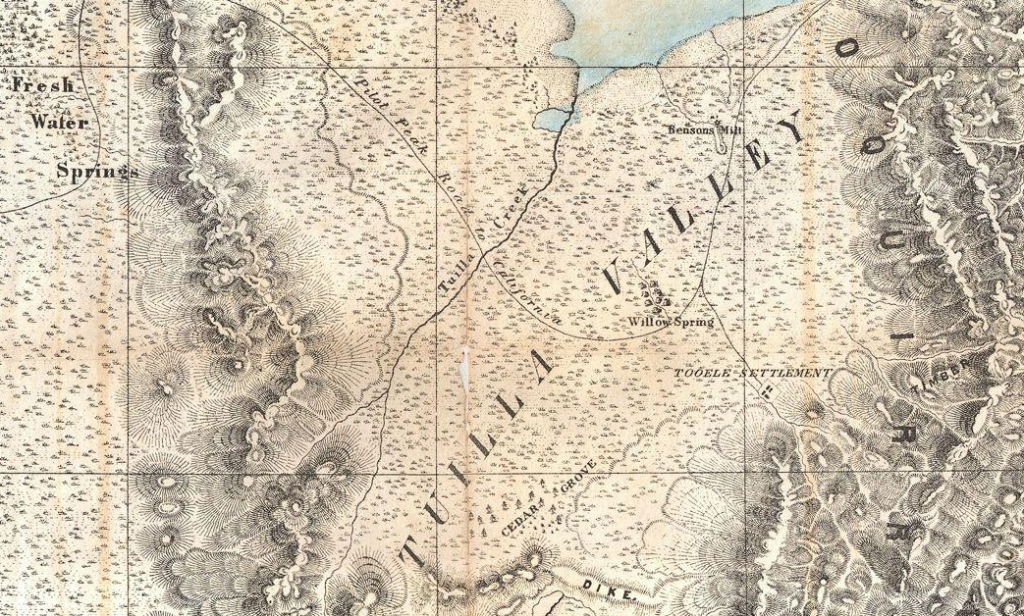 It’s hard to imagine what it must have been like to cross the utterly flat and utterly white salt flats in the days of the California Trail — neither fresh water nor forage for the oxen or humans, blinding sun above reflected by pure white salt underfoot — it seems impossible; yet people did it.

We drove at 75 miles per hour along a perfectly straight and level highway, watching the sun slowly sink towards the mountains on the Nevada side of the salt flats. We got to the rest area on the western edge of the slat flats just before sunset, and took innumerable photos of the subtly changing light in the sky, on the distant mountains, on the salt flats themselves. The beauty of the scene was tamed by the knowledge that we could get back into our automobile, and within minutes be sitting in an air conditioned restaurant in Wendover, drinking fresh water; without that sense of physical safety, the beauty would better be described as sublime and awe-inspiring.

We watched the shifting color, but we also watched the dozens of people who pulled their car or truck or RV into the rest area, and leaped out, camera or smartphone in hand, to take as many photos as we were taking. A family group came out of two rental RVs speaking Polish, children running across the slat flats, adults staring and taking photo after photo. A trucker walked swiftly to the edge of the slat flats, holding up his smartphone to take photos. And off to one side, half a dozen people took part in some kind of photo shoot: a woman in a long red dress, a girl holding a bright pink helium balloon, a photographer with a backpack and cameras slung around the neck. 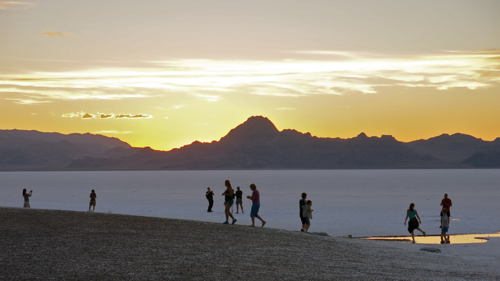