Kearney, Neb., is named after Fort Kearny, an army outpost established in 1848 to help protect the emigrants who were using the Oregon Trail in increasing numbers in the middle nineteenth century. As Interstate 80 heads west of Kearney, it roughly follows the old Oregon Trail along the Platte River, crossing and recrossing the Platte on anonymous bridges that you wouldn’t notice except for small signs identifying which channel or branch of the Platte you are driving over at 75 miles per hour. But in his 1847 book The Oregon Trail: Sketches of Prairie and Rocky-Mountain Life, Francis Parkman tells of a very different experience crossing the Platte River:

“The emigrants re-crossed the river, and we prepared to follow. First the heavy ox-wagons plunged down the bank, and dragged slowly over the sand-beds; sometimes the hoofs of the oxen were scarcely wetted by the thin sheet of water; and the next moment the river would be boiling against their sides, and eddying fiercely around the wheels. Inch by inch they receded from the shore, dwindling every moment, until at length they seemed to be floating far in the very middle of the river. A more critical experiment awaited us; for our little mule-cart was but ill-fitted for the passage of so swift a stream. We watched it with anxiety till it seemed to be a little motionless white speck in the midst of the waters; and it WAS motionless, for it had stuck fast in a quicksand. The little mules were losing their footing, the wheels were sinking deeper and deeper, and the water began to rise through the bottom and drench the goods within. All of us who had remained on the hither bank galloped to the rescue; the men jumped into the water, adding their strength to that of the mules, until by much effort the cart was extricated, and conveyed in safety across.”

We stopped at Gothenberg, Neb., to see the Pony Express station. The pleasant woman sitting in the station told us it was relocated from a ranch about thirty miles away, reassembled in the town park, a new roof put on, a brick floor put down, and concrete put between the logs to keep the weather out.

On the way out of town, we stopped at Lisa’s Kitchen for an early lunch. Lisa was outside watering the flowers in front of the restaurant, and she came in to take our order. While she cooked my hamburger, she and I got to talking. I admired the photographs of her grandchildren. There was also a framed photograph of her daughter hanging on one wall, and on the opposite wall a large framed photograph of Lisa, looking quite glamorous and scholarly, from when she lived in Hong Kong. When she heard that Carol and I live in the Bay Area, she said that her daughter lives in the Mission District in San Francisco. She and I agreed that the price of housing in the Bay Area is ridiculously high.

As we were getting in to the car, she waved at us, picked a lily, and came over and gave it to us. The blossom stayed in a large paper cup in the center console of the car for the rest of the day. 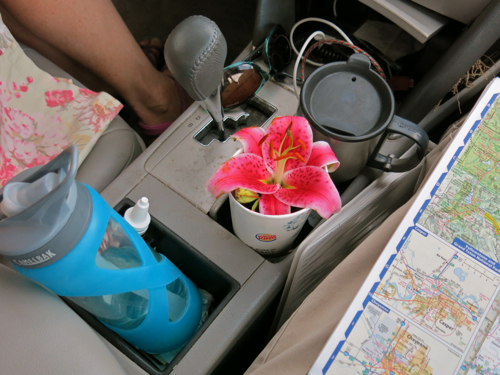 We stopped to have lunch at a rest area in Nebraska. We got out of the car, and it seemed warm and windy, but not oppressively hot — just comfortably warm. When I checked the thermometer, however, it read 99 degrees! We were back in the West, where the dry heat isn’t uncomfortable, it just sucks all the moisture out of your body until you feel faint. Carol had washed a pair of pajamas and we hung them out to dry while we were eating lunch, but they were probably dry before we had even opened the jam jar to make our sandwiches.

Before long, trees started to disappear from the landscape, and we began to see sagebrush growing alongside the highway. This was another sign that we were entering the West. The interstate climbed up the western end of Nebraska, we topped one rise and there, off in the blue distance, were the sharp peaks of the distant mountains. We crossed over the border into Wyoming, and soon saw snow-covered peaks. Mark Twain, in Roughing It, described his delight the first time he saw snow-covered peaks in the West:

“Two miles beyond South Pass City we saw for the first time that mysterious marvel which all Western untraveled boys have heard of and fully believe in, but are sure to be astounded at when they see it with their own eyes, nevertheless–banks of snow in dead summer time. We were now far up toward the sky, and knew all the time that we must presently encounter lofty summits clad in the ‘eternal snow’ which was so common place a matter of mention in books, and yet when I did see it glittering in the sun on stately domes in the distance and knew the month was August and that my coat was hanging up because it was too warm to wear it, I was full as much amazed as if I never had heard of snow in August before.”

He had spent several weary weeks in an overland stage before he saw that delightful sight; we had driven just a few days.

We stopped for dinner at a rest area in the Wagonhound region of Wyoming. A sign proclaimed that Indians had used the same spot for a rest area:

“The stone circles or ‘TIPI RINGS’ at this site mark the location of a prehistoric Native American campsite. The stones were probably used to anchor the skins of conical tents, known by the Sioux word ‘TIPI’…. It has been estimated that there are over 1 million tipi rings in the western United States. As such, they are one of the most common archaeological features to be found in this part of the country.”

Certainly, those prehistoric Native people picked a beautiful spot to set up their tipi. 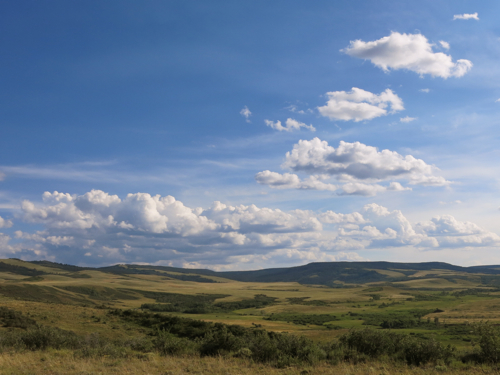 Above: The Wagonhound region of Wyoming

Sagebrush, snow-covered mountains, Indians — one more thing was needed for us to know that we were truly in the West: evidence of major resource extraction. But soon we saw a huge refinery alongside the interstate, out in the middle of nowhere: 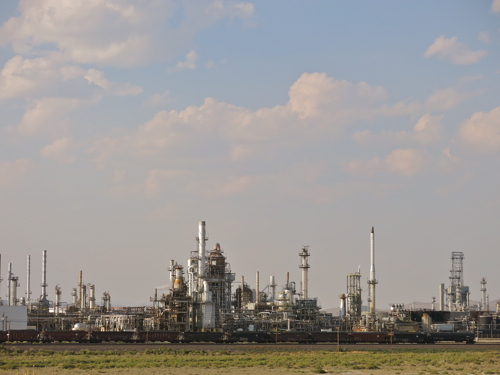 Above: Refinery near Sinclair, Wyo.

Then we passed an open pit mine that stretched for over two miles: huge piles of dirt with huge earthmoving equipment crawling over them; the top of a crane emerging from a some deep hole not far from the highway. Now we were truly in the West.