We left Stow, Massachusetts, at nine o’clock this morning. Stow lies on the edge of the coastal plain of southeastern New England, and we drove west through the hills of central New England, into the Berkshire Mountains, through the Taconic Mountains of New York, up the Mohawk River valley through the dramatic gap between the foothills of the Adirondack Mountains to the north and the Catskills to the south. I said goodbye to the last little foothills along the freeway. 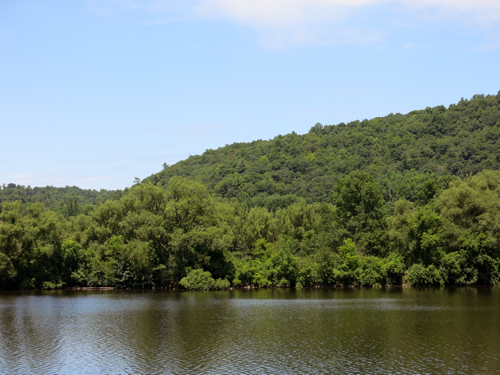 Above: The Mohawk River along Interstate 90, looking north towards the last of the Adirondack foothills.

We will see no more mountains — nothing but plains and rolling land — until we reach Wyoming, some 1,500 miles from here. We stopped at a rest area near Waterloo, New York, and already the landscape began to look like the Midwest or the Great Plains: a big field of legumes, a line of trees in the distance, some farm buildings, and a big outlet mall on the other side of the interstate. 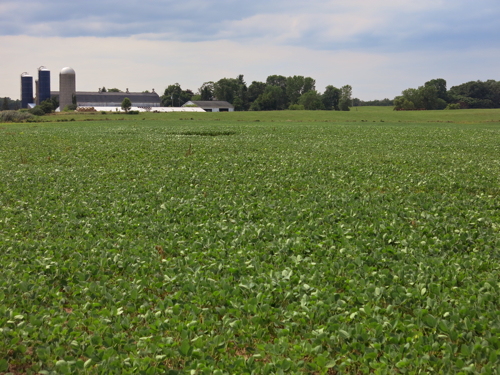 Above: Farm off Nine Foot Road, near Waterloo, N.Y.

When we got to Fredonia, N.Y., where we will spend the night, we took a long walk from our hotel to the campus of SUNY Fredonia. Although the university was founded in 1829, it obviously saw a big building boom beginning in the 1960s, when lots of big bland institutional brick buildings got built. I imagine it can look pretty bleak in the long gray winters, but everything was beautifully green today.

Fredonia obviously has a big student population. Lots of the attractive older houses in the center of town have been split up into student apartments, and we saw lots of evidence that this is a university town: a peace sign in a window, a poster proclaiming allegiance to Bob Marley, and a lovely garden with a handpainted sign that read “GROW FOOD NOT LAWNS.” 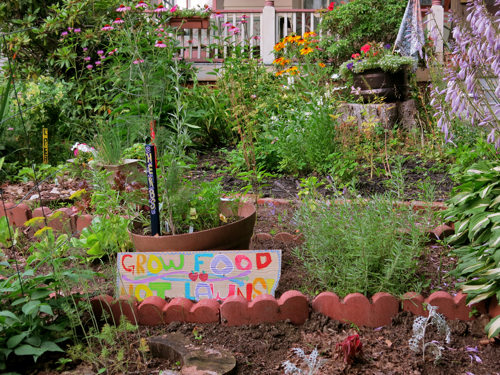 Above: Garden in Fredonia, N.Y.