The Association of Statisticians of American Religious Bodies (ASARB) has produced some interesting maps on the geographic distribution of various religious groups, as of 2010. You can search for specific religious groups, including the Unitarian Universalist Association (UUA). For the UUA, you can pull up the following types of maps: adherent change, adherent quintile, cartogram, locations, location change, penetration, etc.

I also found county-by-county data in CSV format, which I dumped into a spreadsheet, and played around with. Here’s some numbers for you to think about: Just 5 U.S. counties show a population penetration of between 1.0% and 4.99%: Nantucket County in Massachusetts (1.97%); Jefferson County in Washington (1.45%); Charlottesville County in Virginia (1.37%); Los Alamos County in New Mexico (1.19%); and Windsor County in Vermont (1.15%).

Click on the low-resolution map below (showing population penetration) to go to the ASRAB Web page where you can get high-resolution maps and other data: 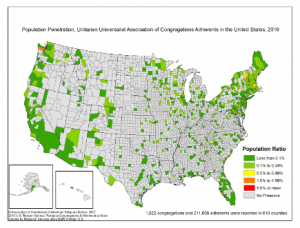 Or read on for a few more facts and figures about Unitarian Universalism that I got from the ASRAB Web site:

(3) The U.S. county with the highest number of adherents (11,075), and the largest number of congregations (33), is Middlesex County in Massachusetts. This is where I grew up, which is probably why I think of Unitarian Universalism as a mainstream religion.

6 thoughts on “Where we are, where we’re not”