We left San Mateo in the middle of the morning, drove down through San Jose and Gilroy, and up over Pacheco Pass into the Central Valley. There’s a grayish-brown cast to the landscape of the Central Valley, and everything looks dry and dead — except where the land has been irrigated for crops. 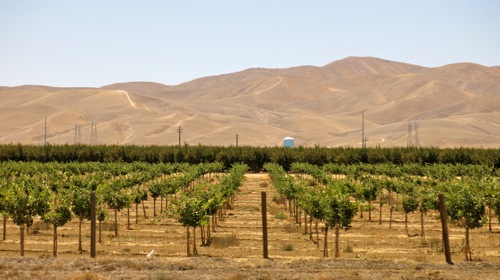 Above: Interstate 5, near Lost Hills, Calif.

We’re now in the third year of a severe drought across California. In a few places, acres of trees had been uprooted and left to die, perhaps because they use too much water. On the fences surrounding many agricultural fields were signs protesting any possible reduction in water allotments to agribusiness and farming interests: “No Water = No Jobs,” “Stop the Congress-created Dust Bowl,” etc.

We turned east onto Route 58 through Bakersfield, climbed over the mountains at Tehachapi, heading towards the Mojave Desert. “There’s a Joshua Tree!” I said to Carol, pointing out the car window. The sometimes contorted shapes of Joshua Trees, their arm-like branches, make them seem like beings that are about to move, to turn and point at you.

On a map, it looks like there isn’t much in the desert, but it is far from empty. There’s the highway; there are mysterious industrial plants in the middle of the desert; there are power transmission lines everywhere; there is Edwards Air Force, with its planes, and strange structures on the tops of high mountains; there’s the historic Southern Pacific rail line, now owned by BNSF, with several mile-long freight trains per hour; and there are the Joshua Trees. 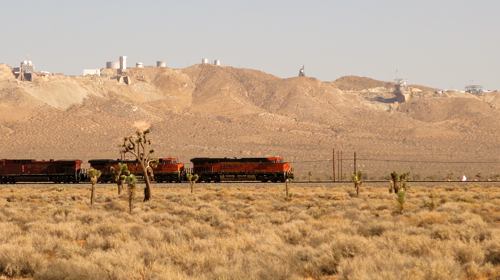 Above: Near Boron, California

In Barstow, we stopped at the Canton Diner for dinner. Carol asked our white waitress if she could get just plain vegetables. The waitress went and got a middle-aged Chinese man from the front desk. Carol explained that she wanted just some plain stir-fried vegetables. He disappeared, and came back in a moment with some uncooked Chinese broccoli, and something that looked like amaranth, to show to her. She choose the Chinese broccoli. “Any meat?” he asked. “No, thank you,” she said apologetically, “I just want some vegetables.” “A little garlic?” he asked. “Sure,” she said. When the plate of stir-fired Chinese broccoli came, it was as good as anything you might get in San Francisco’s Chinatown.

When the man brought us the check, I asked him if he were from Hong Kong. “Yes,” he said, looking a little surprised, “why do you ask?” “You have just a little bit of an English accent,” I said; and he was old enough to have completed his education while Hong Kong was still a British possession. He smiled, and when we walked out, he bid us a pleasant good-bye. 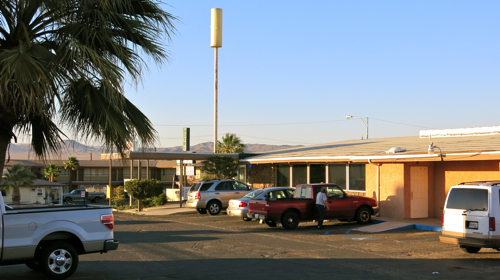 East of Barstow, the landscape grew emptier, though the rail road was still nearby, transmission lines crisscrossed the landscape, and there were still mysterious-looking plants here and there in the distance. The setting sun turned the landscape a warm glowing red. 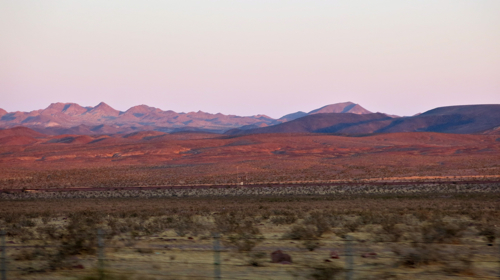 Above: Along Interstate 40 east of Newberry Springs, Calif.

We pulled in to Needles at 9:20; it had gotten up to 108 in the middle of the day, and the temperature was still in the mid-90s. The first time I came to Needles, I had just read a biography of Charles Schulz, the cartoonist. He had spent three years of his childhood in Needles, and hated it. It was cold during the winter, so cold he could hear rocks cracking; and during the long summer it was brutally hot, sometimes not getting below 90 at night. But I liked Needles: I liked the small-town feel, I liked the newspaper that’s been continuously published since 1888, I liked the stark desert landscape surrounding the town. I liked it enough that I keep coming back.

The only reason Needles existed when Charles Schulz lived here as a boy was because of the railroad. It’s still a railroad town, and it’s still a small town, with fewer than 5,000 residents. Carol and I took a walk down to the Amtrak depot. A man was standing on his front porch, and we said hi. “Nice and warm,” I said to him. “It’s a lot cooler now than it was,” he said, and we both chuckled. If it weren’t for the climate, it might be a nice place to live.