Today was the first day of Peace Camp at the San Jose UU Church. One of the things we did today was to play non-competitive games (of course). All kids who live here on the Peninsula seem to know a game they call Chaos Tag. This quickly became the favorite Peace Camp game. It’s fast, frenetic, it takes skill to play well but it can be played with pleasure by mixed age groups, from 5 to adults — a perfect game for a peace camp. 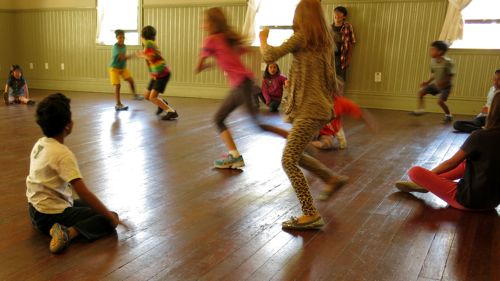 I’m interested in the fact that this game is such a big part of of kids’ folklore here on the Peninsula. Every kid I’ve met from San Jose to Atherton seems to know and and love this game, and they’ll play for hours. (However, when I worked at the Berkeley UU church a decade ago, I don’t remember kids ever playing Chaos Tag; and one of the young adults on Peace Camp staff who grew up in the East Bay knew the game with slightly different rules under the name “Everybody’s It.”) I’m fascinated with the way this non-competitive game has sunk so deeply into Peninsula kids’ culture — how much they enjoy it, how hard and how long they play.

Sometimes education is a matter of finding out that the kids are already doing the right thing, and then telling them to do more of it.

(Note on the photo above: We do have media releases for the kids in Peace Camp, but nevertheless I deliberately blurred facial features in the photo above to preserve anonymity.)