A little before ten this morning, Carol dropped me off at Big Creek Primitive Baptist Church in Alpharetta, Georgia. The church has been engulfed by upscale suburban sprawl — office parks, gated communities, tasteful shopping malls, impeccably maintained four-lane roads — but once you get on the church grounds, you enter into a different cultural landscape. The church, a plain and attractive brick building, is surrounded on two sides by moss-covered gravel parking areas shaded by trees; quite a few cars were already nestled in shady parking spots. Behind the church was a cemetery with quite a few older gravestones, and some gravestones that looked very new. 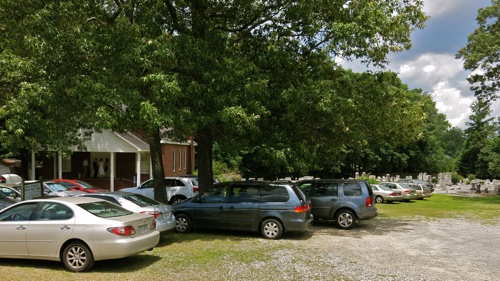 Inside, the church was quite plain, as you’d expect in a Primitive Baptist Church: little ornamentation, plain white walls, simple but attractive pews — and no musical instruments. Fifty or so singers were gathered up at the front of the church. I went to sit in the bass section, and noticed that in the hymnal racks on the backs of the pews were hymnals, Bibles, and fans in case it got too hot. I opened up my copy of The Sacred Harp, and got ready to sing.

The singing, the 146th session of the annual Union Musical Sacred Harp Singing Convention, belonged to this other cultural landscape, removed from the gated communities and office parks. It’s music that’s meant to be performed and shared, not consumed; it’s a democratic musical tradition where everyone sings, and anyone can lead a tune if they want to. The singing rose up into that plain white sun-washed church, loud and triumphant. It had that old-time lonesome sound that lets you know that in spite of all the sorrow and troubles we face, God is in heaven and all is right with the world. 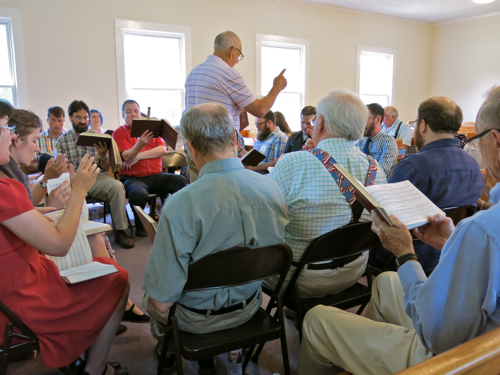 Above: View from the bass section, 146th session of the Union Musical Sacred Harp Singing Convention

A seven year old girl got up to lead “Africa,” an old Isaac Watts hymn — a hymn seems to me to express a Universalist theology of hope and assurance — set to music by William Billings in the late eighteenth century. Between the words to the hymn and that self-possessed girl leading the other singers so well, I got a little choked up and couldn’t sing for a bit, and maybe there were some tears running down my cheeks.

Lunch was served in the time-honored custom of dinner-on-the-grounds. There was a small kitchen building behind the church. Extending from that was a long table, perhaps fifty feet long, built on concrete blocks. Everyone who had brought food to share laid it out on this long table. Over the table was a roof to keep the sun and rain showers off, and between the posts holding up the roof were boards set at a height where you could put your plate while you stood and ate and talked with everyone around you. The woods stood near at hand, and some people from the church instructed us to through any food that was left on our plates out to the varmints in the woods.

Carol had come to the singing by now, and we got our dinners: ham, pulled pork, collard greens, fried okra, perfectly ripe cantaloupe, broccoli casserole, and some of the best layer cake I’ve ever eaten. We stood and ate and talked. I talked with Henry from Alabama, with whom I talked universalist theology. I talked with Nathan, an art historian who’s moving to North Dakota, who specializes in spiritual painters in the southwestern U.S. in the early 20th century. We talked with Shawn and Natalie, who live in Melbourne, Australia, and who sing Sacred harp there. I can’t remember who all we talked with.

The singing was just as good in the afternoon session, if not a little better. During the afternoon break, I got involved in a brief and somewhat technical discussion with a couple of fourth- or fifth- or maybe sixth-generation Sacred Harp singers on the proper tempo for “David’s Lamentation,” a William Billings composition. The piece has become a standard in the repertoire of college choirs, where it is often sung at a slow tempo, and apparently some people have tried leading it slowly at Sacred Harp singings. But the three of us all agreed it should be led at a fast pace (not that my opinion counts), which is both the traditional way to sing it in the South (and not coincidentally, the way Billings clearly preferred it to be sung).