A wild thunderstorm blew through Amarillo in the middle of the night: thunder rolling and booming across the sky, flashes of lightning coming through the motel’s blackout blinds, rain lashing at the window. I got up and closed the window so the rain wouldn’t soak the floor; then I stood there for a minute or so and looked out at the storm. We rarely have thunderstorms in the Bay area, and never on a scale like the thunderstorms on the Great Plains.

I slept late — I’m still on California time, I guess — and fortunately by the time I had taken my shower the motel was no longer serving breakfast. Breakfasts at budget motels, with their limp gray sausage patties, and scrambled egg product that comes in a plastic bag that the motel staff sticks in a microwave to heat up, are well worth sleeping through.

As we drove across Oklahoma, I noticed how green everything looked. The last time we drove across Interstate 40, at about this time of year, Oklahoma had been in the grip of a lengthy and severe drought, and the landscape looked silvery-brown from lack of moisture. This year, though, there has been enough rain to turn the fields bright green. I’d read a chapter from Agatha Christie’s Murder at Hazelmoor to Carol, then look out the car windows at the miraculously green landscape.

By the time we reached Oklahoma City, we were ready for a longer stop. We found our way to Bricktown, the self-proclaimed arts and entertainment district. The weather was hot and sticky — not at all the dry heat we’re used to from having lived in the West for five years — and we were glad to walk along the Bricktown Canal where it seemed a little bit cooler.

We left the pathway along the canal to tour around a city block or two, just to see what was there, and we saw a sign saying: “American Banjo Museum Entrance,” with an arrow pointing around a corner. “We have to go see this museum,” I said. Carol was willing to go. A polite older man took our admission fees. “You can tell this is a real banjo museum when the man at the front desk has a banjo case beside him,” I said. The man smiled and asked me if I played, but I said I only played a little guitar.

I liked the older banjos best, particularly a William Boucher banjo from the 1840s, with a lovely scroll pedhead, and a Bullock Fretless banjo from 1854. 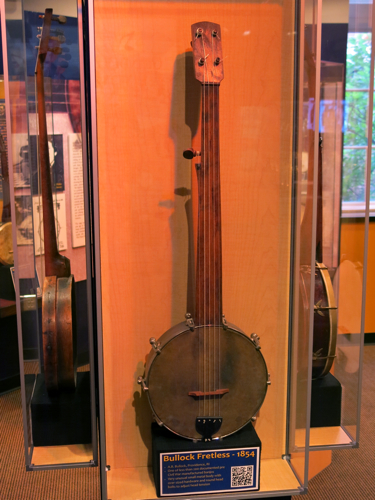 Most of the banjos were pretty fancy, with complicated inlays on the fingerboard, ornate carving on the neck, elaborate designs painted on the back (i.e., on the resonator head), oddly-shaped banjos, etc. These are the sorts of banjos that appeal to collectors, but they didn’t really appeal to me. 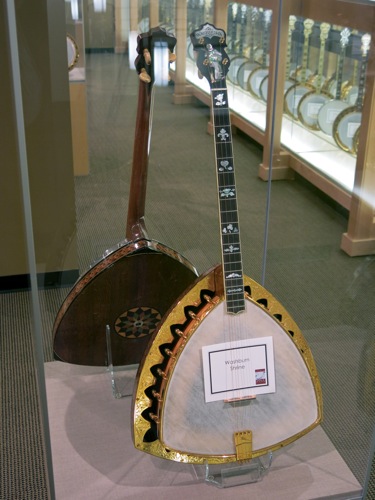 I was much more interested in the banjo owned by John Stewart of the Kingston Trio: a “Pete Seeger” model banjo produced by Vega, and played by Stweart during his Kingston Trio years — a working banjo, rather than a show banjo.

But the most interesting rooms what was apparently a repair room. The door was locked, but you look see though a window. There were two tables, the further table stacked up with banjo parts and tools and what might have been glue; on the near table was a banjo that had been disassembled into its component parts: neck assembly, pot, resonator, head, etc. 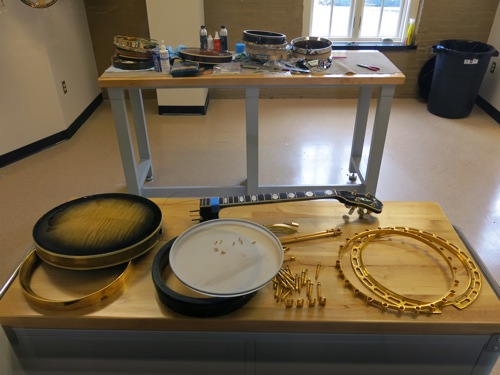 We spent too much time in the American Banjo Museum. As a result, it was almost 10:30 by the time we checked into our motel.