Before we left Russellville, Carol wanted to stop in and check out Jim and Ed’s Old House, which was a sort of cross between an antique store and a thrift store down the street from the motel. One of the proprietors — I never did learn whether it was Jim or Ed — greeted us cheerfully and told us to look around, and to be sure to ask him if we had any questions.

After we looked around a bit, he remarked on my height: “You’re taller than I am,” he said. “How tall are you?” said Carol. She had to repeat her question a couple of times before he could hear her. “Six one,” he said. Carol pointed to me, said, “Six five,” and held up six fingers, then five fingers. He smiled and nodded. I said my height came from my German roots, and asked him if he had any German in him. “No,” he said, “no German in me. But I’m part Indian.” “Which tribe?” I said. “Cherokee,” he said, as if there were no other possibility. “And they’re tall?” I said. “Oh yes,” he said.

He showed us around the house, and told us how they were going to pull down this wall, remove the kitchen, and greatly expand the space they had to show their merchandise. Carol finally bought a little pitcher in the shape of sweet corn. But we kept right on talking, and it took about ten minutes to say good bye, and another five to actually get out the door.

We ate lunch at the Panda Buffet in Lonoke, Arkansas. Carol went into a thrift shop while I walked around town. The malls along the interstate have sucked much of the life out of the old downtown, but the county courthouse and its attendant law offices mean that there are enough people to support a few restaurants and small businesses, a used book store, and even a storefront church. I was disappointed that the used book store had closed for the day. But then I came across a Tudor Revival wood frame church building, a once beautiful building now in sad disrepair. It stood a block from the old depot building, nicely sited on the corner of Second and Depot streets, a building with a definite character and personality. 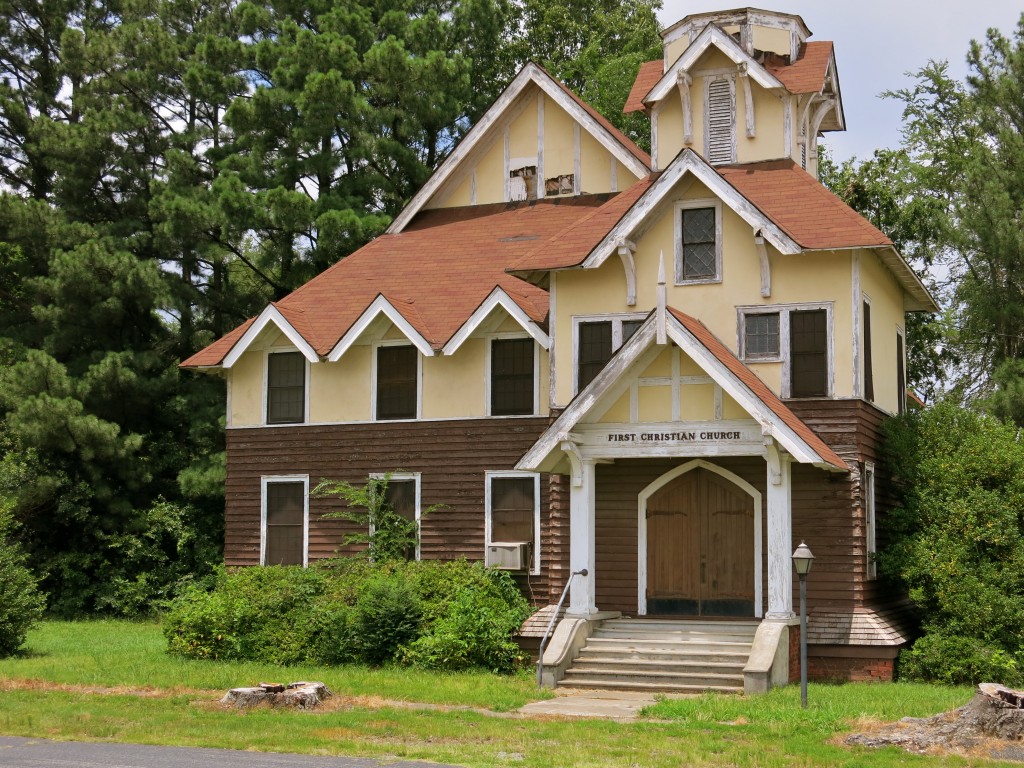 (A little research on the Web tonight reveals that the building is listed on the National Register of Historic Places, and that it even has its own Facebook page.)

I couldn’t help comparing First Christian Church to the storefront church a block or two away. Storefront churches avoid the expense and hassle of maintaining their own building, but there is no beauty or character in their architecture.

As we drove through Mississippi, I was amazed by how incredibly green everything was. And how wet everything was — the air was humid, we hit little rainshowers throughout the day, and in some of the fields there was even standing water. California never feels this green, or this wet, not even in the depths of the winter rainy season. 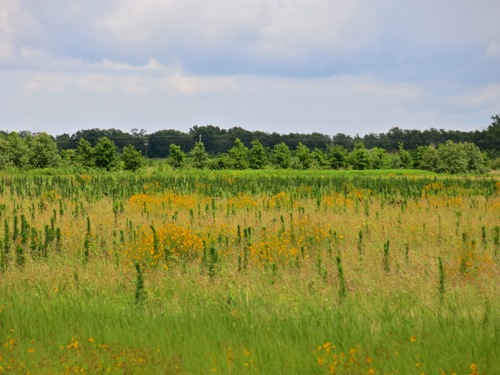 We stopped for coffee in Potts Camp, Mississippi, and wound up at Flick’s Country Restaurant. Carol got to talking to a couple of older white men at the table next to ours. One of them left not long after we sat down, but the other stayed and talked with us for some time. He had been a pilot in the military, flying MD-11s, and also had a private pilot license, although, as he said, “The doctors don’t let me fly any more.”

He asked where we had come from, and we told him, and he wondered what brought us to the South. Carol said we were visiting a cousin of hers in Montgomery. I asked him if he had ever heard of Sacred Harp singing. “Oh, yes,” he said, “my grandparents used to have a singing [I think he said at their church]. People used to come from a hundred fifty, two hundred miles around to sing.” I told him I was going to a Sacred Harp singing in Alpharetta, Georgia.

He told us about Flick’s Country Restaurant, and nodded at the next table over, where an elderly man sat with three other people. “That’s old Mr. Flick himself,” he said. “No longer runs the restaurant, but there’s his picture there on the wall.” The photograph he pointed out was clearly of the same man, perhaps forty years younger, with a hair style from the early 1960s.

We said we had better get on the road again; we had to make it to Montgomery tonight. “You’d better start driving,” he said, and shook both our hands before we set off.