In our middle school ecojustice class, one of the things we’re doing is experimenting with alternative low-cost, low-impact cooking methods, such as a solar oven made out of cardboard. Now we’re experimenting with rocket stoves, designed originally by Dr. Larry Winiarski and colleagues at the Aprovecho Research Center. Rocket stoves use biomass to cook, but are much more efficient than traditional cooking fires, and because they’re more efficient produce fewer pollutants such as smoke and harmful gasses. Not really something we need in the first world, except in disaster situations, but a huge advance for the developing world.

Last week in class, we put together a simple brick rocket stove but couldn’t get it to light. So I spent some time this week building and using a simple rocket stove made of 16 bricks. This stove is based on Larry Winiarski’s 16 brick stove, but instead of using adobe bricks I used clay bricks commonly available at masonry supply houses and building supply centers. Specifically, I used nominal fifteen 8 x 2-1/4 x 4 inch clay bricks, and one 8 x 1 x 4 inch clay brick, as shown in the sketch below: 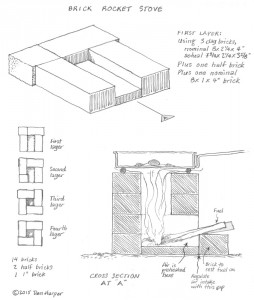 For fuel, I split an 18 inch long 2 x 10 into finger-sized pieces. To light the stove, I balled up a piece of paper and dropped it down the center hole, dropped some shavings, small scraps of wood, and slightly larger scraps of wood on top, then dropped a lighted match in. When the fire was burning well, I began feeding 3 to 4 pieces of fuel in from the bottom, adjusting the air intake gap as needed to get a hot flame.

The rocket stove needs you to pay attention to it. The fuel burns pretty quickly, and you have to keep pushing it into the combustion chamber, adding new fuel as needed. Once the fire was going strong — which took seven or eight minutes — I got ready to cook. 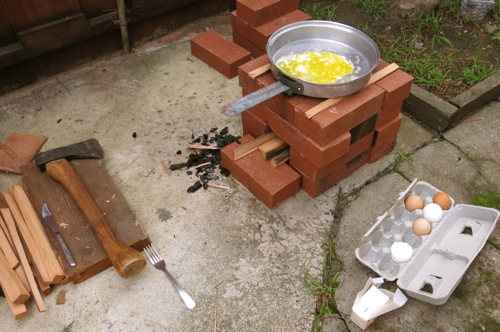 Since I couldn’t find any metal of the right diameter, I rested the frying pan on two pieces of wood, trying to get the flames and hot gasses to spread out across the entire bottom of the pan. The fire wasn’t quite hot enough, so I put in another stick of fuel, and soon the butter was sizzling, and even turning brown. I pulled the pan off the fire, broke an egg into it, then scrambled the egg. The heat was just right for scrambling an egg, and the pan heated fairly evenly.

By the time I ate my scrambled eggs, the fire had died down quite a bit. I pulled out the big pieces of fuel, and doused their burning ends in a can of water. Then I raked the live coals out (obviously, I didn’t want to pour water directly on the bricks, which could crack them), and poured a little water on them. 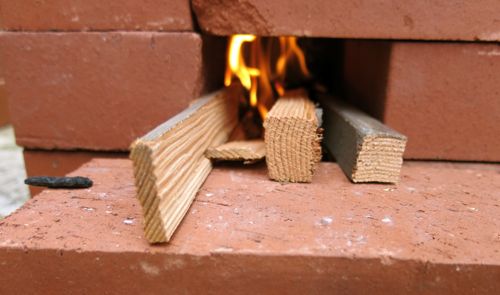 Above: A view of the fuel, and the combustion chamber beyond.

One final note: the best way to make half bricks is using a brick chisel: 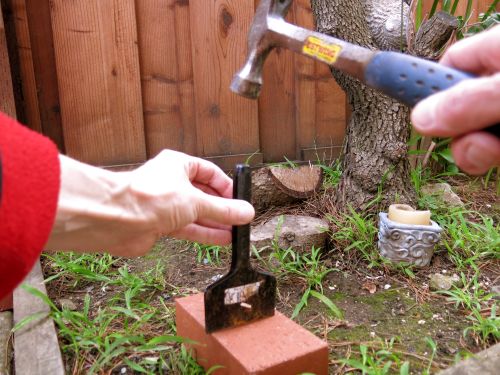 Update, one year on: In practice, this stove was not particularly effective. The bricks take a long time to heat up, and until they are warm, the stove does not burn well. Also, the chimney is not quite tall enough for the most efficient combustion. This stove needs additional design work in order to be really practical. In the mean time, a concrete block rocket stove is cheaper, just as easy to make, and works better.