Yesterday in Sunday school, two groups of kids started making solar ovens. While they were working, we had solar s’mores cooking in the solar oven I made on Saturday. However, it took a long time for the solar s’mores to cook. First problem: the morning clouds didn’t begin to clear until halfway through Sunday school. Second problem: thin clouds persisted most of the morning, and even the thinnest of clouds caused the temperature to drop at least ten degrees inside the oven. We started cooking the s’mores at about 10:00, and they weren’t really done until just before noon — after most of the kids had already gone home.

The clouds finally cleared away completely, and I left the solar oven outside my office for several hours in the early afternoon. The inside temperature rose to over 200 degrees Fahrenheit (200 degrees is as high as the meat thermometer goes), with outside air temperature in the high 70s. I heated up a mug of water, to over 170 degrees, and made a nice cup of tea. While I was making tea, Fred Z., from the Green Sanctuary Committee, stopped by and suggested trying cast iron cookware in the oven — it’s dark and absorbs heat well, plus it provides a good thermal mass to even out cooking temperature.

So this morning I dug out a small cast iron frying pan, and decided to try cooking a fried egg in the solar oven. The air temperature was about 65 degrees, but in spite of clear skies I couldn’t get the inside temperature over 190 degrees — which suggests I need better insulation in the oven. I cooked a fried egg, over easy: 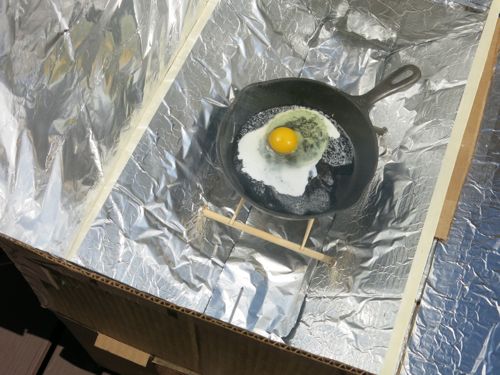 It took about twenty minutes, and was really more of an egg baked in butter than it was a fried egg (it tasted good, though); obviously there is a lot more to be done to improve the efficiency of the oven.

One thought on “Adventures in solar cooking”