Carol and I drove over to Half Moon Bay late this afternoon to watch the sun set into the Pacific Ocean for the last time this year. 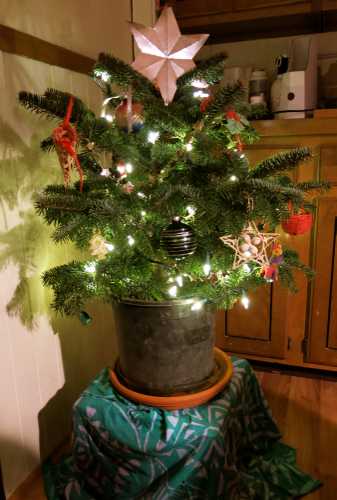 Yes, we do have a lobster ornament on our Christmas tree.

Jenni suggested the Ferry Building in San Francisco, so that’s where Ray, Tara, and I met her a little after three this afternoon. Both our tenors were ill, but we figured no one would notice that both Ray and I were singing bass. We started out just inside the main entrance, but between the traffic along Embarcadero and the crowds in the building, it was too noisy. So we went down to the south entrance, and set up there. “What should we start with?” “Deck the Hall, page 11.” Jenni counted us in, and we began to sing.

Once we got in the groove of singing, I could relax a little and look at the people who were listening to us. Everyone was smiling. Except two small children, who stood listenly raptly, their mouths slightly open. We decided to take a break, and the woman who was with the two children thanked us. “My kids are just enthralled,” she said. “Oh, then we’ll sing something else for you,” said Jenni. The kids wanted to hear “Frosty the Snowman,” but we didn’t have the music for it, so we settled on “Jingle Bells.”

Later we sang at the north end of the Ferry Building, and people had the same reactions: the adults all smiled, and the children just stood and listened. We all hear a lot of Christmas music in December — the endless Christmas carols played as background music in stores, the songs you hear on the radio — but it’s much better when you hear live music, even when it’s performed by people who are not professional musicians. Live music is not neatly packaged by corporate bean counters; it is not controlled by the touch of your finger on a touch screen; it is not performed in some acoustically perfect recording studio somewhere. Unlike recorded music, it is imperfect and alive and a little bit wild.

We sang until we got tired. We sang several of the carols several times over, but they never got boring, because people were smiling, and one little girl started dancing. Finally we had to stop singing. We were all smiling, too.

The middle school ecojustice Sunday school class got approval from the Board for installing a rain barrel at church. Last night, Buzz and I rushed to put a downspout from one of the roof drains into the rain barrel, in anticipation of today’s storm. It looks like our rushing was worth it: we’ve had over two and a half inches of rain since then.

I just took a little walk around our neighborhood. San Mateo Creek was filled with rushing brown water, but the water level is still ten to fifteen feet below the tops of the banks. The ground is pretty well saturated, and I could see puddles everywhere. But the storm drains are still working and the streets aren’t flooded around here. And I can see jetliners flying through the low clouds towards the airport, so it looks like SFO is open. 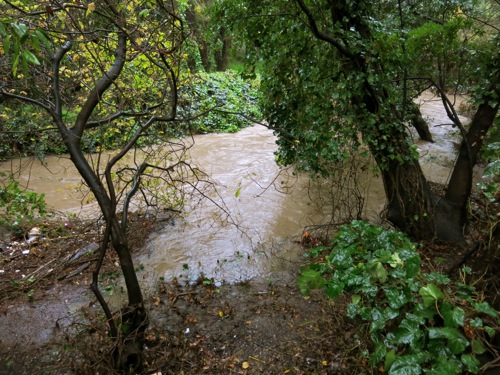 Above: San Mateo Creek at about 3:45 today, from the Delaware St. bridge. Those trees on the right are usually well out of the water.

But according the Twitter, other places around the Bay area are experiencing flooding. For example, Highway 101 south of San Francisco is flooded in places, and traffic is just a mess. I feel lucky that I was scheduled to work at home today.

Mr. Elphinston talked of a new book that was much admired, and asked Dr. Johnson if he had read it. JOHNSON. ‘I have looked into it.’ ‘What, (said Elphinston,) have you not read it through? Johnson, offended at being so pressed, and so obliged to own his cursory mode of reading, answered tartly, ‘No, Sir, do you read books through?’