I’m writing lesson plans and teacher resources for a curriculum for upper elementary grades on Greek myths. The core material in the curriculum was developed with Tessa Swartz, a middle school student who had taken classes with me where I piloted some of the preliminary material. Tessa proved to be a valuable collaborator, especially given her sensitivity to the essentially alien nature of Greek myths, and her willingness to go beyond the common trite interpretations of many of these myths. As we developed the core material of the curriculum, both of us got interested in the figure of Medusa. Here’s an excerpt from this new curriculum, a teacher resource on Medusa: 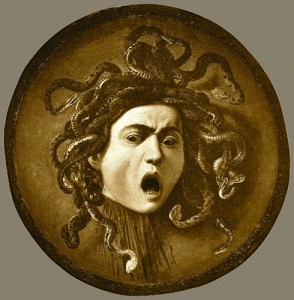 When we chose stories for this course, both of us placed the Medusa story at the top of our lists. What makes Medusa such a fascinating figure? The face of Medusa contains great power: the power to freeze others into stone. On the other hand, we considered Medusa’s killer, Perseus, to be little better than a bully, a strong-arm man who coerces others into doing what he wants through violence or the threat of violence. So the story of Medusa can lead to interesting explorations of power, and the use of power.

The poet Robert Graves felt that there was a factual origin of the stories about Medusa. Originally, Graves said, the face of Medusa had a religious purpose: it was “an ugly mask assumed by the priestesses on ceremonial occasions to frighten away trespassers; at the same time they made hissing noises, which accounts for Medusa’s snake locks. There never was a real Gorgon; there was only a prophylactic ugly face formalized into a mask.” (1) Thus in Graves’s view, Medusa is not evil; rather Medusa originated as a means to maintain the sanctity of religious rituals.

By the 1970s and 1980s, some feminist thinkers also claimed Medusa that Medusa was not evil. For example, in 1986 Emily Erwin Culpepper claimed Medusa’s face as a positive image. In a powerful essay, Culpepper tells how she fought off a would-be rapist who attacked her in her own home, contorting her face and screaming at her attacker. Here is how she described the attack in a journal entry an hour after it happened:

“I am staring him out, pushing with my eyes too. My face is bursting, contorting with terrible teeth, flaming breath, erupting into ridges and contours of rage, hair hissing. It is over in a flash. I still see his eyes, stunned, wide and staring almost quizzically, at me, looking oddly puzzled, as if I am acting strange, as if I were acting wrong!”

Later, after the police had come and gone and she was alone again, she looked at herself in the mirror as she made that face of rage. She said:

“As I felt my face twist again into the fighting frenzy, I turned to the mirror and looked. What I saw in the mirror is a Gorgon, a Medusa, if ever there was one. This face was my own and yet I knew I had seen it before and I knew the name to utter. ‘Gorgon! Gorgon!’ reverberated in my mind. I knew then why the attacker had become so suddenly petrified. And knew with a great shuddering relief that I would win the fight against self-blame….” (2)

According to the scholar David Leeming, it wasn’t just straight white women who claimed Medusa as their own; GLBTQ persons and people of color also found value in Medusa. As an example, Leeming cites a one-woman play titled “Medusa” performed by Dorothea Smartt in 1993 in London. (3) In an interview, Smartt said:

“I thought to myself: Medusa was probably some black woman with nappy hair, and some white man saw her and cried: a monster!, and feared her, and so told stories about her dangerous potential. To see her more clearly, I studied anthropology and thought about the first encounters of white men in Africa, and how they might have viewed and feared these strange and fantastic creatures: black women. What did early explorers see or think they saw?” (4)

Whether or not Dorothea Smartt’s interpretation of Medusa is historically accurate, the important point is that today we can see Medusa as a figure of power from the past who can help us understand who we are today. In 1971, the Unitarian Universalist poet May Sarton wrote a poem titled “The Muse as Medusa,” in which she explores the power of Medusa as a source of inspiration:

I saw you once, Medusa; we were alone.
I looked you straight in the cold eye, cold.
I was not punished, was not turned to stone.
How to believe the legends I am told? …

I turned your face around! It is my face.
That frozen rage is what I must explore —
Oh secret, self-enclosed, and ravaged place!
That is the gift I thank Medusa for. (5)

The figure of Medusa helps May Sarton understand of her own inner being, her own soul. Somewhere in Sarton’s soul, she senses rage, a “secret, self-enclosed, and ravaged place,” and she realizes she must explore that rage, learn more about her inner self. Medusa helps May Sarton with one of the key tasks of a religious liberal: to know thyself.

All of the above helps explain why we were initially attracted to Medusa. Although she is a product of ancient Greek religions, she contains eternal human truths: she can help us understand the power of rage to protect ourselves; she can help us begin to understand how people who look different from us may see us as monstrous when we see ourselves as good and powerful; she can help us

Now, what about the hero Perseus:

Many people see Perseus as the hero of the story: he is the one who conquers and kills Medusa, he is the one who overcomes Atlas. But we didn’t feel Perseus was a hero, so much as we felt that Perseus was a bully who wassn’t even very bright. As it turns out, our feeling about Perseus was anticipated by Pelaephatus, an ancient Greek writer. Pelaephatus was a religious naturalist — that is, he did not believe in supernatural explanations for religious matters. As a religious naturalist, Pelaephatus could not believe that Medusa’s head actually turned people to stone. Instead, he explained the story as follows:

“When he got his hands on the Gorgon, Perseus cut it in pieces; then, by way of fitting out his trireme, he put the head of the Gorgon on it and thereafter called the ship by the name ‘Gorgon.” Sailing around in this ship he exacted money from the islanders and slew those who refused to give. In this way he sailed eventually against the people of Seriphos and demanded money from them. They in turn asked for a few days time in which to collect the money. But instead they brought together and set up man-sized [sic] stones in the marketplace and then abandoned the island of Seriphos. Perseus sailed back to demand his money, but when he came into the marketplace he found no men but rather the man-sized stones. Thereafter, whenever any of the other island people would not pay their tribute, Perseus would say: ‘Be careful that you too do not suffer what the people of Seriphos did, who say the Gorgon’s head and were turned to stone.'” (6)

In other words, Perseus was a thug, a murdering bully who traveled from isaldn to island extorting money from innocent people. Not only that, but it appears that Perseus was so stupid he didn’t even realize that the people of Seriphos had tricked him.

In short, we feel that in the story of Perseus and Medusa, the hero Perseus isn’t at all heroic. The monster Medusa, on the other hand, is a figure of power, and a personage worth knowing — not in the least because knowing Medusa can help us to understand our selves.

One thought on “Medusa”