The second day of Nature Camp started with opening circle, as always. Our kindergarteners and first graders sat in a circle, and we sang one of the songs we learned yesterday, “The Earth Is Our Mother,” and the children remembered it well enough that they told me when I sang one of the verses wrong. Abby read a short story about Wangari Maathai, one of our Nature Camp elders. Kris also showed us a slug that she had found that morning, and we spent some time watching it before we released it in a shady place.

Then Kris introduced the them for the day: insects. Kris read some excerpts from Simon & Schuster Children’s Guide to Insects and Spiders. We learned what an insect is, and we learned the three parts of an insect (head, thorax, and abdomen). Kris also read to us a little bit about butterflies and moths, or Lepidoptera.

Kris next told us that we were going to make some pitfall traps to catch some insects, by burying a plastic cup in the ground. We learned the ethics of pitfall traps: you have to empty them regularly (at least once a day) to be sure the insects don’t die, and they should not be placed in full sun (the hot sun can kill any insects that fall in them).

The children enjoyed finding shady places to put the traps, and then digging holes in the ground with trowels and placing the plastic cups in the holes. Each child got to put at least one insect trap in the ground. While we were doing this, we stopped at the plum tree and managed to find a few more ripe plums to eat, enough for every child who wanted one to have one.

The highlight of the morning for me was Abby’s “natural paintbrush” project. The children got sticks (the handle of the paintbrush) and then attached leaves or pine needles or some other natural object to the stick with masking tape or rubber bands. 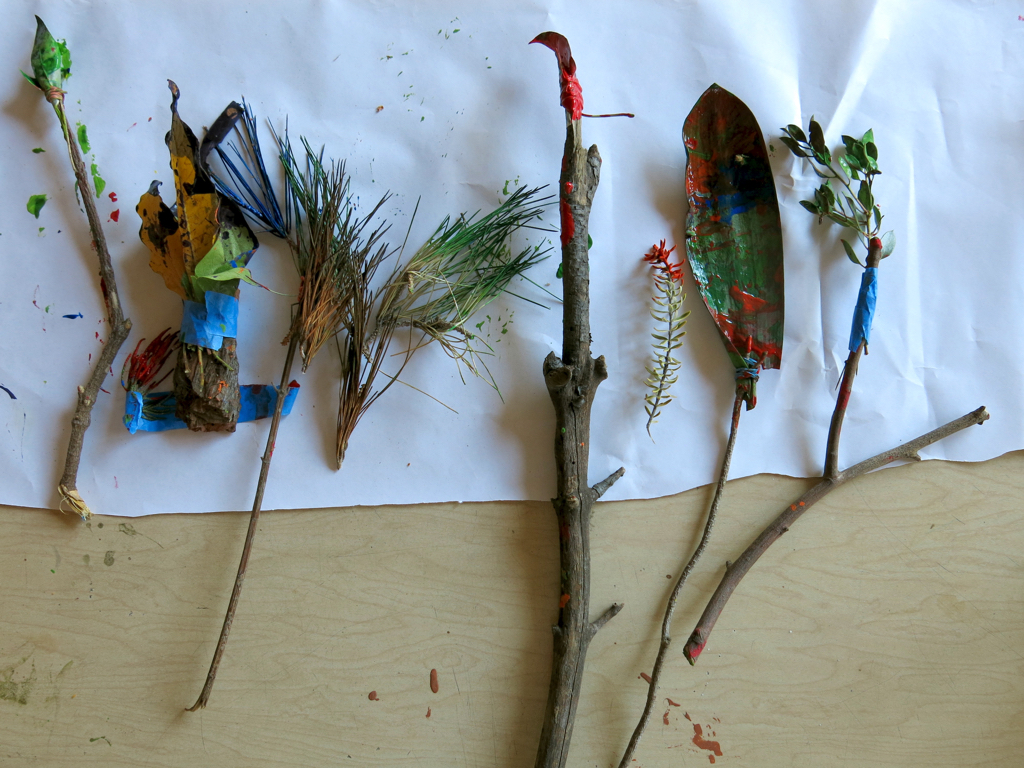 We taped large sheets of paper on two tables, and provided red, yellow, and blue tempera paint. The children enjoyed mixing their own colors, then spreading the colors with the natural paintbrushes. 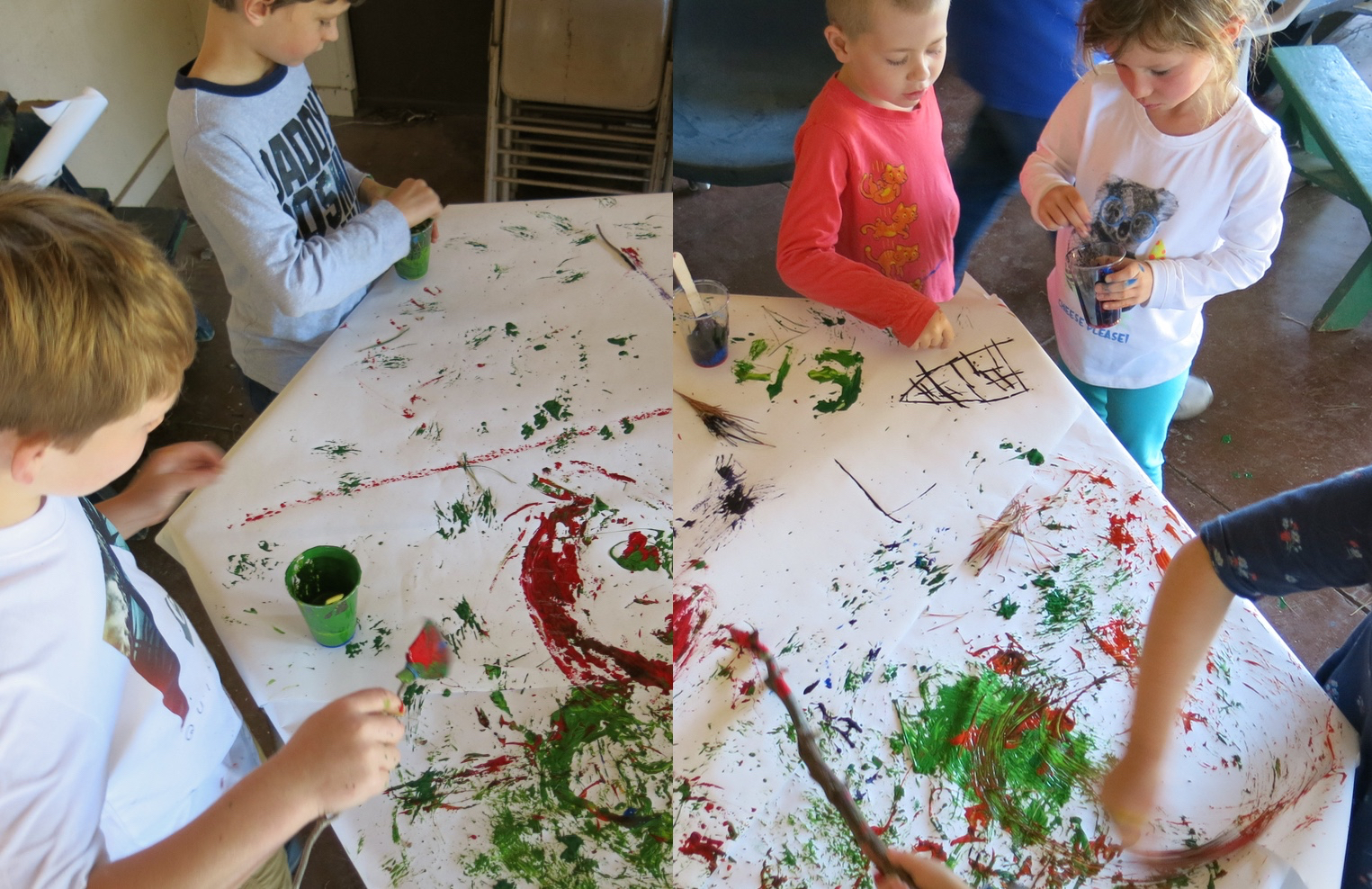 It was a great example of process art, since there was no “product”; instead the whole emphasis was on exploring the materials and colors.

After we painted for a while, it was time to walk over to Mitchell Park to play on the trees and eat some lunch. The children particularly enjoy climbing a tree that has a long branch that is almost horizontal the the ground, sloping gently upwards. It’s the perfect challenge for this age group. One or two of the children felt comfortable walking along the branch, but most of them moved along slowly, clasping it with legs and hands. Kris told them that they should only climb as far as they felt safe; at the same time she gently urged them to go a little beyond their comfort zones. One child was pleased to find that he could make it further along the branch than he thought he could.

While we were eating lunch, two California Gulls landed not far away and started fighting over some trash. We talked about how gulls like to eat trash, and I described the gull nesting colony near Charleston Slough. I also expressed my opinion that gulls are not particularly pleasant birds: they are loud, and messy, and kind of aggressive. While we were eating lunch, we also saw some butterflies flying by probably (Western Tiger Swallowtails), but it was breezy and the butterflies went by very quickly.

After lunch, Kris had a book that showed us how to draw slugs and butterflies. The children each drew some slugs and butterflies in their nature journals. One child drew a slug very carefully, trying to make it the same color as the one we had seen earlier in the morning. Another child drew a large number of slugs, and then dots all over them which he said was salt that was killing them. We talked a bit about why salt might kill slugs.

At last it was time to go back for closing circle. We sang “The Earth Is Our Mother” again, which the children knew really well by now, as well as “The Adaptation Song” which has a verse about how California Gulls adapt to their environment. To close the day, Kris read part of an Arnold Lobel book about a grasshopper.

All in all, a very satisfying day at Nature Camp. We worked on fine motor skills, gross motor skills, and knowledge about the natural world. Most importantly, we just spent time in nature, looking, touching, playing, being.

Note: We have media releases for all children depicted above. Nature Camp is sponsored by the Unitarian Universalist Church of Palo Alto.