In this interview from Oct. 21, 2015, Bay Area rapper Paris explains to AllHipHop.com why Donald Trump is so effective:

“In this era where everything is political, where politics is actually entertainment, we’ve got these news channels, and they’re custom-designed for the engagement of entertainment as though [politics] is celebrity-based. Look at Trump. Trump is all over the place because he’s entertaining. I watch Trump, and I’m thoroughly entertained by that shit, even though it’s racist vitriol that comes out of his mouth. It’s still something that’s engaging, and that’s why he’s winning. With these people who are rigid and trying to now out-do Trump with what they say, with the ridiculous shit they say, but people see through it and they recognize authenticity. And Trump is authentically an asshole. So you recognize that, hey, it is what he is.”

A year and a half later, this remains one of the best analyses of why Donald Trump is so effective. Whether you hate him or love him, you have to admit that he provides riveting celebrity-based polit-tainment. Trump is an entertainer extraordinaire. If it weren’t for Donald Trump, for example, we wouldn’t have had today’s riveting spectacle of James Comey testifying before the Senate.

I’m watching liberals, and to a lesser extent leftists, trying to attack Trump’s policies on political grounds. But Trump is an entertainer, not a politician. That’s a good thing, because his political skills are obviously quite low. But as an entertainer, he’s almost as good as Ronald Reagan.

That being the case, what I’d like to see is some cultural criticism of Donald Trump the entertainer. For example, take a look at Trump’s carefully constructed visual persona. Look at how his clothing (his costume, to use theatre terminology) projects a certain image: his clothing is carefully designed to hide his obesity, to broaden his shoulders, etc.; thus his costume aims to emphasize stereotypically “manly” physical characteristics in order to project a mood of male dominance and power. Or look at his hair and makeup, carefully designed to make him look younger; i.e., he doesn’t want to project an image of aged wisdom, he wants to project an image of middle-aged brashness and impetuosity. This carefully constructed visual persona supports a carefully constructed image as “authentically an asshole” — an illusion of a strong leader.

I can’t help thinking about the Wizard in L. Frank Baum’s book The Wizard of Oz. When Dorothy and her friends first see the Wizard, he appears in a different guise to each of them — a Great Head, a Lovely Lady, a Terrible Beast, or a Ball of Fire — and they are all intimidated by him. 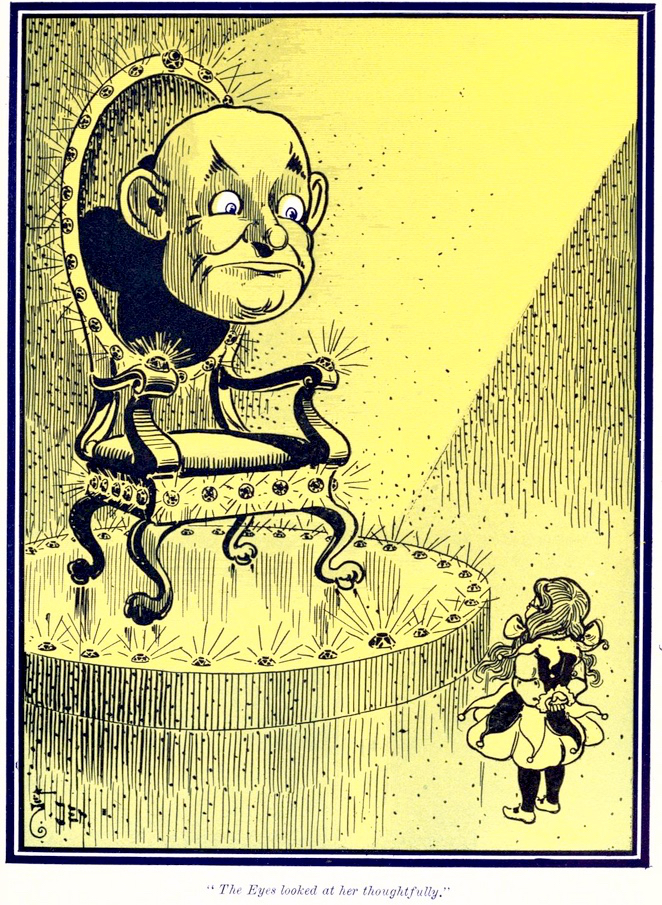 But the second time they go to see the Wizard, Toto, the little dog, knocks over a screen in the corner of the throne room, revealing “a little, old man, with a bald head and a wrinkled face.” When they confront him, he admits, “Exactly so… I am a humbug.” 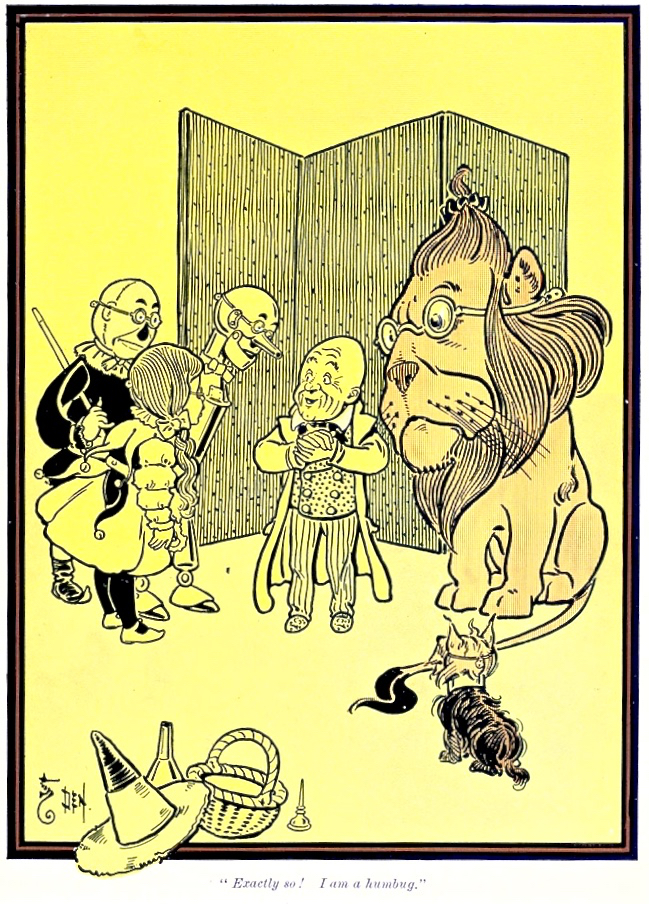 The analogy with Donald Trump should be clear. He is adept at appearing to each of us in the guise we find most enthralling; e.g., like Paris, I see Trump in his guise as an “authentic asshole” spewing racist vitriol. But cultural criticism is the seemingly powerless little dog who can knock over the screen and reveal him for what he truly is — a fat old man wearing a corset, with wrinkles and not much hair. So it is we can see that, insofar as any entertainer is a humbug, Donald Trump, too, is a humbug.

But entertainers are adept in selling illusions that work. The Wizard of Oz, humbug though he was, gave brains to the Scarecrow — a mixture of bran and pins (to show he is sharp) — a heart to the Tin Woodman — a silk heart stuffed with sawdust — and courage to the Cowardly Lion — liquid from a square green bottle that had to be drunk up to be effective, for “courage is always inside one.” And each of these illusions — the brains, the heart, the courage — each illusion proved to be completely effective.

For that is how entertainers work: they make illusions become real to us. And the good cultural critic never underestimates the power of illusion.