Presenters at the Environmental Ethics session of the Sacred Texts Human Contexts conference at 9 a.m. on Wednesday, May 25, were Lyndsey Graves, recent graduate of Boston University School of Theology; Michael Malley, student at Methodist Theological School in Ohio; and Etin Anwar, professor at Hobart and William Smith College.

I was particularly interested to hear Graves’s presentation, “Liberal vs. Literal?: Opportunities for Environmentally Ethical Pentecostal Interpretations of Genesis 1:26-28.” Pentecostalism is arguably the fastest growing religious group in the world, and as such could be a valuable interfaith ally in addressing the current global environmental crises.

Graves chose to address Gen. 1:26-28 because it has been such an influential text, with its injunction to “subdue” and have “dominion” over the earth. While this text has often been interpreted as giving humankind license to exploit other organisms and non-living things, eco-theologians have re-interpreted the text as calling on humans to be responsible stewards of the earth. Graves said that today, some Pentecostals are now “creatively coming up with ways to reinterpret Genesis 1:26-28.”

“I am focusing on the words ‘dominion’ and ‘subdue’,” Graves said. She pointed out that liberal Christians can say that this passage is not particularly important to them, or they can re-interpret the text to call for stewardship, “which I do not think is really justified in the Hebrew.”

But Pentecostals do not really have these options. Pentecostals assert the “inerrancy of the word of God, and because of this they do not aim to evaluate the Bible, but “to understand it and submit” to the will of God.

Graves reviewed the work of several relevant theologians who have provided readings of the text that might prove useful to Pentecostals.

Christopher Cone, according to Graves, uses a “literal hermenuetic” to arrive at a position supportive of environmentalism. He begins with an “anti-anthropomorphic” interpretation of the Bible, then asserts that the “dominion mandate was rescinded after the Fall.” Graves turned next to Anglican theologian Richard Bauckham, for whom the climax of creation is not the creation of humans on the sixth day; the climax of creation is the Sabbath, instituted by God on the seventh day of creation. She also referred to Jonathan Rice, who sees “dominion” as a message of hope for those who struggle daily with getting a living from the land. Finally, she mentioned Jerome Boone, who says that the human role is to maintain order in creation, and who adds that the Biblical concern for justice precludes exploitation of the earth.

Graves also referred to Cheryl Bridges Johns, a Pentecostal scholar and minister who has written on Pentecostal Bible study group. Johns found parallels between such Pentecostal groups, and the “base communities” of Latin American liberation theology.

Pentecostal hermeneutics, said Graves, is both trinitarian and praxis-oriented. “It is an event of the Holy Spirit occurring now,” she said. Pentecostal theology centers on God’s intimate involvement with Creation, and some Pentecostals move into a panentheistic understanding of the world. They are “quickly recovering a tradition of concern for justice,” a significant feature at the founding of the movement a century ago which had receded in the last century.

Pentecostals have “a huge emphasis on experience and story in creating theology,” she said. Therefore, a good way to enter into dialogue with Pentecostals is to tell one’s own story. “My primary advice is to testify. There is a huge tradition of story-telling,” she said. “It is a way to talk without debating.”

“One thing that Pentecostals bring to others in this debate,” she added. “They’re not afraid of talking about sin and conversion,” and that can be a useful addition to the problem of global environmental disaster.

Another speaker on the panel was Michael Malley, who discussed Thich Nhat Hanh’s enviornmental ethics. Nhat Hanh asserts that the purpose of sacred texts is to use their teachings in your daily life. “Thich Nhat Hanh is trying to apply [Buddhist] texts in new ways, because they can be applied.” But, said Malley, Nhat Hanh reads these texts “expansively.”

The third speaker, Etin Anwar, speaking as a moderate Muslim, traced a tradition of moderation in Islam, “an ethical framework that values the interdependency and co-existence among creatures.” When talking about the ecosystem in an Islamic context, God is always included “at the apex.” With this in mind, she quoted the Qu’ran, 38:27, “Not without purpose did We create heaven and earth and all between.” In this understanding of the universe, humans are understood as God’s “vice-regents” and “self-abiding servants.”

This applies to climate change, she said. “The current climate change issue challenges our relationship to earth,” it is a materialism related to a lack of spirituality. “Humans choose the task” of being vice-regents,” she said, but “immediately we are foolish” and we don’t live up to the trust given us by God. She aims to “raise an environmental consciousness” among Muslims, tying this consciousness in to “the general concern of Muslims to do good.” 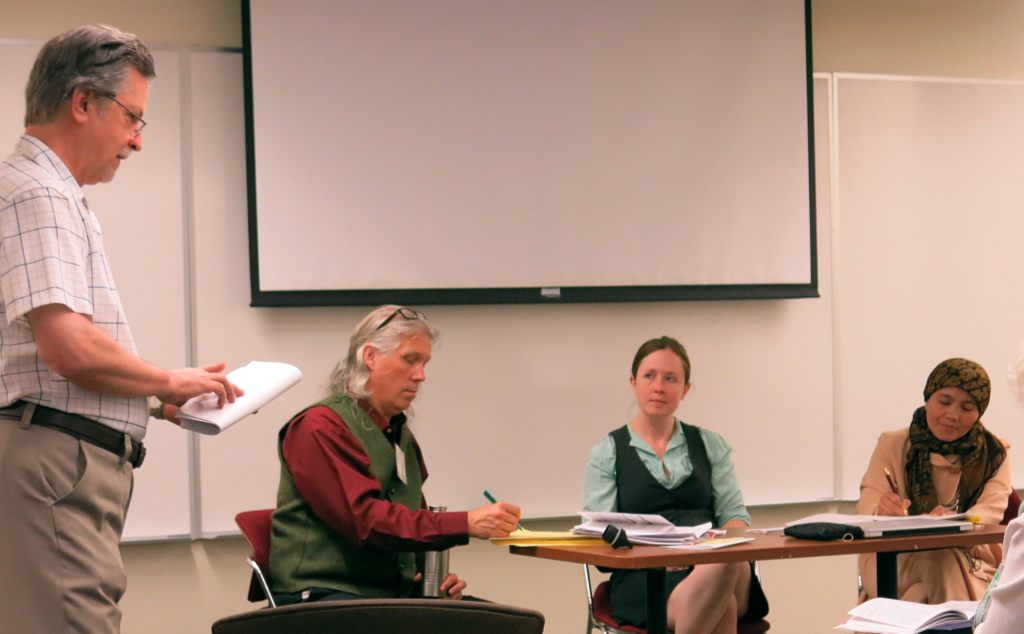