One of the problems you run into when looking for copyright-free sacred songs is that most of the public domain songs out there are Anglo-American or African American, and Christian. That being the case, I’m willing to stretch the definition of “sacred song” quite a bit to include songs on even vaguely spiritual topics. Thus this lovely Sioux chant counts as a sacred song because of the English translation: “Brother-in-law, walk straight forward, I will try to follow you”: I’m willing to consider that a song about moral integrity, and staying in community. 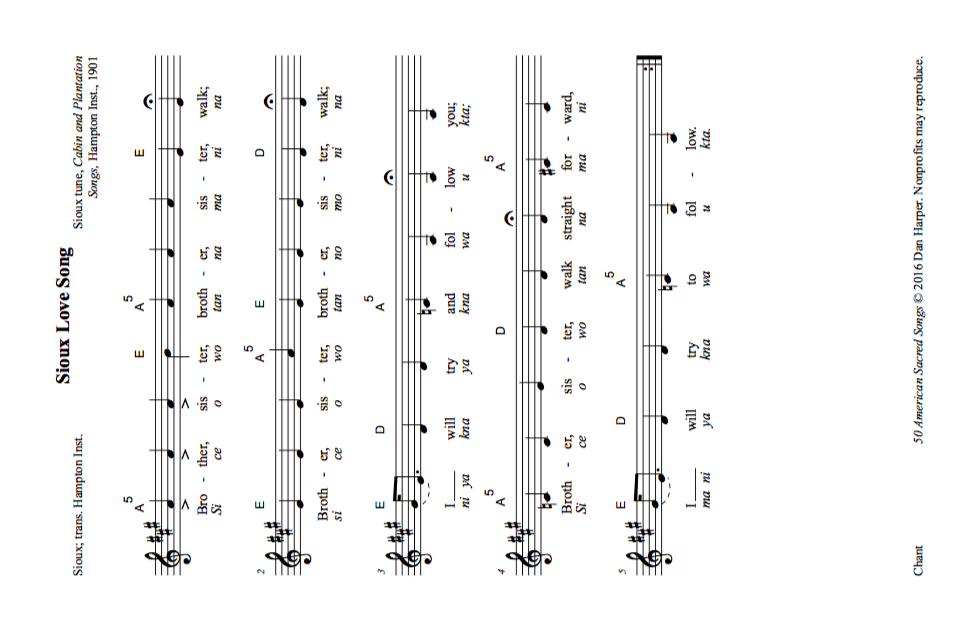 Historical background: Gen. Samuel Armstrong Chapman founded Hampton Institute to educate newly freed African Americans; perhaps the best know Hampton graduate was Booker T. Washington. Armstrong also aimed to “civilize” Native Americans, that is, have them adopt Anglo-American culture. Thus when by Thomas P. Fenner, Bessie Cleaveland, and Frederic G. Rathbun put together Cabin and Plantation Songs, as Sung the the Hampton Students in 1901, the bulk of the music was African American spirituals, but there were also a handful of Native American songs.

Performance notes: About the three Sioux songs in the book, one the editors of Cabin and Plantation Songs wrote: “I have indicated as far as possible the actual tones of the above songs. It is impossible to put into notation the literal manner in which they are sung, as it depends entirely on the singer to change as his fancy dictates.” Thus the songs should be really sung in unison (i.e., with no accompaniment) to allow for this kind of improvisation — but the average congregation will probably find it easier to sing with some kind of accompaniment.

In a more formal worship service, it’s probably enough to sing the song through three times, maybe the second time through trying to sing the transliterated Sioux words. In less formal circle worship, you could sing it till you fall into a trance.