The 9 a.m. session on Tuesday, May 24, of the Sacred Texts Human Contexts conference, titled “Critical Approaches to Faith and Environment I,” included presentations by John Fadden, adjunct professor at St. John Fisher College, and Shalahudin Kafrawi, professor at Hobart and William Smith College.

In “The Apocalypse of John: Friend and/or Foe of the Environment?” Fadden gave an analysis of the book of Revelation. As a Biblical scholar, he said that we have to be careful about using a two thousand year old text to discuss contemporary issues. John of Patmos, the author of Revelation, was writing for a first century C.E. audience in the Roman Empire; he was not writing for a twenty-first century audience, and did not specifically address global climate change or other ecological concerns.

“He’s also not really concerned with the end of the world in the way we have perhaps come to associate with the apocalypse,” said Fadden, “especially what we have come to call dispensationalism,” a contemporary interpretive framework that inspired the Left Behind series of books. “That’s not really his interest,” said Fadden, and “as Biblical scholars, we have to be sympathetic to the first century audience.”

However, the intended audience of the Bible is often forgotten. For example, in 2005, during George W. Bush’s presidency, some observers believed that Bush was influenced by an apocalyptic attitude, and those observers believed this attitude had an impact on Bush’s environmental policies. Some of these observers went to far as to wish that Revelation had not been included in the Bible. But Fadden says you can’t really blame a first century text for George W. Bush’s environmental policies. “The problem is not the text so much as how you might interpret it,” he said.

Thus Fadden is interested in seeing if there is an alternative, “eco-friendly way of reading the text.”

But first, Fadden examined some of the late twentieth century “doomsday writers.” These doomsday writers include people like Tim LeHay, Hal Lindsey, etc. “It’s not until the 1970s that these doomsday writers start to think about present day environmental issues and concerns as end-time markers,” Fadden said, “and it becomes part of their predictions for the end of the world.” Fadden also traced out how environmental issues have polarized American Christianity between liberal and conservative agendas.

Then Fadden reviewed several Biblical scholars who have offered eco-friendly interpretations of Revelation.

Theologian Harry O. Maier has reads Revelation so as to counter dispensationalist theology. Maier believes that dispensationalists constitute a very narrow section of evangelical Christians, which means that Revelation can be reclaimed by the vast majority of other Christians to support environmental action.

Fadden added that up until the Second World War, dispensationalists had far more concern about the environment. “That’s because in Rev. 21-22, a vision of a new heaven and a new earth coming down,” Fadden said, a reading which once inspired more concern for Creation.

Richard Bauckham is another theologian who offers an environmentally friendly reading of the Bible. Bauckham reads Rev. 4-5 as an eschatological worship. This worship doesn’t just involve human beings, it involves all beings, and therefore Bauckham opens up a reading of Revelation “that is both non-anthropocentric and also eschatological.”

A third theologian Fadden is interested in is Barbara Rossing. In her reading of Revelation, God does not want to destroy the world. Instead, said Fadden, “it’s the imperial powers of the world that want to do it.”

“We use the Bible to justify our [existing] environmental positions,” said Fadden. Because of this, “there is no way Rossing is going to convince someone like Pat Robertson” to change his theological position, nor to become environmentally responsible.

“But,” he concluded, “perhaps for those who have never thought about these issues, it might help.”

Shalahudin Kafrawi, the next presenter, spoke on “The Subjection of Nature in the Medieval Commentaries of the Qu’ran.”

Kafrawi began by pointing out that the Qu’ran is central to Islam in much the same way that Jesus is central to Christianity. He also pointed out that medieval commentators on the Qu’ran felt it was important to read Qu’ranic verse “holistically”; in the medieval context, one cannot look at just one or two passages from the Qu’ran.

A key element in Islam is that the Qu’ran proclaims the utility of Nature for human well-being. The Qu’ran forbids the destruction of nature, Kafrawi said. At the same time, there is a strong emphasis on God’s subjection of the natural world. This includes “the transfer of the agency for destruction from God to humans.”

“The Quran literally mentions that God subdued everything on earth and in heaven,” Kafrawi said. He reviewed many passages in the Qu’ran in which God subjects various parts of creation to gGod’s will. This subjection to God takes place through the laws of nature, it is not subjection through exploitation or domination. “These verses suggest that God subjects everything on earth and heaven,” he said.

Rather than extending God’s subjection of the natural world to human domination of Nature, medieval commentators instead aimed at human realization of Qu’ranic cosmology. “Nature is not something that serves as the object of human wants,” said Kafrawi, nature is in some sense divine.

By refusing to separate Nature and the divine, the medieval commentators arrived at a sense of cosmic order. In their view, Nature is not profane, it is not opposed to the divine. For their part, humans contemplate Nature as a mirror which reflects the divine.

The medieval commentators proved the existence of God through observing nature. Kafrawi summarized their approach as follows: “Pay attention to nature,” and from that come proofs of God. Then once you prove God through paying attention to Nature, you believe in God, and in the Islamic context you are obedient to God.

This leads ultimately to an important ethical point: humans should not exploit the natural world for their worldly benefit, they should appreciate the world as a reflection of the divine.

During the question period, Ashraf Adeel, professor of philosophy at Kutztown University, made what I thought was an interesting comment: regarding terms such as earth, heaven, etc., Adeel pointed out that medieval thinkers would have understood them substantially differently than we do today, or from the way the earliest Muslims understood these terms. Kafrawi did not seem interested in following this idea up, but my feeling (as someone who has had training in philosophical methods) was that Adeel’s comment provided an avenue for further enriching the reading of medieval commentaries.

(N.B.: My report on Kafrawi’s presentation is necessarily incomplete due to my own ignorance of the history of Islamic theology; I was not able to accurately record key terms and names of the medieval writers. Clearly, I am overdue for additional study of Islamic thought.)

Below: Photo from Tuesday night dinner at the Sacred Texts Human Contexts conference: 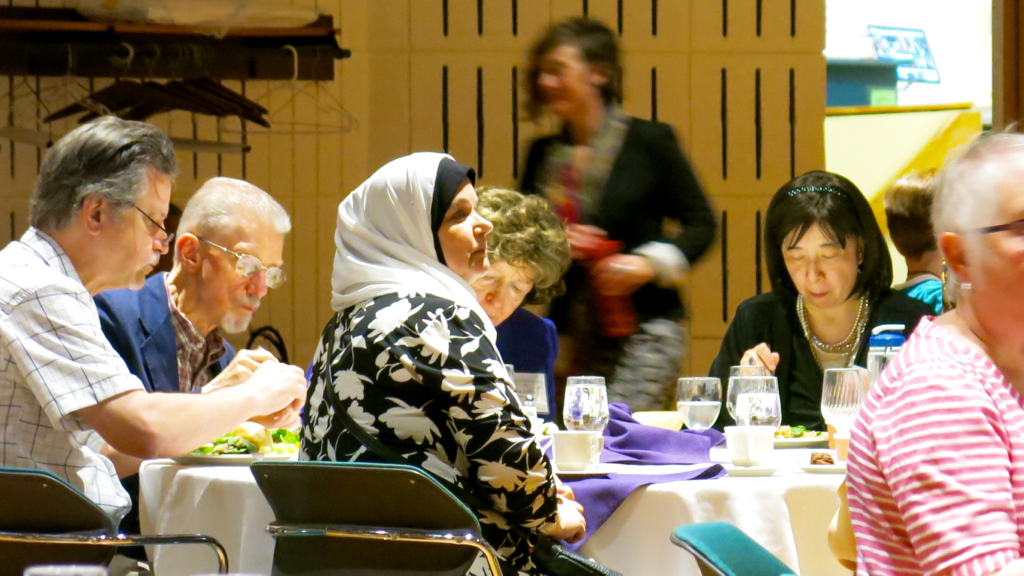