Yesterday, before I voted, I spent at least an hour doing some final research into the various candidates and ballot initiatives. The San Jose Mercury news and the San Francisco Chronicle had offered a reasonable amount of coverage of California ballot initiatives, and of the more prominent statewide elections. I already had most of the information I needed to cast my vote. Nevertheless, I went to the League of Women Voters (LWV) Web site to review information about those initiatives and candidates.

In the end, I was able to make what I felt were reasonably informed decisions on most of the candidates and initiatives. But I also realized that I had not spent enough time really learning about the issues and candidates. I should have attended candidate forums for local elections. I should have spent more time learning about statewide elections. Democracy takes time, and I did not put in enough time. And these days, I think political advertisements are so full of lies and innuendo that each time you see or hear one should count as negative time spent on learning the issues — which means spending even more time actually learning about issues and candidates.

Today, I was reading Hannah Arendt’s On Revolution, and came across this quotation from Thomas Jefferson: “If once [our people] become inattentive to the public affairs, you and I, and Congress and Assemblies, Judges and Governors, shall all become wolves.”

Is that howling I hear in the distance? 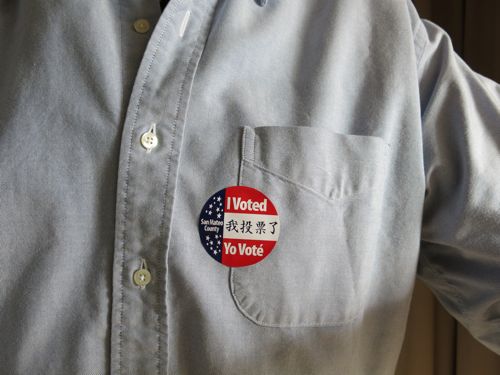