Thirty-six years ago, my mother called up her best friend Dorothy Lob, and asked Dorothy if she would come help with some sewing. I was about to head off to college, and my mother wanted to sew name tags into my clothing, and on all my sheets and blankets.

I was not allowed to help with the sewing. For all that she was a feminist, my mother never taught me to sew, never let me learn how to use her sewing machine, washing machine or dryer, or her iron or her ironing board. My sisters were allowed, even required, to learn how to use these things, but I was a boy, and boys mostly didn’t work with cloth and fabric. I was, however, allowed to hang out laundry to dry on the clothesline upon occasion, and in this I suspect that my mother was more progressive than her mother.

Although I was not allowed to sew, I did have to sit with Dorothy and my mother while they sewed on the name tags. We sat around the dining room table one bright summer day, and Dorothy was her usual cheerful self, chatting away and making my mother laugh and smile. Dorothy had a musical German accent; she had grown up Jewish in Germany, and had fled to America to escape the Nazis. I never heard her talk about it, but my mother said that was why she wanted nothing to do with organized religion, and that was why she could not believe in any god who could let something like that happen.

I vaguely remember helping fold clothes, and handing things to my mother and to Dorothy; mostly I probably just got in the way. I definitely remember that Dorothy was faster at sewing on name tags than my mother, and even I could see that she took less care at it. My mother took small careful stitches, securing each end of the name tag, while Dorothy sewed in big, bold stitches that quickly circled the entire name tag.

Although all the clothes I brought with me to college have long since gone to the rag bag, I still have some linens and bed clothes with those old name tags sewn in. I just found a comforter with a name tag sewn on by Dorothy: 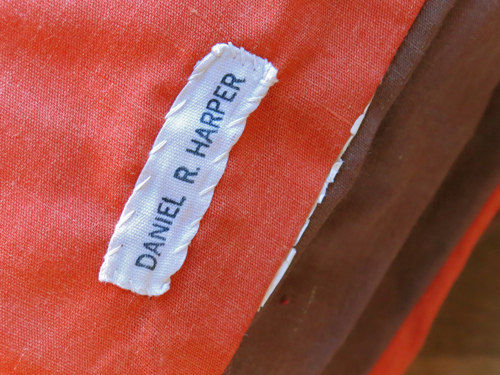 And I found an old towel with a name tag sewn on by my mother, so you can compare their stitches: 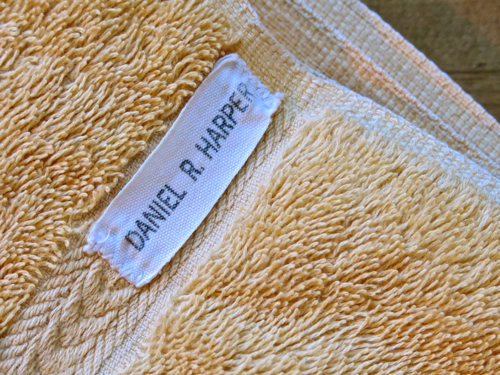 Their sewing reveals something about each woman’s personality: Dorothy, bold and unafraid and exuberant; my mother, cautious and careful. After they had finished sewing and Dorothy had gone home, my mother looked at Dorothy’s sewing with with some disfavor, and worried aloud that the stitches would come out and the name tags would fall off; thirty-six years later, I can say with some assurance that her worries were unfounded.

With two children in college and another in middle school my mother never had time again to sew name tags on my clothes or linens. Both women are now dead, and the dining room in which we sat is gone because that house was torn down to put up a McMansion. I get a little catch in my throat sometimes when I catch sight of one of those old name tags: you can still see something of those two strong personalities in those stitches.