In an essay titled “Jain Ecology,” Satish Kumar records a “water sutra” taught to him by his mother:

Waste no water
Don’t ever spill it
Water is precious
Water is sacred
The way you use water is the measure of you
Water is witness
Water is the judge
Your wisdom rests on your careful use of water.
(Satish Kumar, “Jain Ecology,” Jainism and Ecology, ed. Christopher Key Chapple [Harvard Univ., 2002], p. 187)

This represents a big difference in the ethics of ecology.

Live Nation said in a statement that the Foundation Room clubs are (according to them) all about “promoting unity, peace, and harmony.” Before you cynically respond “Bullshit!” — it may be that Live Nation’s management really did see the misappropriation of these religious images as promoting unity. Since they’re based in the U.S., we can assume that they — consciously or unconsciously — see the “Judeo-Christian tradition” as normative; and while “Judeo” is merely a modifier of “Christian” in this formulation, Judaism is still seen as somehow normative. Since Christianity and Judaism are part of mainstream U.S. culture, Live Nation’s management would never think of putting up a cross or star of David in one of their nightclubs.

Why then is it OK to use religious images from Buddhism, Hinduism, and Jainism? Well, part of the answer might well be that “religion” as a concept is a Western concept that only dates back to the Enlightenment. Prior to the Enlightenment, the West did not have a concept that corresponds to our current notion of “religion.” And “religion” as a concept was developed in part as a way to bolster Western colonialist ambitions: “religion” was defined in such a way that only Christianity (and perhaps Judaism, in a debased way) fit the definition; this allowed Western powers to justify domination of non-Western cultures on the grounds Christianizing them. (For more on the link between “religion” and colonialism, see e.g. Timothy Fitzgerald, The Ideology of Religious Studies [Oxford Univ. Press, 2000]; William T. Cavanaugh, The Myth of Religious Violence: Secular Ideology and the Roots of Modern Conflict [Oxford Univ. Press, 2009]).

Not surprisingly, colonized peoples are accorded less respect than the colonizers. This might make more sense if I put this in racial terms, since so many of us are thinking about race these days: in the Western worldview, Christianity is seen as the property of the West, which means it’s a white religion; while Buddhism, Hinduism, and Jainism are generally seen as having adherents who are people of color; while you wouldn’t use white people’s religious symbol in a night club, it would be OK to use the religious symbol belonging to people of color.

However, while colonialism and racism are strongly linked, I find it more helpful to view this dispute over religious imagery in nightclubs as a legacy of colonialism. After all, Buddhism, Hinduism, and Jainism do have white adherents, and there are strong traditions of black and Latinx Christianity. But non-Christian religions are still seen as somehow “primitive” or less advanced than Christianity, and thus may be accorded less respect; and just as in the past, this viewpoint still allows Western nations to see non-Western nations as suitable for colonial domination through both economics and military action.

Maybe I’m making too much out of this. But I do want to explain why Live Nation Entertainment didn’t put crosses or statues of Jesus Christ in their nightclubs; why does Jesus Christ get their respect, but not the Buddha? 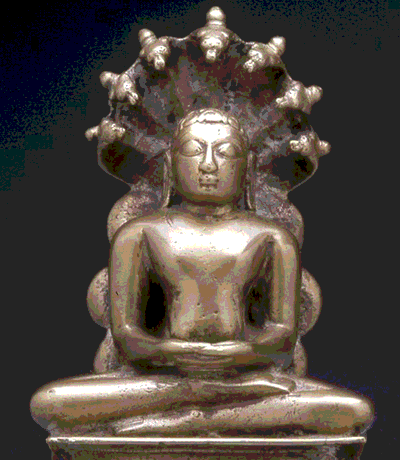 Donaldson’s presentation, titled “I Ask Pardon of All Creatures: The Centrality More Than Human Life Jain Text and Rituals of Repentance,” began with some basic information about Jainsim, including an introduction to the principle of ahimsa, not causing harm. Pointing out that Mahavira, the key figure in early Jainism, was a contemporary of Gautama Buddha, she said, “Both buddha and Mahavira prioritize ethical action over Vedic ritual practice.” [Note that I am not able to include diacritical marks for Sanskrit transliteration on this Web site.]

“Jainism posits a universe of which our universe is just one part,” said Donaldson, adding, “There is no deity.” instead, according to the Tattvartha Sutra, there are six substances, including jiva which may be interpreted as soul, or as sentient substance. All organisms house a jiva, she said, including microorganisms.

Jains believe in reincarnation after death. They also believe in karma, said Donaldson, which she described as a kind of “causal entanglement. “Just to live in the world has a cost.”

“One’s own jiva might yet be reborn in a the body of a plant or animal,” said Donaldson, so care for other organisms is important, as one might sometime be reborn in one of those bodies. This leads to ethical concern for other beings.