Mabel Mead lived in Palo Alto for less than a year, but her life story is interesting enough to recount in some detail. A schoolteacher for many years, she was born Dec. 30, 1870, in Ledger, New York to Louise and Alexander Mead (Greeley Daily Tribune, May 12, 1961).

A short digression to tell something of her mother, Louise Mead:

The Cornell Alumni News, vol. 7, Dec. 21, 1904 (Ithaca, N.Y.: Cornell University), ran the following notice: ” ’98 B.S. The marriage of Miss Mabel Mead to R. J. Wright was celebrated at Greeley, Col., this fall. Mrs. Wright is now connected with the social settlement work in the Italian District of Denver. She has charge of the North Side neighborhood house, the centre of settlement work in the northern part of the city.” But I found no other mention of R. J. Wright, and Mabel had resumed the name Mead by 1905. Perhaps this mysterious event precipitated her removal to Stanford for a year of study?

In any case, by autumn, 1905 she was a student at Stanford, living with her mother Louise at 742 and later 750 Bryant St. (Directory of Palo Alto, Mayfield, Stanford University, Jan., 1906; Cornell Alumni News, vol. 3, no. 25, March 28, 1906). She studied Romanic Languages (Fifteenth Annual Register, 1905-06, Stanford University); however, her name does not appear in later alumni directories.

Further research might uncover additional information about Mabel Mead Marsh. It would, for instance, be interesting to search the membership records of the Greeley Unitarian church to see if the Mead family had been members there. It might also be possible to track down records of the Denver settlement house where she worked. However, it seems unlikely that we’ll ever find out what happened with R. J. Wright, and why she decided to attend Stanford at the age of 36. 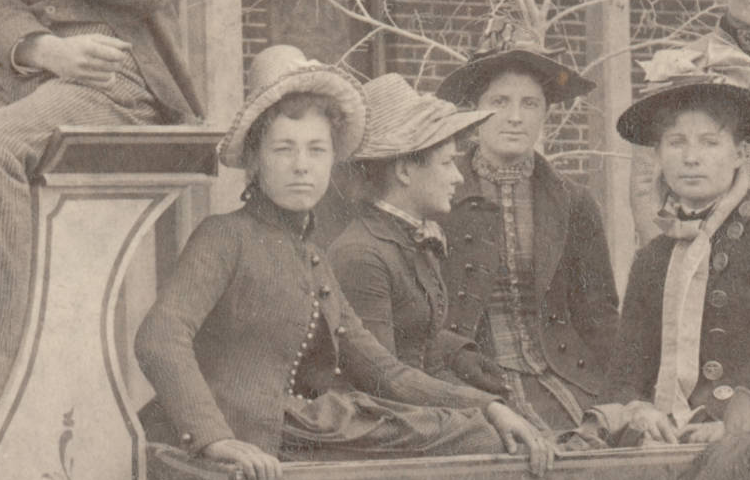 Above: Detail from a photograph in the collection of the Denver Public Library (call. no. Z-7616) showing Mabel Mead Marsh in a horse-drawn coach in Greeley, Colo., between 1890 and 1900; Mabel is at the back, right of center.