Agni, the ancient Vedic deity of fire, has always appealed to me. But until today, I’d only met Agni through poetry, like this hymn to Agni, the fifth hymn of the third book of the Rig Veda, as translated by Ralph Griffith:

Agni who shines against the Dawns is wakened;
the holy Singer who precedes the sages:
With far-spread luster, kindled by the pious,
the Priest has thrown both gates of darkness open.
Agni has waxed mighty by songs of praise,
to be adored with hymns of those who praise him.
Loving the varied shows of holy Order
at the first flush of dawn, he shines as envoy.
Midst mortal’s homes, Agni has been established,
fulfilling with the Law; Friend, germ of waters.
Loved and adored, the height he has ascended;
the Singer, object of our invocations.

Thus I was pleased to finally see a visual depiction of Agni at the Asian Art Museum this afternoon. He was part of a painting from the Ramayana, protecting Sita during her trial by fire, as imagined by a Balinese artist c. 1850-1900. Since this was a traveling exhibit, photography was not permitted, so I drew a quick sketch of Agni — leaving out Sita, Rama, the army of monkeys, the tongues of fire, and everything else in this detailed painting: 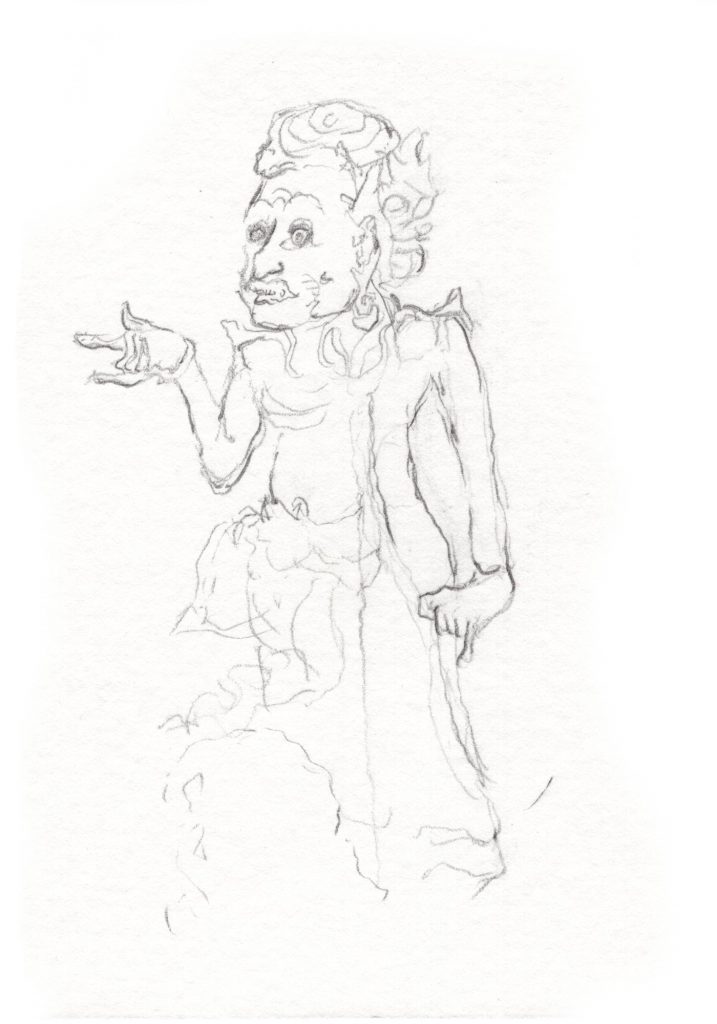 Carol and I wanted to put together a rain barrel for the middle school Sunday school class in eco-justice. Of course we waited until the last minute to purchase materials, and so when I saw the “DIY Rain Barrel Diverter & Parts Kit,” it seemed like the perfect solution. The packaging proclaimed, “Works with Plastic Barrels, Wooden Barrels and Garbage Cans.” So on a Saturday evening we purchased one of the kits and a 32-gallon trash barrel, and brought everything to Sunday school the next morning. 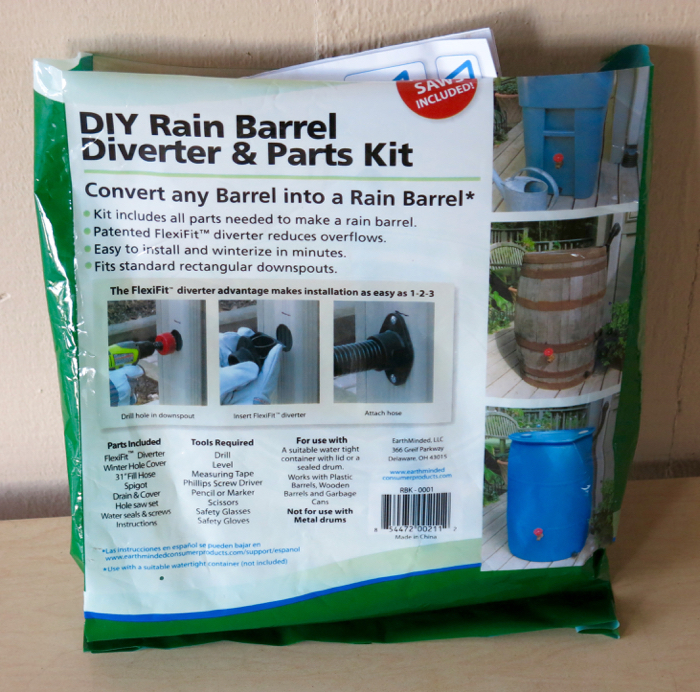 The class had fun drilling holes in the trash barrel for the plumbing fittings. But when we tried to install the fittings — a faucet and a drain hole — into the holes, the class found it very difficult to screw the fittings in. Before people got too frustrated, class ended, and after class I figured I’d try putting the fittings in myself — but they just wouldn’t go. After a lot of fiddling, I finally managed to force them into place. It started raining, so I quickly put the trash barrel, er, rain barrel next to an existing rain barrel that was already full. I directed the overflow from the existing rain barrel into the new rain barrel. It started filling. And then I saw that it was leaking around the drain hole. I wound up having to plug the drain hole with threaded PVC fittings, gasket material, and pipe joint compound. I should have replaced the faucet fitting as well, because by the next day, it, too, had a very slow but noticeable leak where it went into the trash barrel. And now, after three weeks, the sides of the trash barrel are very definitely bulging — it simply isn’t strong enough to bear up under the weight of the water. 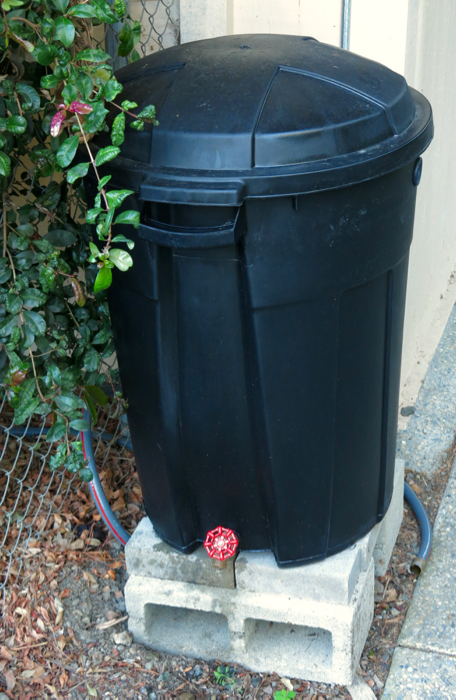 Instead of purchasing an expensive pre-packaged “DIY Rain Barrel Kit,” I should have gotten a couple of 3/4 inch bulkhead fittings, two sink faucets, and one of those blue plastic rain barrels. Live and learn.

Seven months after my dad’s death, I can tell you (as if you didn’t already know) is that grief takes time. At the rational, conscious level, I often feel as though I’m moving at the same pace that I always do. But then I look around, and see all the housework that isn’t getting done, and all the little things at work that aren’t getting done, and I have to acknowledge that I’m not getting as much done.

I think, though, that when it comes to hands-on work, like housework and growing things and making things, I’ve lost very little efficiency; whereas the less embodied tasks, things like checking email and project management and the like, are taking lots more time. I said I think this is so, but I already know that while I’m grieving my rational self isn’t good at thinking about and judging myself.

I am now bored by grieving. Last week, I was so bored I climbed up on a stepladder and cleaned the cobwebs in the high peaks of the kitchen ceiling, something that I haven’t done for two years. Yesterday, I was so bored I cleaned out all of my tool boxes, made a tool roll for chisels and one for files, and a toolbox for handsaws; in the process I found things I thought I has lost: a chuck key for an old drill, a whet stone, a pop-rivet gun.

But I find I have less tolerance for sitting at a computer. Screens narrow your field of view, and disconnect you from the real world of manipulable things. And, as we are now learning by watching the mental health of teenagers, computers induce and increase anxiety, often to pathological levels; grief is enough; I don’t need to add anxiety.

In short, I’m about where I’d expect to be: grief, so they say, bottoms out in half a year, and I do feel as though I’m on the upward trend.

A writer, biologist, and sexuality educator, she was born July, 5, 1873, in California. There she knew John Muir, and went hiking with him in the Sierra Nevada mountains. She received her A.B. in English from Stanford University in 1895, and her A.M. in entomology in 1902. After graduating from Stanford, she taught high school from 1900-1907; was assistant in nature study at the Univ. of Chicago, 1907-1909; taught biology at Calif. State Teachers College in Chico in 1918; was a lecturer at Stanford 1921-1923.

She married Vernon Mosher Cady on Dec. 15, 1908, at the Abraham Lincoln Center in Chicago. The Abraham Lincoln Center was a Unitarian church and community center with permanent and transient residents; Bertha and Vernon had both lived in the Center in the summer of 1908. They were probably wed by Rev. Jenkin Lloyd Jones. They had two children: Carol (b. c. 1910) and Jean (b. c. 1913).

Bertha’s career encompassed biology and education. She and her husband co-wrote The Way Life Begins: An Introduction to Sex Education (New York: American Social Hygiene Assoc., 1917). As the Girl Scout National Naturalist, she wrote for, or wrote in their entirety, many Girl Scout publications.