Carol and I just voted. No lines, no waiting. No anxiety — at least, no anxiety in the voting process itself. 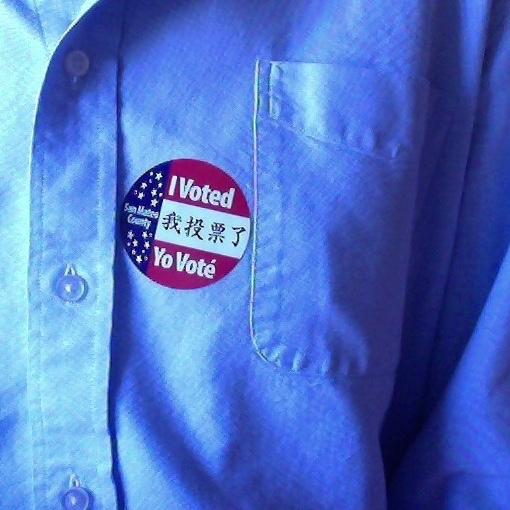 Today’s Daily Journal, our local freebie newspaper, reports that the Good Shepherd Episcopal Church in Belmont, Calif., is hosting a “stress-free zone” this evening — a place where you can go and not talk about politics, and not look at media. Rev. Michael Arase-Barhau of the church suggests people bring knitting, a book to read, adult coloring books, whatever.

Carol and I have a different destination in mind: we’ll be going to sing Sacred Harp music at Inder’s house in Oakland. And last night, we went to our congregation for a song circle organized by VJ, in the spirit of election eve song circles (the difference was that ours allowed any gender to participate). I don’t do adult coloring books (maybe I should), but singing works for me as a way to reduce anxiety.

It’s not just the presidential election. Here in Silicon Valley, we have a number of local ballot initiatives for rent stabilization measures. These initiatives are proving to be divisive. In our congregation, we have people on both sides of the rent stabilization issue, and while there isn’t any visible rancor, there are definitely some people who know not to talk local politics with each other.

Maybe this is the biggest problem. Here in the U.S., we lack skills in talking about disagreement. You either agree with someone, or you refuse to talk with them. You don’t like Hillary Clinton? then you won’t talk to a Clinton supporter. You don’t believe in God? then you’ll refuse to talk to Christians. We Americans believe in competition rather than collaboration; in market-based decisions rather than wisdom-based decisions; in individual rights rather than communal good.