Eight hours of driving today, with an hour for breaks and lunch: we were on the road from 9 in the morning until 6 in the evening. Both of us have driven this stretch of Interstate 90 too many times, and it is no longer exciting. Not the Mohawk River winding through the foothills of the Adirondacks, not the vineyards of western New York State, not aged and mysterious industrial buildings, not even crossing and re-crossing the Erie Canal: none of it captured our attention.

Instead, we read to each other from the New York Times and the Boston Globe. The stories of the Republican National Convention were the most fun to read out loud. Today’s New York Times reported that “a 65 year old coauthor of several books with Donald Trump,” who “is considered part of the extended Trump family” took the blame for plagiarizing Michelle Obama’s 2008 speech before the Democratic National Convention while writing Melania Trump’s 2016 speech before the Republican National Convention. We speculated that the Trump campaign needed someone to take the blame, found Meredith McIver who was getting ready to retire anyway, promised to take care of her financially…. Boston Globe columnist Yvonne Abraham made a public apology to Mitt Romney, saying she was sorry that she was so hard on him, and wishing for the days when he was the Republican presidential nominee: “Lord, how I long for stage-managed and boring now.”

The current presidential campaign is so surreal, I wish Hunter S. Thompson were still alive so he could report on this year’s campaign the way he reported on Richard Nixon and his political opponents in Fear and Loathing on the Campaign Trail 1972. What Thompson could have done with Trump, Clinton, Cruz, Sanders, Carson, and company! In 2016 we lack a literary genius of that magnitude with a serious interest in, and knowledge of, politics — so much the worse for us.

The hours sped by as we read aloud to each other. When we tired of politics, we switched to one of Simenon’s Inspector Maigret novels: Maigret, with his unblinking ability to look into the heart of base human motivations. If Maigret had been a writer instead of a fictional character, he might have been an appropriate political reporter for 2016.

When my voice finally tired out, we drove in silence for a time through the rolling land along Lake Ontario. I thought about how different the landscape is from eastern Massachusetts where I lived for more than forty years, and which I still take to be the norm. I thought, too, about how nice it has been to be able to speak Eastern New England Dialect, even though there aren’t as many people who speak in dialect any more, and fewer still who speak the West-of-Boston accent which I grew up with.

Carol made fun of me a few days ago because I don’t always talk in dialect; I tried to explain to her that speaking in dialect is dependent on context, especially now when there are so many outsiders who speak in other dialects. She just pooh-poohed me. I had a long conversation a few days ago with someone who speaks the same accent of Eastern New England Dialect that I do, and he kept me entertained for half an hour with his anecdotes of people he had known. I realized that all his anecdotes revealed a precise understanding of the exact class status of the people in the anecdotes; nor have I seen that level of attunement to class status in the other parts of the United States where I have lived (the Chicago area, the San Francisco Bay area).

I noticed that most of the native speakers of dialect with whom I spoke in the past few weeks felt some sense of bitterness or resentment towards people to whom they consistently referred to as “entitled”; I understood this resentment more broadly as resentment towards members of an economic elite who are not rooted in a place, the elite who are part of a globalized economy and who might live anywhere, anywhere in the world. The people in this elite — globalized, college-educated, well-traveled, in the upper five percent economically — are mostly unaware of how they treat others, how they assume that all the world is theirs for the enjoying thereof. This helps explain some of Donald Trump’s appeal, at least to me: he comes from Queens, he’s a brash New Yorker, he eats fast food; he may be filthy rich, but he knows where he’s from and he still talks like where he’s from — just as many people forgave Bill Clinton for some of his brashness and narcissism because he always knew he was from Hope, Arkansas, and talked that way.

We arrived in Erie, Pennsylvania, in time for dinner. Carol seems to have an instinct for finding the local food co-op, and before long we found ourselves in the parking lot of Whole Foods Co-op on West 26th St. It was clean, well-lighted, staffed by hip-looking young people with tattoos and black clothing, and patronized by cultural creatives (some of whom were too cool for school). The Co-op had free wifi, which was nice and fast. I hate to admit it, but we spent the whole evening there. 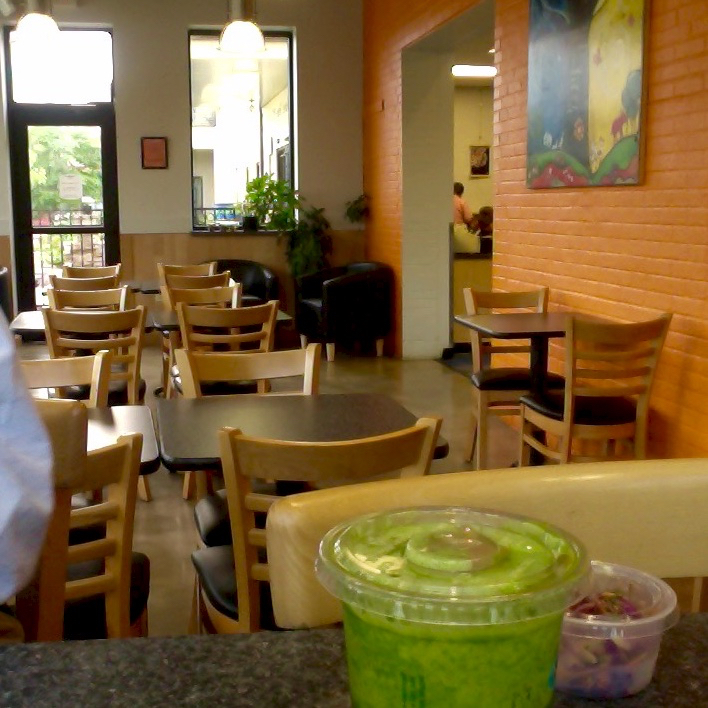