Carol had some business that kept her out until almost midnight, so we got a late start this morning. It was a perfect New England morning: warm but not hot, a pleasant breeze, blue skies. We decided to take a walk at Walden Pond before we took care of a few last things at Dad’s condo. So we drove to Walden Pond.

The parking lot was almost full when we arrived. Everyone else was headed towards Walden Pond, but I convinced Carol to walk towards Goose Pond first. We went down the bluff to where the pond should be, but instead of water we found a grassy plain; Goose Pond was completely dry. Dying water lilies, still touched with green here and there, in the two low points of the pond bed showed that there had been water not too long ago. Killdeer called from the grass in the pond bed, and a Red-tailed Hawk screamed overhead. We picked a few huckleberries, but they were seedy and dry. “They haven’t had enough rain,” Carol said. 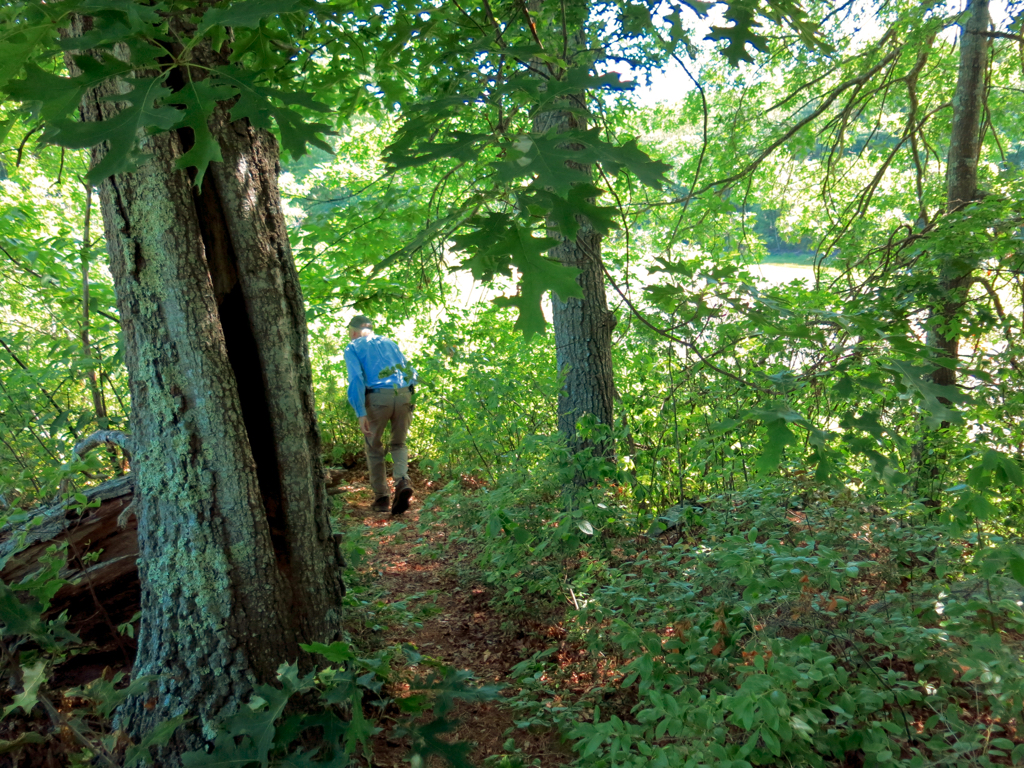 Above: A trail around Goose Pond; you can see the open grass in the bright sunlight beyond the trees.

After an hour or so, we headed to Walden Pond. Carol stopped to talk to a J., a park employee with a Ph.D. in biology who had studied the invertebrates of Massachusetts beaches. Now she’s a park interpreter who not only knows a lot about biology, but also is well-read in the secondary literature of Thoreau. Carol wanted to know how the wastewater from the new visitor’s center, currently under construction, would be handled. J. told us that it would be pumped over to the site of the former trailer park, because a study found that groundwater from the trailer park site did not flow into Walden Pond. I found the research online: John A. Coman and Paul J. Friesz, “Geohydrology and Limnology of Walden Pond, Concord, Massachusetts” (U.S. Geodetic Survey, c. 1999). Skimming over this paper, I learned that:

Given the state of Goose Pond, it was not surprising that when we got down to Walden Pond, the water level there was quite low. Last time I was at the pond, the water was high enough that there were places where it was difficult to walk along the water’s edge, because the water came right up to the bushes. Today there were sandy beaches at least twenty feet wide all around the pond.

Walden Pond is not an isolated place, and there were swimmers and sunbathers dotted all around the perimeter of the pond. I used to walk around Walden in the fall and spring, so it seemed to me as though there were lots of people at the pond today, but Carol thought it seemed empty. From a historical perspective, Carol was closer to the truth than I: “The Concord Herald newspaper reported on September 5, 1935, that summer Sunday afternoon crowds reached 25,000 at Walden Pond and that total summer attendance was 485,000” (Colman and Friesz, p. 52). And really, all I had to do was think back to when I was a child, when the town of Concord offered swimming lessons at Walden; I remember hordes of children walking down the bluff from the school buses. By the standards of the past, there weren’t many people at Walden Pond this morning. 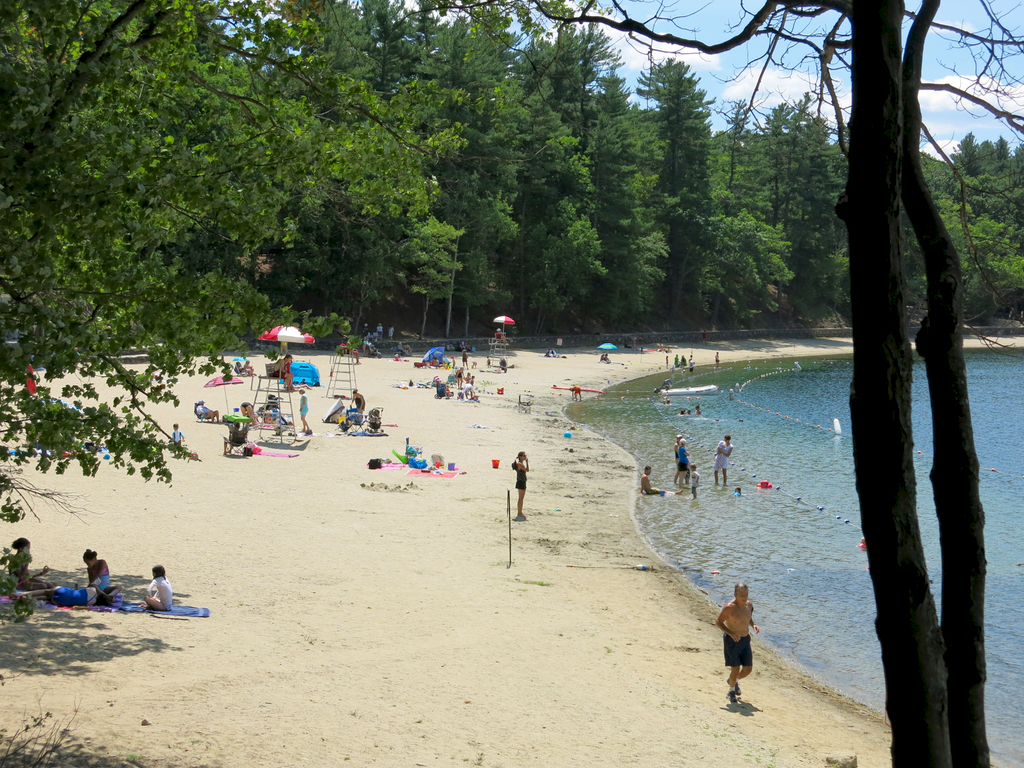 We walked around the pond. Once we got away from the sandy shores of the pond, we saw far fewer people: a woman showing two children the site of Henry Thoreau’s cabin; a runner who was too obviously pleased with the condition of his body; an man with wild gray hair, a wide-eyed expression, and a walking stick (I thought to myself, perhaps unfairly: he must be a Thoreau fan); and two women off in the distance wearing brightly-colored knee-length dresses. The rest of the people were in or within thirty feet of the water.

We left Walden Pond, took care of one or two things at the condo, and drove to Westborough, the first leg of our drive home.