“Swing Low, Sweet Chariot” is a classic spiritual song from the African American tradition. It may have been composed by Minerva and Wallace Willis. Here are two arrangements of this song.

The first arrangement is by the Fisk Jubilee Singers. They published their arrangement in The Story of the Jubilee Singers: With Their Songs (New York: Biglow & Main, 1872). Notice that their arrangement has the first note (“Swing…”) sung on the downbeat; this is different from a common contemporary interpretation of the song where the first note is a pickup measure. The original arrangement of the Fisk Jubilee singers had a fermata over the second note of the opening phrase (“…low…”), and again later where the word “low” is sung; I have omitted the fermata, both because it may confuse congregational singing, and to make this arrangement more consistent with the next arrangement. 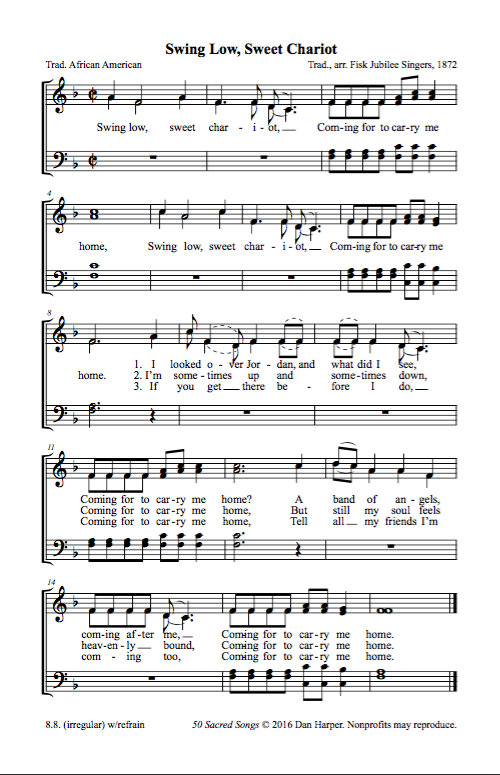 The next arrangement is derived from Harry T. Burleigh’s 1918 arrangement of this song for piano and low voice. Burleigh was arguably the first great African American composer of art music; he studied with Dvorak, and helped introduce Dvorak to American folk music. One of the verses and one of the choruses of Burleigh’s piano accompaniment can be easily and logically transcribed for SATB choir, as in the following arrangement. 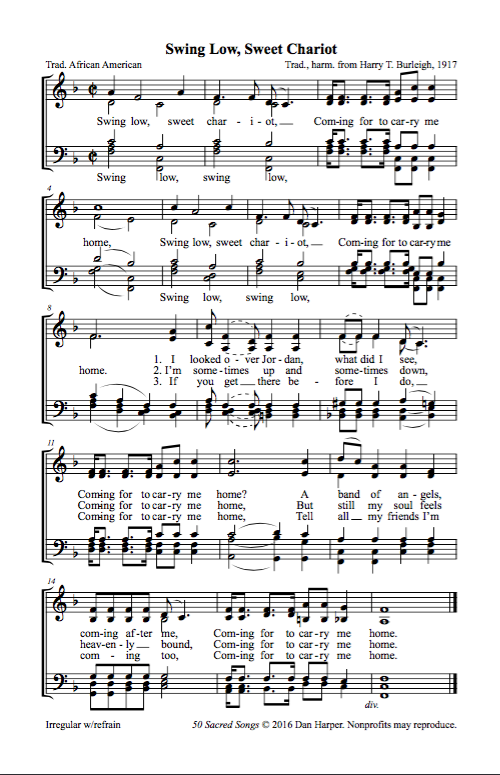 Historical background: According to the research of Currie Ballard, historian-in-residence at Langston University, Oklahoma, this song may have been composed by Wallace and Minerva Willis. Ballard’s research was reported by Melanie Eversley, “Story behind spiritual ‘Sweet Chariot’ emerges,” USA Today, posted online August 14, 2006.

According to Ballard, Wallace and Minerva were enslaved African Americans owned by Brit Willis, who was half Choctaw and half white. Because of his Choctaw ancestry, Brit was forcibly resettled from Mississippi to Oklahoma by the U.S. government, and he took Minerva and Wallace with him. Brit rented Minerva and Wallace to the Spencer Academy for Choctaw boys, located near Doaksville, Oklahoma. Minerva and Wallace Willis sang “Swing Low, Sweet Chariot,” “Roll, Jordan, Roll,” and “Steal Away to Jesus” to the students at the school. Upon hearing them sing, the headmaster of the school sent “Swing Low, Sweet Chariot” to the Fisk Jubilee Singers, who then included the song in their repertoire.

This research does not address the question of whether Minerva and Wallace Willis actually composed the song, or whether they in all good faith (like so many folk musicians before and after them) thought they had composed a song that they had absorbed from the folk tradition.

This song, like many other spiritual songs in the African American tradition, has been interpreted as a code song, used on the Underground Railroad to help enslaved persons escape. Some sources claim that the words to the song were altered to “Swing low, sweet Harriet,” referring to Harriet Tubman, the famous Underground Railroad conductor.

Performance notes: The Fisk Jubilee Singers were first recorded more than three decades after their founding, after many changes of personnel and music directors. In spite of the lapse of time, those early recordings are the best indication we have for the vocal style of the nineteenth century Jubilee Singers. These early recordings reveal a disciplined ensemble with light vibrato, careful enunciation, and precise intonation. A 1909 recording of the Jubilee Singers is available online here; be sure to note that the 1909 recording uses a different arrangement from the 1872 version. When using the 1872 arrangement above for congregational singing, the downbeat on the first syllable may have to be emphasized at first, until the congregation gets it in their collective ear; the harmony arrangements are simple enough that they may be taught to the average congregation.

The arrangement by Harry T. Burleigh is more harmonically complicated and shows influences of both classical music, and of early jazz. The arrangement above can be sung by SATB choir (or more precisely SATBB, since the low voices divide into bass and baritone); typical choral or art music performance is appropriate for Burleigh’s music. This arrangement is also suitable for the congregation singing in unison with piano accompaniment; the pianist could also substitute Burleigh’s wonderful original piano accompaniment from his 1918 composition from which this is adapted. Congregational musicians may wish to seek out Burleigh’s compositions based on spirituals for vocal soloist and pianist; many of these compositions would fit nicely as performance pieces in liberal religious worship services. Some of these scores are in the public domain in the U.S., and are available online here; see also The Spirituals of Harry T. Burliegh, for low voice and high voice (Belwin-Mills Publishing, 1984).

For an introduction to this sacred song project, including information on copyright, click here.