I spent the afternoon and early evening hiking around Pescadero Marsh. At the beach near the end of Pescadero Creek, I saw many of the same animals I saw during my last trip here: Harbor Seals (Phoca vitulina): shells of the California Mussel (Mytilus californianus): the remains of Red Crabs (Cancer productus), Pacific Sand Crabs (Emerita analoga), and Eccentric Sand Dollar (Dendraster exentricus); Black Oystercatchers (Haematopus bachmani), etc. 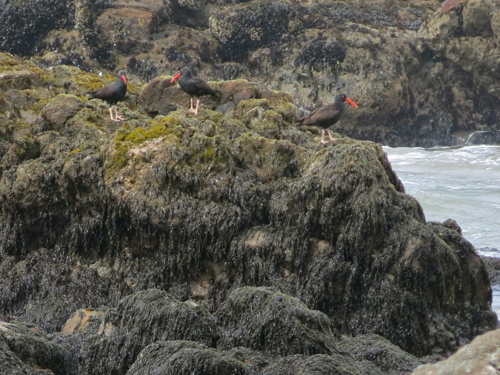 Above: Black Oystercatchers on the rocks at Pescadero Beach 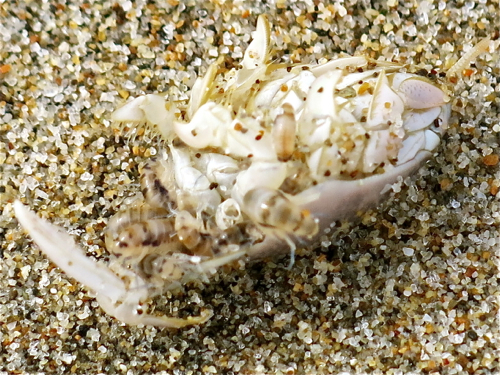 Above: The remains of a Pacific Sand Crab being eaten by unidentified smaller organisms

Walking around the marsh, I saw an even greater diversity of animals: warblers hiding in willow thickets, butterflies cruising in amongst the coastal scrub, raptors hunting over the marsh, huge nests made by wood rats. This is an area of ecotones, where several different plant communities meet one another: ocean comes up against beach; sandy beach comes up against coastal scrub; coastal scrub comes up against saltwater marsh; freshwater riparian corridor and marsh flows into saltwater marsh. I’m amazed by how many biomes, and organisms adapted to live specifically in those biomes, can be found within a short walk: I saw Arroyo Willow (Salix hinsiana) growing next to an ephemeral freshwater stream; fifteen minutes of slow walking brought me to Snowy Plovers (Charadrius alexandrius) who live and breed on sandy beaches above the high tide line.

And then there are the organisms who happily move from one biological community to another, exploiting the resources of all of them. Like gulls (Larus spp.) who fly everywhere, and eat everything. Everywhere I went, I saw gulls. As I walked north on the beach, I cam across two Western Gulls (Larus occidentalis), in beautiful fresh plumage, snacking on what remained of a Harbor Seal: 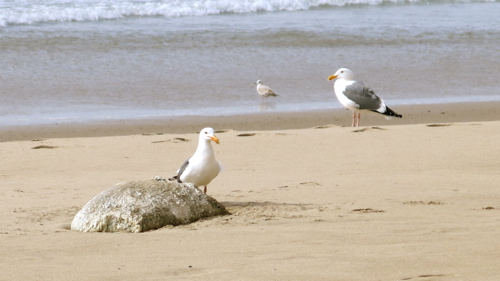 I walked up to the dead Harbor Seal to have a look; the gulls, looking grumpy, gave way to my intrusion, watching me from a safe distance. The corpse didn’t stink, but there was no longer a head, and it looked like it had been lying there for a while. I guess gulls will eat just about anything.