Once upon a time, I had a copy of John Renbourn’s recording “A Maid in Bedlam” on cassette tape. I used to play that cassette tape while driving up to the White Mountains to go hiking. I think this was before I had a car with a cassette player — I have a vague memory of Gary, one of my hiking partners, playing this tape on his boom box in my beat-up Chevy Celebrity. The point is that this was a while ago.

This recording captured me with its mix of musical influences. This was a time when early music was still something new; Renbourn’s band performed tunes by Renaissance composers Hans Neusidler and Tielman Susato on recorders, steel-string guitar, and tabla. Was this folk music, or early music, or world music? Or, given the strange harmonic direction they took in the medley of tunes by Neusidler, were they dabbling in new music? And they did strange things to traditional tunes from the British Isles as well: the traditional “A Maid in Bedlam” had that non-traditional the tabla, and the recorders, and the steel-string guitar, and a little bit of rock and roll. “A Maid in Bedlam,” though a traditional song, had a flavor of contemporary folk. The medley “The Battle Of Augrham / Five In A Line” definitely slipped into rock and blues territory. As for “Reynardine,” it was as sexy and crazed in its own understated way as the punk rock that I listened to obsessively.

Much of the music from the late 1970s and 1980s that I used to listen to obsessively has not held up well; a lot of it now sounds heavy-handed, or poorly done, or just plain boring. Much of Renbourn’s music still sounds fresh and interesting, no doubt due in large part to his high level of musical intelligence and his virtuosity on his chosen instrument, the steel-string guitar. But perhaps most important was his ability to mix musics from different cultures and different times, have it make emotional and musical sense, and not leave you feeling as though he had simply been plundering other people’s music. How many musicians can cover five centuries and three continents, avoid pastiche and misappropriation, and still make musical sense? — not many.

Not that Renbourn’s entire career was so brilliant. In fact, most of his career was musically boring. Too often, Renbourn slid down into that musical performance realm inhabited by technical virtuosi who make their living impressing wanna-be guitarists with blistering fingerwork and fretboard hysterics. Renbourn’s topical songwriting was never particularly interesting; he was not a singer-songwriter worth paying attention to. His early forays into Renaissance music were wonderful, but the early music world kept evolving and I don’t feel he managed to keep up with that ongoing musical conversation. And then there was the 1990s reunion of the 1960s band Pentangle — like so many reunion bands, 1990s Pentangle just plowed the same musical ground over and over and over again.

John Renbourn died of a heart attack on Thursday. 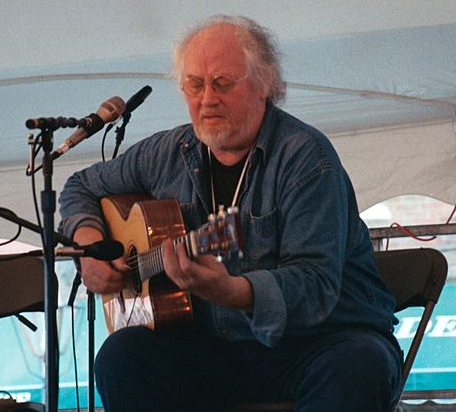 Above Renbourn at Customhouse Square, New Bedford, Massachusetts, July, 2005. We lived a block away at the time of this performance, but I was out of town at a conference. [Photo from Flickr by Thom C CC BY 2.0]