On May 1, 1886, some 350,000 workers went out on strike across the U.S., although the strike was centered in Chicago, where 80,000 workers marched along Michigan Avenue. This May Day strike was the culmination of a movement to obtain an eight-hour day for workers. All the railroads that went into Chicago, the major rail center in the country, stopped running. Many industries through the U.S. were paralyzed.

Generally speaking, the May 1 strike was peaceful. But on May 3, there was violence at the McCormick Harvester plant in Chicago. The workers there had been shut out of the plant, and scabs brought in. The workers were holding a rally outside the plant when police charged them, shooting into the crowd and killing six. 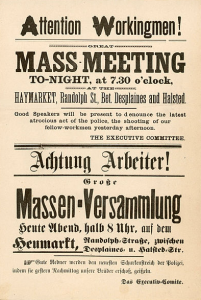 The violence escalated the next day, May 4, at rally in Haymarket Square in Chicago, that was called to protest the violence at the McCormick plant. The mayor of Chicago attended the rally, and there were hours of peaceful speeches by labor leaders. Late in the evening, the police decided to march into Haymarket Square and order the crowd to peaceably disperse. The leaders of the rally pointed out that were already peaceful. At this point, someone threw a bomb. Later, the newspapers and the city government, all of whom had an anti-labor bias, claimed that the rally’s organizers must must be held responsible for the bombing, though there was no evidence linking them to it.

Eight organizers of the labor rally, although seven of them weren’t even present at the time of the riot, were arrested on charges of murder. Civic leaders and the newspapers whipped up public sentiment against the eight organizers. Since many of the workers involved were immigrants, much of the media’s ire was directed at “foreigners.” No one seems to have mentioned the fact that the police marched on a peaceful political assembly, something that is supposedly protected by the First Amendment of the U.S. Constitution.

All eight organizers of the rally were convicted, and seven of them were condemned to death. One of these last committed suicide in his cell, and three more were hanged. Almost a decade later, then-governor of Illinois John Peter Altgeld issued pardons for the four dead organizers and the three still living, saying “The proceedings lost all semblance of a fair trial.”

In the years after the 1886 events, May Day came to be celebrated internationally as a day to celebrate workers’ rights. We still don’t celebrate International Worker’s Day in the United States, but as you dance around the Maypole dances, or sing your Beltane carols, or as you attend the occasional May 1st rally for immigrants’ rights — it’s worth remembering the other May Day.

(N.B.: In the image of the poster announcing the rally in Haymarket Square, notice that it is bilingual, in German and English, reflecting the fact that many workers were immigrants.)