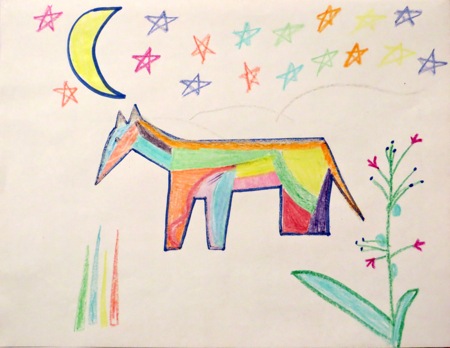 There was another river crossing it from east to West, it was the Male River. This Male River flowed through the Female River and on; and the name of this place is Tqo alna’osdli, the Crossing of the Waters.

There was no sun in this land, only the two rivers and the six mountains. And these rivers and mountains were not in their present form, but rather the substance of mountains and rivers as were First Man, First Woman, and the others.

In the West there lived the White Shell Hermaphrodite, who was then neither boy nor girl; later she became White Shell Girl, and still later she entered the Moon and became Moon Bearer. And with her was the big female reed which grew at the water’s edge. It had no tassel. Beyond her in the West there lived another stone people called the Hadahunes’tqin, the Ground Heat People. Still farther on there lived another twelve beings, the Corn Maidens, all of whom were females. And again, in the Far West, there lived four Holy Ones.

Within this land there lived the Kisa’ni, the ancients of the Pueblo People. On the six mountains there lived the Cave Dwellers or Great Swallow People. The Great Swallow People lived in rough houses of mud and sticks. They entered them from holes in the roof. On the mountains lived also the light and dark squirrels, chipmunks, mice, rats, the turkey people, the deer and cat people, the spider people, and the lizards and snakes. The beaver people lived along the rivers, and the frogs and turtles and all the underwater people in the water. So far all the people were similar. They had no definite form, but they had different names because they were different inside.

Now the plan was to plant. First Man called people together. He brought forth the white corn which had been formed with him. First Woman brought the yellow corn. They laid the perfect ears side by side; then they asked one person from among the many to come and help them. The Turkey stepped forward. They asked him where he had come from, and he said that he had come from the Gray Mountain. The Gray Mountain is the home of the Gray Yei, Hasch ei’ba’i, whose other name is Water Sprinkler. The turkey is connected with water and rain.

The Turkey danced back and forth four times, then he shook his feather coat and there dropped from his clothing four kernels of corn, one gray, one blue, one black, and one red. Another person was asked to help in the plan of the planting. The Big Snake came forward. He likewise brought forth four seeds, the pumpkin, the watermelon, the cantaloupe, and the muskmelon. His plants all crawl on the ground.

They planted the seeds, and their harvest was great.

This version of the Diné bahané is adapted from a public domain source edited by Aileen O’Bryan, The Dîné: Origin Myths of the Navaho Indians, Bulletin 163 of the Bureau of American Ethnology of the Smithsonian Institution, (1956), pp. 1-13. To read part one, click here.