The First World was small in size, a floating island in mist or water. On it there grew one tree, a pine tree, which was later brought to the present world for firewood.

But human beings had not yet evolved to their present form. The creatures of the First World were the Mist People. They had no definite form, but evolved to change to humans, beasts, birds, and reptiles of this world. There was a male and a female being who were to become man and woman.

Now on the western side of the First World, in a place that later was to become the Land of Sunset, there appeared the Blue Cloud, and opposite it there appeared the Yellow Cloud. Where they came together First Woman was formed, and with her the yellow corn. This ear of corn was also perfect. With First Woman there came the white shell and the turquoise and the yucca.

First Man stood on the eastern side of the First World. He represented the Dawn and was the Life Giver. First Woman stood opposite in the West. She represented Darkness and the End of Life.

First Man burned a crystal for a fire. First Woman burned her turquoise for a fire. They saw each other’s lights in the distance. When the Black Cloud and the White Cloud rose higher in the sky First Man set out to find the turquoise light. He went twice without success, and again a third time; then he broke a forked branch from his tree, and, looking through the fork, he marked the place where the light burned. And the fourth time he walked to it and found smoke coming from a home.

“Here is the home I could not find,” First Man said.

First Woman answered: “Oh, it is you. I saw you walking around and I wondered why you did not come.” 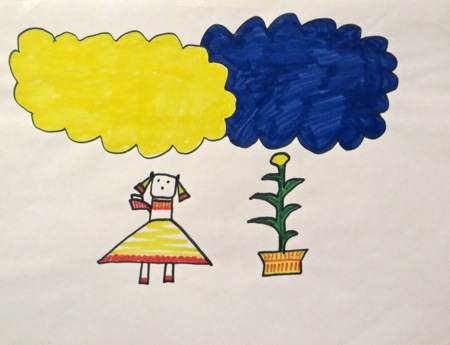 Above: Illustration of First Woman by a child in the UUCPA Sunday school, based on photos of Navajo rugs.