In the bustle of the pandemic, I almost forgot that the 250th anniversary of Universalism is celebrated today. This is the anniversary of the first sermon preached by John Murray.

Alas, too busy to say much about this now, but more on this soon!

For accessibility, the text of the lecture is below. Note that I may have altered the text a little when reading it.

END_OF_DOCUMENT_TOKEN_TO_BE_REPLACED

(Be forewarned: this is a blog post about theology. Some of us enjoy theology, but if you don’t, this will not be fun for you.)

Mark Morrison-Reed, in his lecture “The Black Hole in the White Psyche” (online here, and in the fall, 2017 issue of UU World magazine), asserts that Unitarianism appealed to members of the African American intellectual elite through the late nineteenth and twentieth century, citing the Unitarian affiliations of people like Frances Ellen Watkins Harper and Whitney Young. Universalist theology, on the other hand, did not appeal to African Americans:

“Universalism … was difficult for African Americans to embrace. A loving God who saves all is, for most African Americans, a theological non sequitur. Why? In an article entitled ‘In the Shadow of Charleston,’ Reggie Williams writes about a young black Christian who said, during a prayer group following the murder of nine people at Emanuel AME Church in 2015, ‘that if he were to also acknowledge the historical impact of race on his potential to live a safe and productive life in America, he would be forced to wrestle with the veracity of the existence of a just and loving God who has made him black in America.’ This is the question of theodicy: How do we reconcile God’s goodness with the existence of evil? In the context of Charleston, the context of Jim Crow, the context of slavery, what is the meaning of black suffering? Why has such calamity been directed at African Americans? If God is just and loving there must be a reason. If there is no reason, one is led to the conclusion that God is neither just nor loving.”

What Mark says is clearly true. Yet there were a tiny handful of African American Universalists during the nineteenth and twentieth centuries. What drew them to Universalism? END_OF_DOCUMENT_TOKEN_TO_BE_REPLACED

Now in print: a new reader’s edition of Hosea Ballou’s classic statement of universal salvation, A Treatise on Atonement.

This new edition has been edited for clarity and ease of reading. I broke up long paragraphs, modernized punctuation, and added section breaks where there was a logical break in the text. I also added an extensive general index that references names, topics, etc., and also references Ballou’s entertaining illustrations and parables. Scriptural references have been added in the text where missing, and there is a full scriptural index. An appendix has a brief biography of Ballou, written by Thomas Whittemore a year before Ballou’s death.

This project started almost a decade ago, when I couldn’t find an adequate online edition of Ballou’s Treatise. Scott Wells, Russell Allen, and Steve Rowe all helped produce the Web edition, which went online in 2011. This new print version represents a complete revision of the online edition, with added indices and appendix.

Why bother with a new print edition when the classic Ernest Cassara edition, published by the Unitarian Universalist Association, is still in print? Most importantly, the text of the Cassara edition retains the crazy-long paragraphs of the early nineteenth century editions; adding new paragraph breaks makes the book much easier to read. Then too, I’ve long felt that the index to the Cassara edition was inadequate. Finally, after Cassara’s death earlier this year, there was no longer any hope that he might revise his edition.

The new 2015 edition of A Treatise on Atonement is available now through Lulu.com for $12.99 plus about $3.99 for shipping. In approximately 8 weeks, it will also be available direct through major online booksellers, as well as through bookstores via Ingram distributors, at a retail price of about $12.99 (the minimum price I can set that allows such wide distribution). 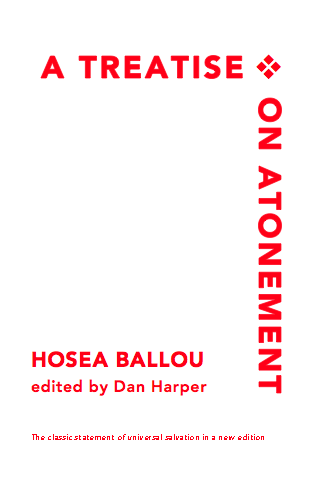 On Thursday, January 31, Amy, the senior minister at our church, and I are going give a class on theological unity within Unitarian Universalism. We’re starting our class with an online conversation about the topic. And I’m going to begin my side of the conversation by listing five areas where I think Unitarian Universalists already have some degree of theological unity:

(2) Human beings must take responsibility for the state of the world: The Unitarian Universalist theologian William R. Jones has argued that humanists and liberal theists have come to resemble each other in that both affirm the radical freedom and autonomy of human beings (“Theism and Religious Humanism: The Chasm Narrows,” Christian Century, May 21, 1975, pp. 520-525). Today, we have a wide consensus that, whether or not we believe in God, none of us believes some larger power is going to come fix up our problems for us — if humans made the mess, it’s up to us to fix it.

END_OF_DOCUMENT_TOKEN_TO_BE_REPLACED

Jack sent Carol and me a link to a wonderful article titled “What if God were a maggot?” which outlines a theology of decomposers:

You can choose who seems holy to you, godlike, a god even, but I’ll take the bacteria and other decomposers. I’ll take the vultures standing on rooftops and fences, raising their angular wings as if in some unchoreographed tribute to Martha Graham. I’ll take the dung beetle. I’ll even take the maggot. Anybody can celebrate a monkey or a panda; they are easy gods, worthy of a simple sort of worship, one of fences and nature reserves. The decomposers are harder. They are everywhere and they need to be, without them nothing would be reborn. Without them we would all be, like the Australians of yore, knee deep in feces and bodies. Without decomposers even the plants would eventually stop growing. Some gods are clever, some gods are beautiful, some gods—it has been said but not proven—are even merciful. You can have those if you want. As for me, I’ll take the maggot and the vulture. I’ll take the bacteria. I’ll even take the catfish rolling in the shallow stink of Techiman’s market, the catfish whose groping mouth reaches up like the afterlife, that tunnel through which, as the poet Yusef Komunyakaa reminds us, we must pass to get to some other side. (You can read the complete article here.)

Whichever point of view you take, I see all this as related to Universalist theology. Classic Universalist theology asserts that every human will be saved, i.e., every human will got to heaven after death. Compost theology asserts that every organism gets saved, i.e., every organism will decompose after death and its constituent elements reabsorbed into the Web of Life — and, according to theologian Bernard Loomer, the Web of Life was what Jesus intended when he said “Kingdom of Heaven.”

This, by the way, argues against the theology of Richard Dawkins, who says that immortality is achieved by an organism’s genes (The Selfish Gene). Dawkins takes a taxonomist’s narrow point of view, in which clades or species are most important. Compost theology, by contrast, argues that cycles and ecological relationships are of equal or greater importance to genes. Dawkins is a fundamentalist: it’s all about genes! Whereas we compost theologians are mystics: all is one, everything is part of an ecological unity.

Peace Pilgrim, the woman who achieved some small measure of renown for traveling “25,000 miles on foot for peace,” was a pacifist deeply rooted in Western religious traditions. Not surprisingly, she held a universalist theology (note the small “u”; I’m speaking of her theology, not implying she was a member of the Universalist denomination). In the collection of her writings, I find this brief response to a correspondent who asked her, “Do you believe there is both a heaven and a hell?”

In the first two sentences, Peace Pilgrim expresses sentiments that can be found in such classic Universalist writers as Hosea Ballou; really, this is a notion that extends back in Western thinking at least to Plato.

The third sentence is at odds with Ballou’s Universalism; for Ballou, God’s power is such that you get saved and put in heaven after death whether you want to be there or not, whether you’re worthy of it or not. By contrast, for Peace Pilgrim your freedom of will continues after death, and remains strong enough to go out of harmony with God’s will. In a sense, Peace Pilgrim is somewhat like the Restorationist Universalists who allow for a time of punishment after death; at least, insofar as moving oneself out of harmony with God can be considered a form of punishment.

The final sentence is a clear statement of universalist theology: “There is no permanent hell.” Whatever denomination they may belong to, universalists all affirm this truth.

An obvious point, but one worth making:

Traditional Christianity, which still dominates the United States, sets up a hierarchy of worth among human beings: all humans may be ultimately equal in the sight of God, but those who will be saved upon dying (sometimes phrased differently: those who accept Jesus as their personal savior, those who are Christians, etc.) will go to heaven and everyone else will not. The humans who get to go to heaven thus feel that they are more equal than the rest of us. There’s a good name for this theological viewpoint: it is called the “limitarian” viewpoint because the number of humans who get to go to heaven is limited.

Today I attended the annual Macedonia Church Singing, a group of people who have been singing shape note hymns on Sand Mountain in Alabama for generations. This is one of the few parts of the country where churches sing in four part a capella harmony from the The Sacred Harp, a four-shape note hymnal, in regular Sunday services. Thus, liturgically speaking it is one of the more conservative parts of the United States; they still conserve some of the old ways of conducting Sunday services that date back a hundred and fifty years or more.

At lunch I sat down across from a fellow who was also singing in the bass section, and when he found out that I was a Unitarian Universalist he grinned and said, “I’m a Christian universalist.” We spent the rest of the lunch hour talking about James Relly — when he found out I hadn’t actually read Relly, he said I simply had to do so — and about Rob Bell, and the Primitive Baptist Universalists, and Hosea Ballou. He probably knew more about universalism than I did, although I was able to tell him one thing that he didn’t know: that Abraham Maxim, one of the composers in The Sacred Harp, had been a Universalist.

It turns out that he belongs to a Methodist church, where he is a Bible study leader. When he became convinced of the truth of universalism, he offered to step down as a study leader, but his church thought it would be fine if he stayed on. I asked about his pastor, and he said that his pastor seemed to have universalist leanings, though of course he didn’t come right out and say so, he just never preached about hell.

You just never know when you’re going to run into another universalist.