It was a strange Christmas Eve. We did the usual Christmas Eve candlelight service in the Main Hall of the Unitarian Universalist Church of Palo Alto (UUCPA) — but the only people there were Amy, the senior minister; Paul, the camera operator; and me. The music all had to be pre-recorded, and I set up my laptop next to my lectern (Amy and I each had our own lectern, about twenty feet apart from each other) so that I could join the Zoom call and be able to hear the music. The strangest part was not being able to see anyone: the whole point of Christmas Eve for me is seeing being able to see people, including the young adults who come back to Silicon Valley for the holidays.

Yes, it was a strange Christmas Eve.

But something that happened in the afternoon made the rest of the day bearable. I was taking a break from checking email, and walked out to the edge of UUCPA’s campus to look down into Adobe Creek, which is routed into a large concrete channel for the last mile or two before it reaches the Bay. By fall, there’s always sediment that has accumulated during the summer, when not much water flows through the channel. This year, there was a luxuriant growth of what was probably water cress, and the last rain had been enough to cut some winding channels through the greenery, without washing everything down stream. The usual Mallards were paddling around, and then I noticed a Snowy Egret crouched behind a thicket of greenery; it lashed out with its bill, and appeared to spear something from the water.

I know Snowy Egrets are good at finding food anywhere, but I was a little bit surprised to see one in that particular urban channelized stream. There must have been enough prey to make it worth the bird’s time and effort; it’s a fairly sterile environment, so perhaps it was finding organisms washed down from upstream. Whatever drew it there, it certainly gave me a lift to see it. 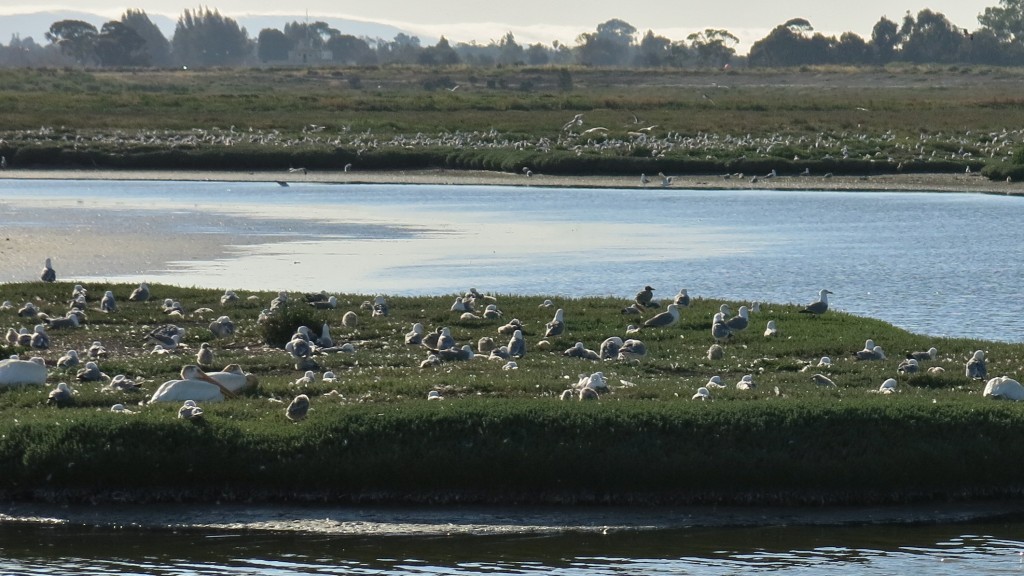