We find out what happened to Akhenaten….

As usual, full text is below the fold.

END_OF_DOCUMENT_TOKEN_TO_BE_REPLACED

The Pharaoh Akhenaten decides to get rid of all the old gods. Queen Nefertiti doesn’t agree. The Chief Priest has an idea….

As usual, the full script is below the fold….

END_OF_DOCUMENT_TOKEN_TO_BE_REPLACED

There used to be a Unitarian curriculum on the Pharaoh Akhenaten, purportedly the first monotheist, maybe the first unitarian. This is my take on the Akhenaten story….

As usual, the full text of the script is below.

END_OF_DOCUMENT_TOKEN_TO_BE_REPLACED 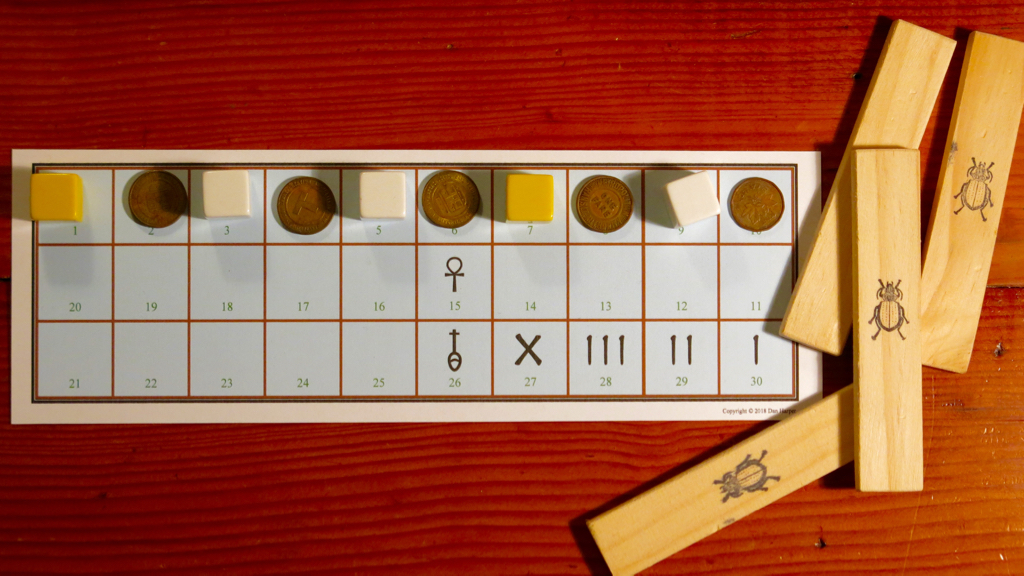 Isis is a well-known Egyptian goddess who needs little introduction. This beautiful little sculpture of Isis dates from a period when the Romans ruled Egypt; so Isis is wearing an Egyptian headdress, but she’s also wearing Roman clothing.

She is shaking a sistrum, an small percussion instrument that was used almost exclusively by women. Kara Cooney, a professor of Egyptian art and architecture, interprets the sistrum in terms of sexuality: “The sistrum was a kind of rattle — a wooden handle supporting bars of metal, each piercing small rings that clanged together when the instrument was vibrated. The sistrum itself represented human sexuality — round objects penetrated by a phallic rod holding them in place” (1). This interpretation could be accurate, but it could be overly influenced by Freud and Co., and therefore anachronistic.

The archaeologist Joyce Tyldesley offers another interpretation; she says the sistrum, which “was played only by women,” was “a rather large loop-shaped rattle with a long handle, often featuring the head of Hathor [another Egyptian goddess], which had initially represented the papyrus reeds of the Nile Delta where, mythology decreed, Hathor had been forced to hide with her young son. Eventually the sistrum lost all trace of its original meaning and instead started to serve as a religious symbol for life itself. It consequently become absorbed by other deities, and was particularly identified with the cult of Isis at the end of the Dynastic period.” (2) And this sculpture in fact does date from the end of the Dynastic period, the time when Isis had taken over the sistrum form Hathor.

Thus in this sculpture, we see the goddess Isis at the end of some three millennia of change and development. She is wearing the flowing robes of Rome rather than the simple sheath dress of Dynastic Egypt. She wears a headdress that identifies her as Isis, though it is not the older stepped headdress of Isis seen in sculptures from 500 years earlier (see, e.g., the sculpture of Isis below, from c. 685-525 BCE). And she has taken over the sistrum from Hathor and other goddesses.

Although their adherents may say otherwise, art and material culture does not show gods and goddesses as unchanging and fixed; instead, they grow and evolve over time.

Taweret is one of the deities who was a fairly common presence in ancient Egyptian households. Sculptures of Taweret have the head of a hippopotamus and the body of a female human being, and the arms and legs of a lion (note 1); though of course the physical manifestations of ancient Egyptian deities were not thought to adequately represent the actual deity. Sculptures of her “held the attribute of the sa [an ancient Egyptian symbol of magical protection] in her hands and sometimes also the ankh or a torch, the flame of which was supposed to expel typhonic forces” (note 2).

A statue of Taweret would typically stand in a niche in a house, with perhaps an offering table. A Taweret sculpture might also be placed in bedrooms, to prevent sleeping humans from being assaulted by demons or ghosts. According to some accounts, she was married to the god Seth (note 3).

Below is a fine tiny sculpture of Taweret, made of faience sometime in Dynasties 26-30, now in the Boston Museum of Fine Arts (accession number 64.2252). She is holding the sa, and you can see her hippo head, human body, and lion limbs. She is fearsome enough to give you a measure of assurance that she will indeed protect you, as a household god should; but she also appears friendly enough that I would not mind having her in my household.