For the past five years, I’ve been researching Unitarians who lived in Palo Alto from 1895 to 1934, and writing short biographies of these ordinary Unitarians. I’ve finally collected these biographies and printed them in a perfect-bound paperback book, Available on Lulu.com either as a print copy for $10.84 (plus whatever Lulu charges for shipping and handling), or as a PDF download. The Introduction to the book appears below the fold. 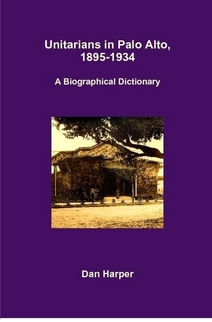 The first chapter of this book has biographical entries for the few people we know were associated with the Unity Society.

The second chapter, a much longer chapter, has biographical entries for many of the names appearing in the extant written records of the Unitarian Church of Palo Alto. There are also entries for a few other Unitarians who lived in Palo Alto, but who were apparently not affiliated with the church. The second chapter also highlights six multigenerational Unitarian families, giving several examples of how Unitarian affiliation continued across generations. Family groups are preceded by a family tree, and each family group ends with a typographical ornament.

Why a biographical dictionary

This book represents my interest in telling the stories of ordinary Unitarians. Most historical accounts of Unitarianism focus on institutional history at the denominational or congregational level, or on the biographies of prominent Unitarians. Institutional histories typically focus on ministers and perhaps other paid staffers such as musicians; famous persons who are part of the institution; and prominent lay leaders. However, given the realities of sexism, racism, and class bias, histories of this type will tend to minimize the importance of women, children, non-white persons, working class persons, and less-educated persons who are part of Unitarian congregations.

This book also represents my interest in telling the stories of Unitarian women. In Palo Alto, there were Unitarian women in leadership positions beginning with the Unity Society. The Women’s Alliance of the Unitarian Church left excellent records, documenting how women provided funding and lay leadership for the congregation as a whole. A biographical dictionary which includes most of the people in the congregation places equal importance on men’s and women’s stories.

I am also interested in trying to document the complex net-work of relationships which arguably are the most important element of congregational life: more on this below.

The questions that remain

Originally, I had hoped to be able to do statistical analysis of the Unitarian Church of Palo Alto, particularly to investigate socio-economic class status. I wanted to answer questions like: How many had college degrees? How many had servants living in their homes with them? How many had passports and were able to afford overseas travel? However, I soon realized that ac-curate statistical analysis was not possible without an accurate list of everyone who was affiliated with the church. Membership rolls and donation records are no longer extant, and I estimate that I had the names of perhaps only half of the members of the church. Thus statistical analysis is impossible, and these questions remain unanswered.

A related question: many of the Stanford professors and students who were part of the church seem to have been affiliated the German department, more than would have been expected by mere chance. This may be related to the apparently large percentage of first and second generation Germans mentioned above, but still we have to ask: Why so many German speakers? The answer may be because of the prominence of German as an academic language in the early twentieth century; social networks among German speakers; or even because of strands of liberal religion among German immigrants made them sympathetic to Unitarianism. Yet this question also remain unanswered.

In short, this biographical dictionary offers incomplete answers to what I hope are some interesting questions. Perhaps future researchers will be able to investigate these and other questions, to learn more about how ordinary people experienced religion and religious institutions.

Inevitably errors appear in a complex research project like this, which extended over five years and took hundreds of hours. Up to the moment the book went to press I was correcting typographical errors, errors of fact, and errors of interpretation; but finally I had to move on to other projects. I apologize for the many errors that doubtless remain uncorrected.