A few months ago, I wrote about prototyping “Exodus: The Card Game,” a game based on the wanderings of the Israelites. After lots of play with both kids and adults (and lots of changes to the rules), prototyping is finally done. I made 6 decks using the online printer Board Games Maker; the printing quality is excellent, and here’s what a deck looks like: 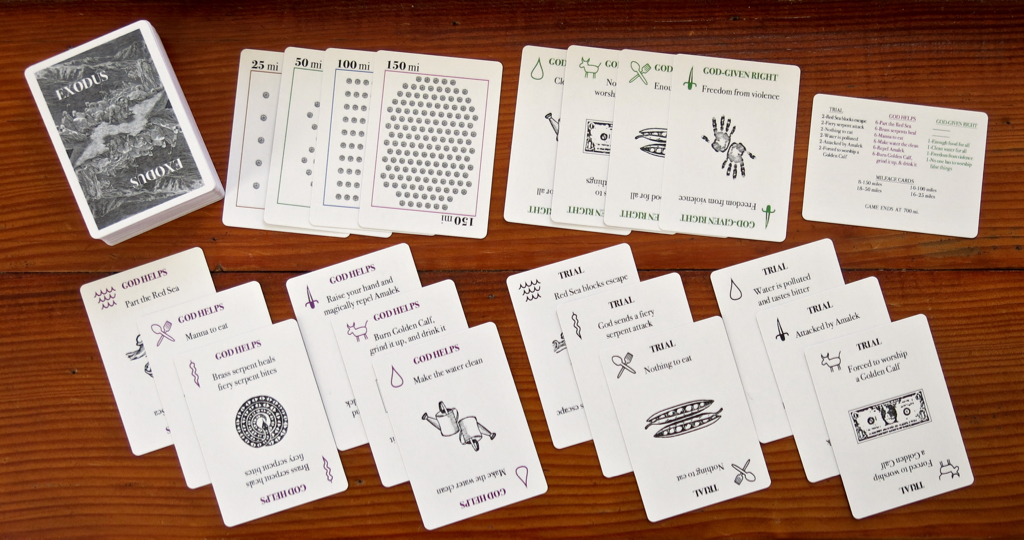 One of our curriculum goals in our Sunday school is to play more games. “Exodus: The Card Game” is designed to supplement an upper elementary or middle school unit on the Hebrew Bible. Once you learn the rules, play takes about 15-20 minutes, so it fits nicely into a typical Sunday school class time. And the rules are fairly simple and straightforward; I’m including them below the fold so you can get an idea of the game.

The only problem with this game is the price. I bought 6 decks, and the price including shipping and handling came out to just under $25 per deck — pricey for a card game. (If I printed 1000 decks the price would drop to about $6 per deck, but what would I do with 1,000 copies of this game?)

If you’d like to buy a copy of the game, email me and I can get you a single copy for about $27. (There’s a price break at 6 copies, which knocks approximately $2 off the price; next price break is at 30 copies.) If you’re going to the Pot of Gold religious education conference in Sacramento on Sept. 29, I’ll have a few extra copies of the game to sell.

You’re the leader of one of several bands of Israelites, people wandering through the wilderness on your way to the Promised Land. On your journey, you are helped by a powerful and mysterious being you call God.

It’s a 700 mile journey through the wilderness. On your journey, you face Trials, problems that God can help you solve. Will yours be the first band of people to reach the Promised Land?

Your goal is to be the first player to add mileage cards to your Mileage Pile adding up to exactly 700 miles.

2 to 4 players may play. The dealer gives everyone 6 cards.

When it’s your turn, you EITHER draw from the top of the Main Deck OR draw the topmost card from the Discard Pile.

If you draw from the Discard Pile, you must then discard a card from your hand; that completes your turn.

No one can play more than one (1) 150 Miles Card on their Mileage Pile.

If another player plays a Trial Card on your Trials Pile, you cannot play any Mileage Cards until you cover the Trial Card with the matching God Helps Card (see Listing of Cards).

You can play a God-Given Right Card AT ANY TIME (even if it’s not your turn) by saying “GOD-GIVEN RIGHT!”

Place the God-Given Right Card face up in the middle of the playing area, and draw a card to replace it in your hand.

Now it becomes your turn, so draw another card and take your turn. After you finish your turn, play goes to the player on your right, and play continues from there. Once a God-Given Right Card has been played, EVERY player is now protected from the matching Trial Card. Example: If you play the “Enough Food For All” God-Given Right Card, then no one can play the “Nothing to Eat” Trial Card for the rest of the game.

The first player to play 700 miles on their Mileage Pile wins the game. You must reach 700 miles EXACTLY. 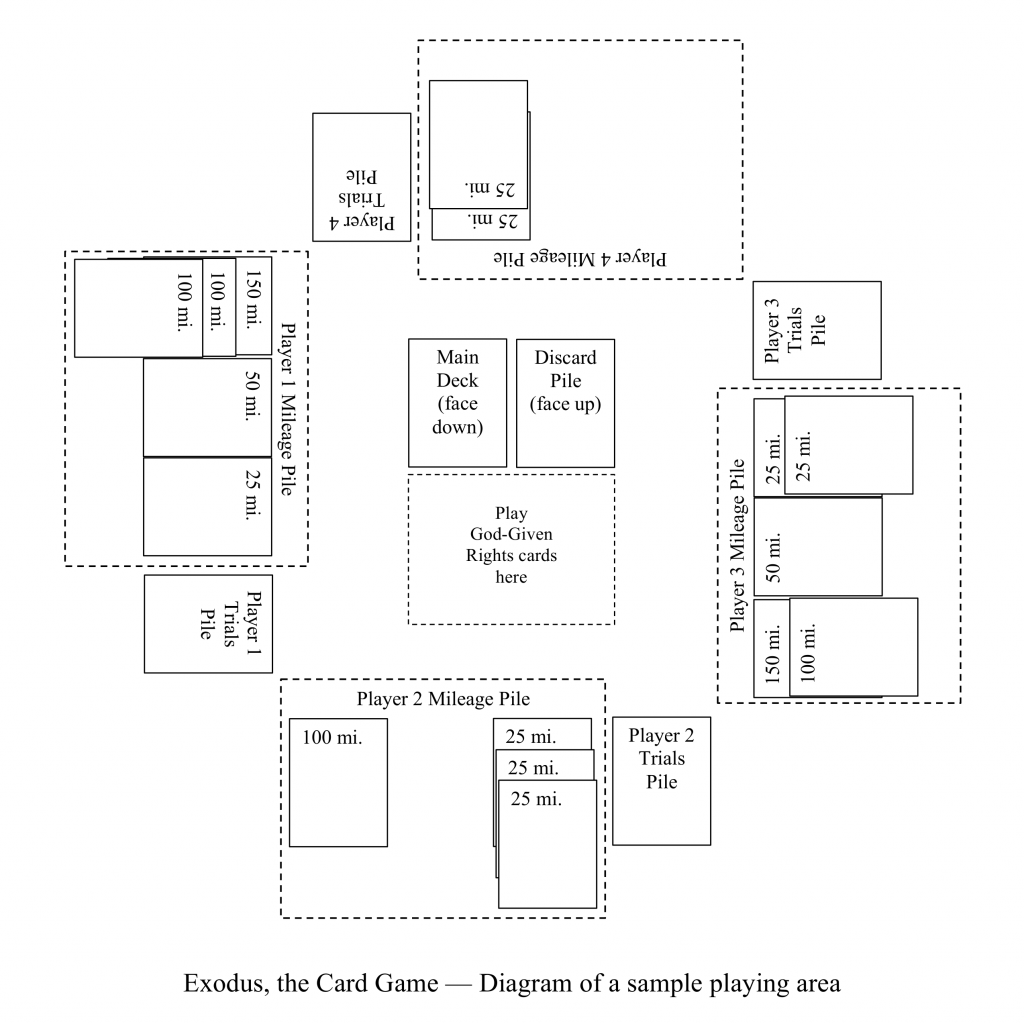 Game extension: When one player reaches or passes 600 miles, any player can ask for a game extension to 1,000 miles. Now the first player to reach 1,000 miles wins.

For 6 or 8 players: Six or eight players play in pairs, with each pair sharing a Mileage Pile and a Trials Pile. The dealer gives 5 cards to each player. No player may show their hand to any other player (including their partner).

The story behind the game:

“Exodus: The Card Game” gets its story from the Book of Exodus in the Bible. Each of the Trials in the game is one of the challenges that Moses and his followers had to face after they escaped from the Pharaoh in Egypt and journeyed through the wilderness to reach the Promised Land. Here are the challenges Moses and the Israelites faced, and the way their God helped them over-come each challenge (in the order they appear in the Bible):

The book of Exodus is not supposed to be an accurate historical account, nor is it supposed to be a scientific explanation. Instead, it’s a story filled with awesome and fantastical elements that are meant to reveal God’s character.

What does the Exodus story tell us about God’s character? First of all, God is not all kittens-and-rainbows, as for example when God makes the Israelites drink the ashes of the Golden Calf; God is a fearsome and awe-inspiring deity. Second, God does not follow human logic and is ultimately unknowable by humans, as for exam-ple when it is God who sends the fiery serpents to harass the Israelites. Third, while God might not be kittens-and-rainbows, God does want justice for humans and for the land; the game emphasizes God’s desire for justice with the God-given Right Cards. Finally, the Exodus story tells us that what people do makes a difference, that is, God gives humans free will. Furthermore, God can be forgiving; so when the hu-mans decide to do something stupid with their free will, like worshipping a Golden Calf, God may help them get past their stupidity. So it is the game aims to give a small sense of the character of the God of the Israelites, as that character is revealed in the story of Exodus.